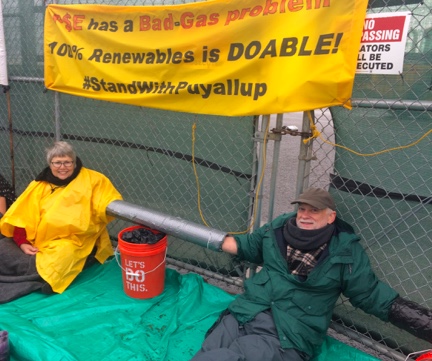 Lock yourself to your love. Sounds sweet, yeah? How about locked to your love to block the gate to a construction site at the crack of dawn, assuming you’ll be cut out and arrested hours later?

Jan and Gary Woodruff are an extraordinary couple. I met them a couple years ago, in the lead up to Break Free, three days of action in Anacortes targeting the two oil refineries there. Jan and Gary were living in Anacortes at the time, and Jan had been researching three high-incidence cancers in the area. She engaged in her first direct action in 2014, when she locked her arm in a concrete barrel on the rail line to Tesoro’s refinery, to protest the dangers of shipping oil by rail. Gary has filled critical action support roles over the years–making sure there are enough port-a-potties for crowds, ferrying materials around, being a go-to troubleshooter during an action. He had never risked arrest at an action–not until Block the Gates on December 18, 2017, when a couple hundred people blocked the gates to Puget Sound Energy’s LNG construction site in Tacoma.

I interviewed Jan and Gary to learn more about their story and their motivations, and to ask their advice for other retirees, as well as for younger people dipping their toes into this movement.

What did you do before you retired?

JW: I’m 64 and retired from being a marketing consultant in Portland.

GW: I’m 66 and am a retired construction manager.

So you locked yourselves together, why?

JW: We want to make a difference–we want the world to be a better place. We feel obligated to stand up for what’s right.

GW: We older folks have an obligation, basically. We had decades of privilege, had things go our way. We’ve made money, been big consumers…and now realize that wasn’t the right thing to do. We’re doing this in part to repair the damage that’s been done by our age group, by being lucky enough to be born with the opportunities that we had. Other people don’t have that, and the more you realize that, you see…something’s gotta change.

But, why lock yourselves together? I mean, you could have done something else.

JW: Climate change is an emergency and requires emergency measures.

GW: To bring attention to this issue–to the expansion of fracked gas here. Locking ourselves together, risking arrest….it makes people wonder why are there people out there with their hands in tubes. And then we can tell them why.

JW: Being older white people, our presence is disarming to the police; it makes them think twice about using drastic measures. I think it’s important for old bodies to be on the line for that reason if nothing else.

GW: We’re trying to change that head-in-the-sand mentality that seems to prevail out there.

What made you care so much about climate change?

JW: I came into this more from a NIMBY point of view. I discovered that Anacortes had high rate of cancers, and I wondered what was going on. Once I went down that path, I started learning more about the refineries and climate change. I got a nasty little education.

I don’t know if it would have been better to learn earlier in life, and live with that cloud over me. It comes as a bigger shock when you’re old and you believed in the American dream.

GW: – We’ve traveled a lot and been to a lot of places where the light bulb has come on at a zillion watts, seeing people who have been completely screwed over. 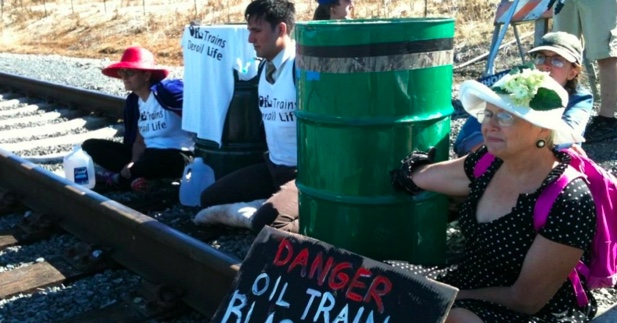 Aren’t your afraid of getting cut out of the lockboxes? That part makes me nervous.

JW: I have a lot of trust. I know everyone planning these actions takes safety very seriously. The trust comes from the warmth, you feel taken care of. You know you are taken care of if you need something. The planning, the safety precautions. We’re doing our civic duty in a safe way.

GW: The lockbox didn’t bother me much to do that; I guess because I could have left anytime I wanted to as well. I didn’t have an issue unclipping.

JW: Is it not the saw they take casts off with? They wouldn’t take that chance–they don’t want to get sued. Does that mean we still believe in America? (laughs.)

OK – how about having to wear a diaper when locking down?

GW: I’ve only worn them once and they were fine and dandy. And they add some padding.

To something lighter – how did locking down together affect your relationship?

JW: How did co-criminality help our relationship? What a way to bond!

JW: We support change agents. We’re social people. I find like-minded people. It certainly has created this little rag-tag family for us.

JW: Respect. Caring. The support you get in an action. People feeding you sandwiches, people massaging your shoulders. Trust. Honesty. I cannot imagine life without this…really. I don’t know what we’d do. 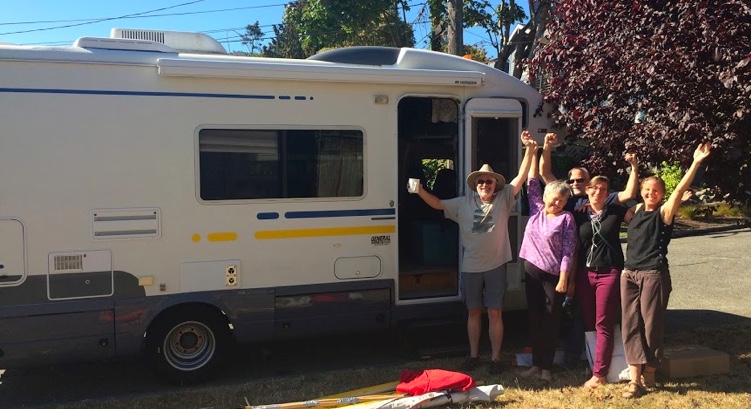 Tell readers about the Goose.

JW: It’s an RV in service to the frontlines. The night we woke up in Olympia (during the tarpee encampment on the statehouse lawn), it was 4 in the morning. The police car lights made me delirious.. red lights. Like a psychedelic disco. The cop knocked at the door. “Ma’am you’re gonna have to move the RV.” It was a little freaky.

They [cops] know exactly when to come; when your brain is asleep.

Sometimes we take the Goose to marches and the med team can work out of there. Or sometimes we have children come sit in the Goose. It’s a hospitable place for people to come in out of the cold and rain.

You’re both so wise. What advice do you have for other retirees? People who may be hesitant to join.

JW: The world is in a state of emergency … there are thing you can help fix if you want to get involved. What’s your legacy? Did you do something to help?

GW: One of the key things for older people is they don’t know what they can do to help. It can be simple things.

JW: There’s this mind switch you have to go through … Americans think you have to do something big — but it’s opposite. It’s the little things that add up.

GW: All gifts are cherished and treasured. Whether you made cookies for a meeting, locked down, or sat next to somebody who was locked down. Or you send $10/month to support the actions.

JW: This movement will give you all the challenge and all the social interactions you could ever want. My family says “she has the courage of her convictions” about me. And if you believe something is wrong, you must act with integrity toward it. I’ve always been that way and that’s why I’ve been in trouble and a troublemaker and a rebel.

You seem really happy and fulfilled being part of this movement.

JW: Gary and I have been support for each other since teenagers. Being and working with wonderful, skilled, supportive changemakers facilitates our journey to reach our highest potential.

Want to join Jan and Gary in engaging in direct action to stop new fossil fuel infrastructure from being built and to support climate justice? Sign the Pledge of Resistance today.