I’ve heard a lot about the Amazon, but not about our forests. Are PNW forests good carbon sinks?

The giant conifer forests of the Pacific Northwest (“giant conifers” are defined as mostly doug fir and sequoia; our forests are mostly the former) store more carbon per acre than any other forests in the world, and almost twice as much as tropical rainforests. 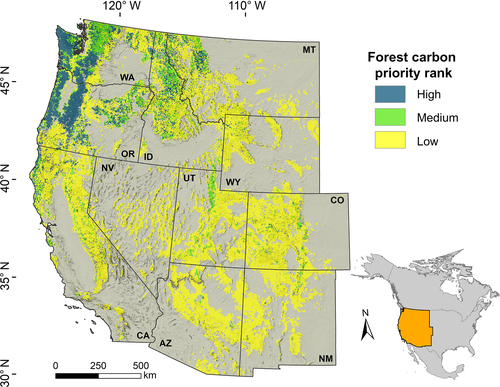 In other words, our forests can help save the world…if we save them.

Alas, very little, and not for very long (average building life is 60 years; trees can live for many hundreds of years). When a tree is cut down, most of its carbon is released through waste during harvest and manufacturing (see graph below, taken from p. 10 of this excellent document). And while another tree may be planted, that tree will take decades before it approaches the carbon storage of the cut tree. We need to keep carbon in the forest now, not replace it 40-80 years from now. If the tree is cut as part of an industrial clear-cut, as most are, it’s even worse—much, much worse—because carbon is released not only from the tree, but also from the forest soils, which actually hold most of the carbon in the forest: 53%, to be precise (page 3, US Forest Carbon Data). Clear cuts = devastation: major carbon loss from the vegetation and soils, depleted water supplies, loss of homes for wildlife, and increased drought.

Logging is Oregon’s biggest source of emissions; in WA, it’s estimated to be 3rd. 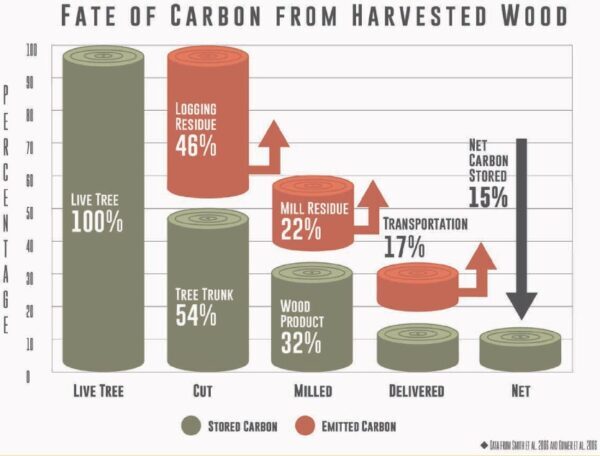 Below is the carbon in all forests/wood in the US over the last 30 years. (Given the figure of 15% above, imagine what our forest carbon would look like if those last gray bits on the bars hadn’t been logged.) 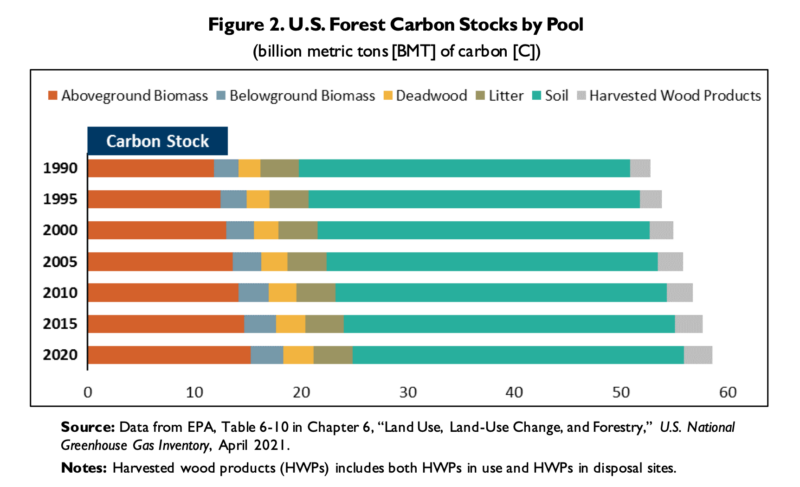 But don’t trees absorb a lot of carbon in their first decades of growth?

Nope. That’s industry disinformation. Young trees store carbon at a faster rate, but their total mass is small. Think of it this way – would you rather make 10% on $100 or 5% on $1,000,000? It’s the total mass of carbon that matters. Older trees store more carbon in total than young trees. In some species, 75% of the carbon is stored  after the tree is 50 years old. Old trees are critical to our survival.

Why is clear-cutting even worse than wildfires?

What about Cross Laminated Timber–that’s sustainable, isn’t it?

The main rationale for viewing CLT as sustainable is that it can be milled from small-diameter trees (in other words, there’s no need to fell old growth, nor “legacy forests” that may have been cut in the 1800’s or early 1900’s, but which have regrown as natural forests), as well as beetle-damaged wood. However, there’s no guarantee that CLT will be made from these sources, and oftentimes these sources require the use of chemicals, fertilizers and other inputs to grow short rotations. In other words, plantations/tree farms are hard on the land—and if the use of CLT grows considerably, it will require ever-more-unsustainable levels of harvest. Also, while small-diameter trees can be harvested in a way that’s sustainable and that helps forests be wildfire-resistant (listen to the wildfire episode here) by using thoughtful selective logging and prescribed burns, that’s not how it usually is harvested, which is in monocrop plantations on a short rotation.

For the most part, no. Across the west we have hundreds of millions of acres of forests, and hundreds of millions of grasslands and shrublands. Trying to thin these vast landscapes to affect fire behavior is like trying to take a cup and make the ocean less wet. The odds that a particular thinned patch of forest will burn is less than 1%. If we are lucky, and a thinned and burned patch later burns in a wildfire, before that patch grows back, then it might alter fire behavior, but only if the conditions are not extreme.

How about post-fire logging after fires?

Sadly, that’s no good either. Fire disturbs forests and makes them more sensitive to impacts from logging. Post-fire logging increases loss of soil, removes the remaining carbon, and sets back forest regeneration. If your kid has a burn, you don’t give them a salt scrub. Instead you treat the injury with utmost care until it heals.

For the sake of both housing justice and climate-friendliness, we need to build a lot of affordable housing. Concrete is a carbon disaster, isn’t it? What do we do?

Concrete is complicated. Right now, it is a carbon disaster in the short-to-medium term. Over the long term, not as much: about 55% of the carbon emitted in the production of concrete since 1930 has been reabsorbed from the atmosphere by the concrete, and this reabsorption continues. But as mentioned above, what happens now is the biggest issue, so let’s ignore that for the moment. Lower-carbon concrete is one answer, but that term covers pretty much anything that isn’t standard-issue, and one immediate goal should be to reduce waste, since it’s estimated that commercial projects in the US and Europe use twice as much concrete as is necessary or useful (this is because concrete is cheap and labor is expensive, so contractors will simply over-pour concrete at every step if it means they save a few minutes here and there ensuring that they have the right amount). Overall, the best way forward is probably 1. Selective use of wood, including CLT, but only from the most sustainably managed plantations (FSC, at a bare minimum) 2. Incentives for reuse of wood in existing buildings to be torn down 3. Mandating lower-carbon concrete and greener steel for all government contracts (which requires writing it into the code, as Marin County has done) and 4. Making sure we’re ready to act fast if something new comes to market (this may also require code changes).

It’s wonderful stuff, but it has little structural strength, so it has to be used with (usually timber) framing. It’s best used with plaster on top as exterior walls/insulation/interior walls.

What about communities that rely on logging? How can we help support them, and ensure a just transition?

One thing that’s important to understand for context is that most of the jobs that have disappeared from logging have been a result of consolidation, the export of raw logs rather than milled wood, and mechanization…not environmental laws. (As an aside, that same mechanization requires clear cuts of even-age timber, planted too close together, in monocrops, on shorter & shorter rotations; the massive machines require new roads, and destroy soil.) Here are some of the dirty tricks that corporations have been up to. And these are bigcorporations…Sierra Pacific is the largest corporate landowner in the United States.

Still, it’s critical to support rural communities to take care of their forests rather than cut them down. The mills are always hiring–not because they’re growing, but because they can’t keep people; in last summer’s heat dome, some closed down in the day to protect the machinery, then started up again late afternoon, when the humans were still very much at risk. We deserve better work than this. Reforestation (restoring existing forests) and afforestation (planting new ones) should be a critical piece of this; given the importance of PNW forests to the climate, we should be pushing for federal monies to preserve, reforest, and plant anew. For some examples of what some of this might look like, check out the PNWFCA Green New Deal for Pacific Northwest Forests and the Coast Range Association Green New Deal for Private Industrial Forest.

What about non-building products that we need, like paper?

Approximately 6% of logged trees in the PNW go to making pulp, rather than building materials, but using waste products from wheat, as well as hemp, makes a lot more sense.

Don’t rural schools depend on logging?

Nope. Revenues from state trust lands provide minimal funding for programs such as the Common School Construction Fund; a measly one to six percent in recent years. “This is not the future of school construction. It just isn’t,” said the Washington State Superintendent of Public Instruction, Chris Reykdal (BNR meeting).

To Northwest Public Broadcasting, he added “Step one for me is to extract schools out of this question, stop letting people use school construction as the excuse to harvest…it should be about managing our forests for the best outcomes.”

Okay, it clearly makes sense to have a moratorium on the logging of older trees on public lands. What about private lands?

The state can’t stop logging on private lands, but the Department of Natural Resources (DNR) issues permits for logging, so it has the power to mandate better practices, like long rotations (how long trees are allowed to grow before harvest). Harvest cycles have declined from about 120 years to only 35 or 45 years–despite the fact that productivity peaks at 80-125 years. This article talks about rotations, and recommends a minimum of 80 years. This may be a short-term problem for industry, but it’s only that–because of how wood grows, if the wood products industry moves away from short-term thinking, they’d actually profit more: trees grow faster as they age.

Would such a moratorium mean we wouldn’t have enough wood in WA for WA needs, and would have to buy from British Columbia, which is even worse? (BC is considered “the Brazil of North America” when it comes to forest policy.)

As of the last available Mill Survey (in 2016; the DNR under Commissioner Hilary Franz has stopped publishing them), only 16% of cut lumber in WA was from DNR lands….and 28% of cut lumber was exported by private companies as raw logs (DNR is prohibited from exporting raw logs, which is more profitable). So the availability of wood in WA (as well as the jobs connected to mills) has much more to do with whether logs are being exported or not, than what happens to older trees on DNR lands. (*We’re looking into whether it would be possible for the DNR or the Governor to prohibit export of logs from private lands, but it’s not clear that there’s a mechanism available.)

This is all really complex. Can you give me a simplified version of what 350 Seattle thinks should happen?

Yes! It is complex–it took us weeks (and many emails with scientists and policy folks) to hammer out this FAQ, and a lot of the science is new in the last 10 years or so–we’ll keep on top of it as new information becomes available, and alter our positions if need be. But meanwhile, our shorthand for what we need to see is: