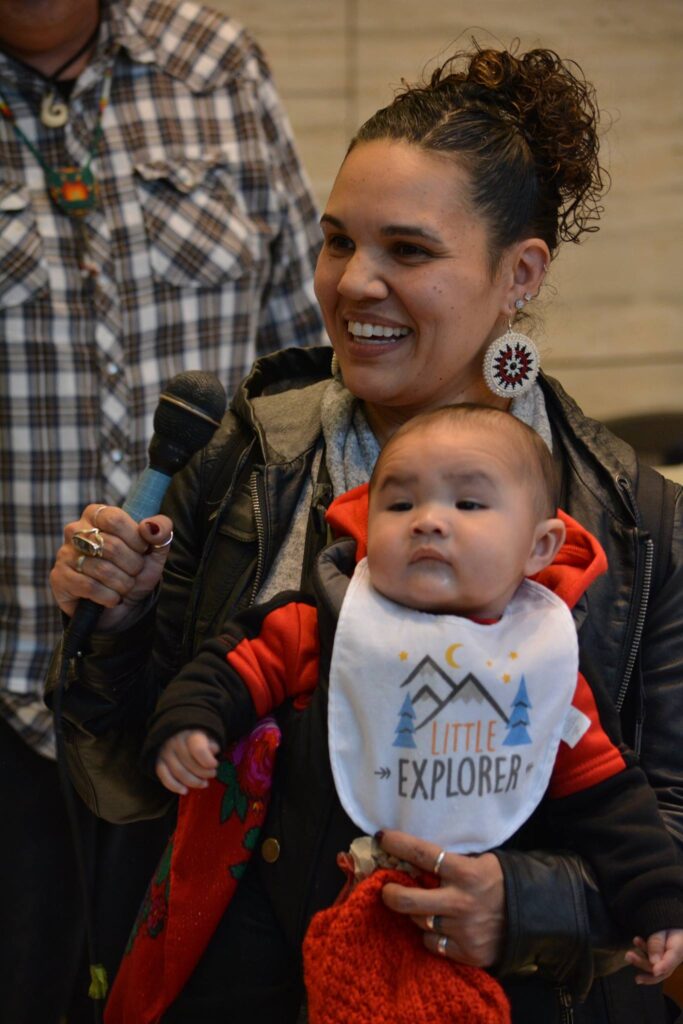 Rachel and her son Dahnahhi

Bio: My name is Rachel Heaton. On my mother’s side, I am a member of the Muckleshoot Tribe and a descendant of the Duwamish People. On my father’s side, I am of European descent. I am a mother to 3 beautiful children, Mercedes, Nylah, and Dahnahhi. In recent years, I was part of the coalition that led the city of Seattle to divest from Wells Fargo and also became co-founder of the Indigenous-led divestment organization, Mazaska Talks. I have traveled around the world speaking on this topic, and continue to do this work to bring attention to the destruction of Mother Earth caused by the funding and investments provided by Wall Street banks to the fossil fuel industry. I also speak on the violations of our rights as Native and Indigenous peoples and find ways to educate and bring awareness to those outside of my community. In my day to day job I am a culture educator for my tribe, working to learn, build, and sustain our cultural practices.

AD: I’d love to ask first of all how you became an activist.

Rachel: For me, it started with my mom. She was an activist. I wasn’t raised by her, but she was an activist. My oldest daughter’s grandfather was a political refugee who was in prison for four years in Argentina for standing up against the government. And as a result of that, ended up here in the United States. So, it’s been around me. But for me, personally, I was going through some challenges, just trying to understand my place in my tribal community. And really trying to find my own purpose, wanting to contribute to something bigger. And I didn’t know what that bigger was. Then, the call for Standing Rock happened. I remember I started paying attention to it in early spring of 2016, and then in the summertime, they did a call for Native people to come. It didn’t matter what tribe you were from or who you were. We knew that this pipeline was going through treaty territories and the Army Corps of Engineers did not have the approval to do it—all of the things that tie into being a Native person, so it just clicked in all of those ways. There was a call out to my tribe to send supplies and things over. So, I immediately called and was like, hey, I want to go. And then I ended up organizing the trip and going out there with 13 other individuals. I took my children out there. And then I went another four times after that. And then it just grew from there.

AD: What was so special or galvanizing to you about Standing Rock?

Rachel: I’d never seen so many Native people in one place come together and support something of this scale. It was just interesting for me to see how big a movement could get. Of course, it’s mind-boggling to see how these moneymaking corporations can still make something like that happen. I guess that was a piece of it, but then to see the camaraderie and everybody coming together and supporting one another. Mazaska Talks didn’t start right away when we came back from Standing Rock. We were, at the time, just trying to bring attention to Standing Rock, and Matt Remle, who is the original author of the Ordinance for Indigenous Peoples Day, found out through the relationships that he had built that the City of Seattle was banking with Wells Fargo. We were having these conversations, asking how we could get more than just one rally, how we could get people to understand. And we thought, why don’t we focus on the banks that are financing these pipelines. From those conversations, it just started growing. And then, once the city of Seattle divested, there was a coalition of people. It was Indigenous-led, and we made sure that that was the message throughout the divestment work—that Indigenous people were involved. That was the message behind Standing Rock, so we really wanted to keep that momentum going, and that’s how Mazaska Talks came about.

AD: Why is divestment an important strategy?

Rachel: So, obviously divestment isn’t a new tool. It’s definitely been a strategy that communities and groups have used in the past. But it’s important because it gives us a way for people who don’t have money to put power behind a movement. When you think of big banks getting bailed out or fossil fuel projects receiving loans–everyday people just don’t have those sorts of financial resources. But divestment gives a person some power, or the ability to contribute to a bigger picture, a bigger message. I think divestment has really given us a way to get a message out there. Mazaska is the Lakota work for “shiny metal,” so Mazaska Talks translates directly to “money talks.” We have to get those big corporations and banks where it hurts. So that’s why divestment became important. And it was something that we could talk about to the everyday person and say, hey, this is how you can help. Whether by pulling one’s own money out of a bank that’s investing in an immoral and unethical project, violating human rights or desecrating Mother Earth, or, on a bigger scale, by pushing cities and larger entities to divest their billions and billions of dollars—it’s a tool for people to move that money elsewhere, to come up with a solution that would better serve our communities. And if we’re going to divest money from one of these banks or corporations, we’re also going to invest that money back into our communities.

AD: Can you say more about the way in which extractive industries have impacted Native communities in particular? How are colonization and the climate crisis connected?

Rachel: As Indigenous people, Native people, we’re stewards of this land, which means that as the original peoples of this land, we feel it’s our responsibility to take care of the land and to educate others on how to take care of the land. As colonization took place, that ability was taken from us, and over the years, that of course has led to the various blood-sucking ways that the fossil fuel industry desecrates Mother Earth. We are a threat to those industries. Because if we’re protecting something, they have to forcibly remove or displace us. And then the violation of the land becomes the violation of Indigenous rights.

As Native people who still live on these lands, and have for the thousands of years, we depend on the land. So, we’re directly affected by decisions that are made by these industries; for instance, to change the direction of our rivers. When dams are built, our fish can’t spawn. And that is directly related to our well-being, our food sources—our ability to hunt and fish and drink the water.

We can’t talk about racism and not talk about environmental racism. Our neighborhoods and our communities are the first ones affected. Of course, eventually, it’s going to affect everybody. Standing Rock should have been a prime example. The more direct violation was putting the pipeline through sacred lands, but the pollution of that water would eventually affect 18 million people who aren’t Native. Eventually, these decisions affect everyone, but we’ve been feeling the impact since we were moved to reservations. And we continue to see that impact through privatization and continued land grabs, whether it’s for water or to run a pipeline through. I think we see the direct correlation between colonial mindsets and environmental degradation on a regular basis.

AD: What do you see that brings you hope?

Rachel: I think the biggest thing is having my kids see my work. My kids are witnessing and recognizing how important it is to be part of these conversations. I took my children out to Standing Rock. I got a lot of flak about it from people, but I wanted my kids to know it’s not just about activism … it’s a way of life. It’s who I am as a Native person. And it’s even bigger than that. It’s about having a better place for all people. The biggest gift that I have is taking over a bank and wearing my son in a pack and knowing that he sees that. For me, it’s important for my children to witness us making these changes, and to understand that they’re going to be the ones either benefiting from what we’re doing, or continuing that work themselves.

In your heart, you know we’re right