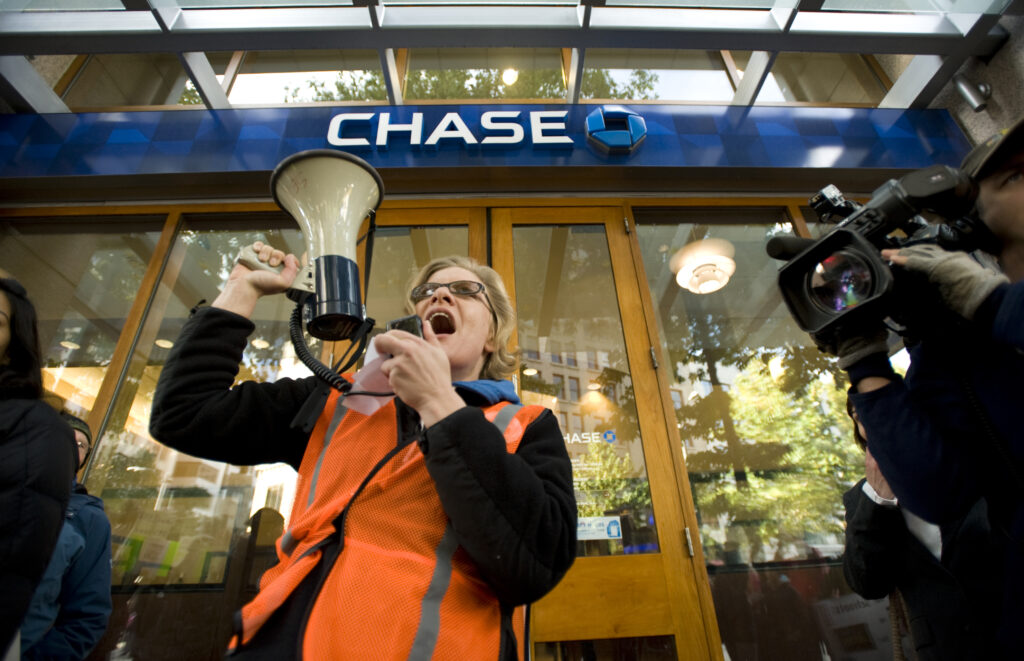 For two years now, we’ve been campaigning to force JPMorgan Chase, the nation’s largest bank, to stop funding climate disaster. Here’s the story behind the campaign ― an overview of the problem we’re trying to solve, a history of what’s happened so far, and a preview of what’s coming next. We hope you’ll join us.

Despite the fact that 80% of known fossil fuel reserves must be left in the ground to avoid climate catastrophe, fossil fuel companies continue to spend hundreds of billions every year building new coal terminals, new oil pipelines, and new LNG facilities. Every one of these projects locks in decades of climate pollution ― and commits us to a future of ever more wildfires, hurricanes, sea-level rise, and species extinction.

That’s the basic premise of our Chase campaign. Now, here’s what happened so far.

In January 2017, Trump signed an executive order to force through the Dakota Access and Keystone XL pipelines. Within months, oil was flowing through the Dakota Access pipeline ― and soon, it was being reported that TransCanada was moving pipeline to South Dakota to start construction on the Keystone XL. With the White House in the hands of a dangerous climate denier, there seemed to be little that we here in Seattle could do to stop this monstrosity.

But, there was one option left open to us: follow the money.

The Keystone XL would cost TransCanada $8 billion. Even super-wealthy fossil fuel companies like TransCanada don’t have enough money stashed away to pay for a pipeline that expensive without relying on major bank loans. And so, after talking with our friends at Mazaska Talks, we decided to launch a campaign targeting the TransCanada’s largest funder: JPMorgan Chase.

We started by going to City Council. Thinking that a potential $3 billion customer would have some sway with Chase, we pitched the idea of Seattle City Council passing a resolution committing the City to avoid banking with any bank that funds the Keystone XL pipeline. Councilmember Sawant agreed to sponsor the resolution. Two weeks later, it passed the Council unanimously. It was a good start, but we knew that it was only a start.

A few weeks later, we hosted a press conference at a downtown JPMorgan Chase branch. At the press conference, we issued a simple demand: release a public statement that you will not fund the Keystone XL or we will shut down at least ten of your branches all across the City.

Two weeks passed and ― surprise, surprise ― Chase did not release a public statement. So we did what we had promised to do: In a major act of civil disobedience, we shut down 13 branches of JPMorgan Chase.

Not long after, Mazaska Talks called for a global day of action to hold the banks accountable for their role in the climate crisis and for their role in funding projects that violate Indigenous Nations and Tribes right to Free, Prior and Informed Consent. Three months later, the largest ever protest against banks’ investments in fossil fuels occurred in 60 cities, 12 countries, and 4 continents. In Seattle, we disrupted business at all 106 branches of the tar-sands-funding banks in the city and seven people were arrested as we shut down central branches of JPMorgan Chase, Wells Fargo, and Bank of America.

We knew that protesting outside (and, um, inside) Chase wasn’t going to be enough, either. And so in November 2017, we sent a letter to Chase PNW Chairwoman Phyllis Campbell requesting a meeting to discuss Chase’s role in the climate crisis. To our surprise, a few weeks later, we joined with Matt Remle and Rachel Heaton, the founders of Mazaska Talks, to meet with Phyllis Campbell, Maris Buchanan (Chase’s Vice-President of Sustainability), and Thomas Perrick (Chase’s PNW Head of Government Relations).

At that meeting, we explained why we are engaging in this campaign: Chase is funding new fossil fuel projects at a time when new fossil fuel projects mean locking in climate pollution that will cause the extinction of species and vast levels of human suffering. Matt and Rachel explained how the fossil fuel industry routinely violates Indigenous communities’ rights to Free, Prior and Informed Consent. In each instance, we provided numerous examples of Chase clients ― namely, TransCanada and Enbridge Energy ― building projects that both violate the rights of Indigenous communities and lock in climate chaos.

After the meeting, Ms. Campbell referred us to Matt Arnold, Chase’s Global Head of Sustainability. Since then, we have been in regular dialogue with Mr. Arnold and others at Chase ― and we have continued to push them hard in every one of these conversations.

And the Coalition Grows

In September 2017, Rainforest Action Network (RAN), a national organization with 30+ years’ experience with corporate campaigns, joined the campaign against Chase. Their opening salvo was an impressive banner drop, rally, and disruption at an event that Chase CEO, Jamie Dimon, was speaking at in Denver, CO.

Since then, we have worked closely with RAN, and the coalition of groups participating in the campaign has only grown: Honor the Earth, Indigenous Environmental Network, Greenpeace USA, 350.org, 350 Colorado, 350 Madison, and Chicago Rising Tide are a few of the organizations that have thrown down for the campaign in the last year. On a local level, we have planned all of our Seattle actions with our friends at Mazaska Talks, Protectors of the Salish Sea, Missing and Murdered Indigenous Women, as well as with organizers from 350 Eastside and 350 Tacoma.

As we look ahead, we know that this campaign will have to grow even more. That’s why we’re excited that organizers from 350 Mass, 350 Bay Area, and 350 Denver are all participating in the upcoming April 10th action.

And the Actions Continue

Despite the fact that Chase decision makers are now engaging with us, the campaign coalition has continued to use public protest as a key strategy. Here are just a few of the highlights:

Tar sands devastates our climate, our forests, and our water. What is less well-known is the devastating impact it has on indigenous communities — and especially on indigenous women. Over the last four decades, over 4,000 indigenous women have gone missing or been murdered in Canada. The murder rate of indigenous women is over 4x that of the general population. This violence vastly increases near the “man camps” that service tar sands extraction sightsLast year JPMorgan Chase increased its financing of the Canadian tar sands by 400% and is currently attempting to block the introduction of a shareholder resolution that would force the bank to undertake a study into its tar sands investments.This is one reason why we #ShutDownChase. Share if you agree that Chase needs to stop funding the violence of women and devastation of our planet.This action was envisioned, led and created by Protectors of the Salish Sea, Mazaska Talks, and 350 Seattle. For more on Protectors of the Salish Sea: https://www.facebook.com/ProtectorsOfTheSalishSea/

These are just a few of the actions that have happened as part of this campaign: RAN has also been following Jamie Dimon all over the country and regularly bird dogging him; 350 Madison and 350 CO have had actions we haven’t mentioned here, as have numerous other organizations. Literally dozens of these actions have been reported in media outlets like Bloomberg, The Seattle Times, Democracy Now! and many more. In addition, we’ve supplemented these on-the-ground actions with other strategies: In December 2018, Chase executives received well over 20,000 emails and 1,000 phone calls demanding that they stop funding fossil fuels; at Chase’s 2018 AGM, RAN attempted to introduce a shareholder resolution that would have forced the bank to complete a study into their tar sands holdings, a resolution that Chase executives blocked from being introduced.

Well, the short answer of that is more of the same. Last week, we just found out that Chase is now the largest funder of fossil fuels in the world. The numbers don’t lie: since the Paris Agreement was signed in late 2015, Chase has loaned over $196 billion to fossil fuel companies.

And so we will continue doing everything in our power to hold Chase accountable. We’ll engage their leadership in dialogue, we’ll send their executives tens of thousands of emails and call Jamie Dimon thousands of times, and we’ll protest at their branches all over the country.

The next opportunity to join the campaign is on April 10th. We hope that you’ll join us. Here’s how:

It’s going to take all of us to move the nation’s largest bank. We hope that includes you.