The maritime industry is powered by fossil fuels
Cargo Shipping vessels account for about 3% of global CO2 emissions per year — if shipping were a country, it would be the sixth biggest emitter in the world.

Shipping vessels and cruise ships run on some of the dirtiest fuels in the world:

LNG: Not a Climate Solution

Most liquefied natural gas (LNG) currently comes from fracking, the process of injecting water deep into the ground to break apart rock and release pockets of methane gas. Methane is 86x more potent than carbon at warming the atmosphere over a 20 year period.

LNG has been touted by industry as a “bridge fuel,” a “climate solution,” and “clean” when in reality, it’s just another dirty fossil fuel.

The International Maritime Organization (IMO) recently conducted its own study and concluded that “LNG is not a climate solution”— citing underestimated methane leakage rates, and vessels commonly not using best equipment or practices available to optimize the fuel. The study notes that “the overall life cycle analysis would show little or no carbon savings and, in many cases, worse performance compared to HFO/MGO,” and that “even if LNG’s methane leakage and slip issues were to be resolved, the widespread adoption of methane as a marine fuel would result in extensive stranded assets as shipping decarbonizes.” They conclude that “instead of engaging in a complicated and ultimately unproductive shift from one fossil fuel to another, activities under the IMO GHG Strategy should focus on delivering short-term emission reductions in the existing fleet and speeding up the development of genuine low carbon fuels and the roll out of zero emission vessels.”

Although it’s true that fracked gas is cleaner at the point of burning than most fossil fuels, when the entire life cycle is accounted for, from extraction to use, LNG is potentially worse for the climate than coal or heavy fuel oil.

Some LNG advocates point towards the “cleaner air” breathed in by crew and longshoremen due to less particulate matter than some fuels, but are the benefits holistically great enough to invest in decades long infrastructure investments & costly ship conversions instead of investing in new technologies and strategies on the horizon? Communities near extraction sites and refineries will be exposed to particulate matter, carcinogens, and toxins–we should not be bartering the health of workers against the health of communities at the other end of the pipelines–we need truly cleaner solutions than this.

While more solutions are needed to get to zero carbon maritime activity, some strategies already exist. 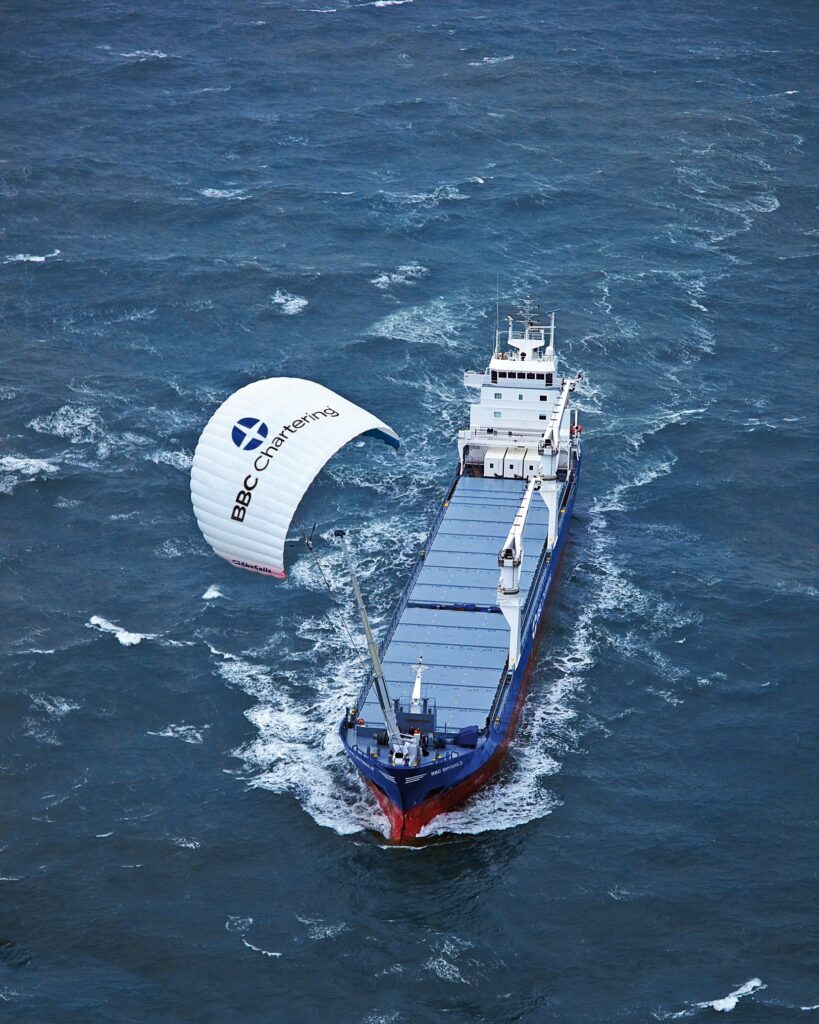 Slow Steaming (download a pdf fact sheet)
When cargo ships and cruise ships slow down (“slow steaming”), they reduce their fuel use. A 10% reduction in fleet average speed results in a 19% reduction in CO2 emissions and a decline in other pollutants. Slow steaming also protects Salish Sea marine life by reducing stressful underwater noise and lowering the risk of vessel whale strikes.

Wind Propulsion
Retrofitting existing ships with kite sails for wind-assisted propulsion can decrease fuel use by an average of 10% but in some circumstances as high as 50%.

Incorporating wind-assisted technologies, such as sails, rotors, kites and suction wings, into new ship builds could reduce ship emissions by 10-60%.

Circular & Post-Growth Economy
A 1:1 substitution of zero carbon technology for fossil fuel technology alone will not achieve the emissions reductions necessary for achieving climate stability. Strategies to decarbonize global shipping and other maritime industries also requires reworking supply chains, rethinking how and where goods are produced and consumed, building resilience into systems, and reducing demand.

There are huge gaps in regulatory oversight for maritime industries, including the non-essential cruise ship industry.

IMO carbon reduction targets are set for “efficiency” – how much cargo is emitted per ton of cargo moved – rather than for total or absolute carbon reductions. This means that seaports and maritime industries can claim that they meet their carbon reduction targets even while their total carbon emissions are on the rise. An example of this can be seen on page i of the Executive Summary of the Northwest Ports Clean Air Strategy 2018 Implementation Report.

And in November 2020, the IMO actually approved a plan to give ships a fee pass on carbon emissions until 2030, allowing HIGHER carbon emissions from global shipping over the next ten years.

For a more detailed look at the climate challenges posed by the maritime industry and how we move forward, check out this article by Christian De Beukelaer, Senior Lecturer in Cultural Policy at the University of Melbourne, and this research study on decarbonising the aviation, shipping and freight sectors.

Want to get more involved?

Join the maritime work team! We’re looking for people who are interested in:

To learn more about the Maritime Solutions team, check out our Welcome Aboard! doc.

Hold Elected Commissioners Accountable!
We hold the Port of Seattle accountable by organizing public testimony at Port Commission meetings, providing feedback on Port projects, and encouraging/supporting/demanding that the Port’s own guidelines for greenhouse gas emissions be brought into line with what’s needed to avert the worst climate outcomes. We envision a future where the Port of Seattle meets its goals through policies and initiatives that center the health, safety, and well-being of our communities, waters, and planet.