For Immediate Release: Banks and 4th Ave shut down by climate activists 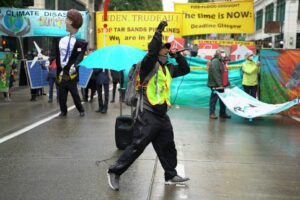 Scores of activists with 350 Seattle shut down 4th Avenue in downtown Seattle on Friday, as well as both a Chase Bank and a Bank of America on the street, to protest fossil fuel finance in the lead-up to the Glasgow climate talks, which begin November 1. Other activists delivered a letter to the Canadian Consulate (also on 4th), urging the Canadian government to abandon its building of the TransMountain (TMX) pipeline, which is moving forward despite both Indigenous opposition and studies showing that expanding tar sands development will make it impossible for the country to meet its climate goals.

Chase is the world’s largest fossil fuel funder; Bank of America is the fourth largest. Both banks are funding the controversial Line 3 pipeline, sometimes described as Minnesota’s Dakota Access Pipeline.

“Banks that support new pipeline development — especially tar sands pipelines — are directly responsible for climate catastrophes like the devastating wildfires and hurricanes we’ve seen lately. Without loans, these projects don’t exist,” says Alice Mar-Abe, who is currently disrupting business in Bank of America. “And they shouldn’t.”

Rich Voget, part of an interfaith group shutting down Chase, added “Climate change raises profound moral issues, because harm will come to people who didn’t cause the problem, and won’t have a voice in deciding how to address it. Chase and the fossil fuel industry are willing to sacrifice a stable climate for the proverbial 30 trillion pieces of silver….so we’re asking Chase to stop financing fossil fuel projects so we can avert a climate catastrophe.”

A similar action is taking place in New York City today, with dozens of activists disrupting business at the Chase, Bank of America, and Citibank headquarters. Since the fight against Wells Fargo for its funding of the Dakota Access Pipeline, the pressure on banks has been high, and Seattle has been a center of the battle, with Chase in particular being targeted. “When a bank is the largest funder of climate chaos on Earth,” points out Valerie Costa, Executive Director of 350 Seattle, “we can’t let that bank retain its social license. Given what we’ve seen lately in wildfires and hurricanes and flooding, it’s clear that building more pipelines is genocidal. So we have to take action, and put pressure on the banks, on the Canadian government, and on the climate talks themselves.”

Many of the activists are veterans of the successful Keystone XL and ShellNo fights; they say they’re confident of winning this one too, “but we’re running out of time. We can’t afford for these pipelines to run even for a little while,” says Costa.

“We the people are harnessing our power to make change even when the government has failed us. It’s legal for Chase to support catastrophic projects, so we have to call attention to the fact that that’s exactly what they’re doing.” – Abby Brockaway

“We all want to prevent the catastrophes of the climate crisis, and we know exactly how to achieve that. What we need is for governments, corporations, and big finance to stop holding us back and putting profit before people.” – Dakota Rash

“Banks pump money into oil companies, oil companies pump CO2 into the atmosphere. This is a moral injury to us all and requires a moral response.” – Bob Whitehorn