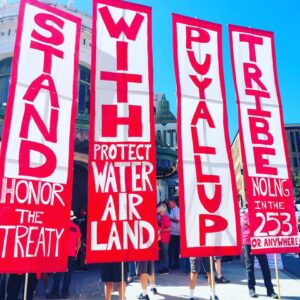 To get out of a hole, you’ve got to stop digging. To move to a sustainable world, you have to stop using fossil fuels—and above all, stop creating economic “lock-in” by building expensive new fossil fuel infrastructure.

Our Resistance teams pop up whenever a new fossil fuel infrastructure project (or expansion) is proposed nearby; sometimes teams also fight existing projects that are so egregious that there’s no sensible place for them even as we wind down fossil fuel use more generally (think: explosive trains full of fracked oil, coal plants, and pretty much anything to do with tar sands). The teams get folded down when we win, which is a lot.