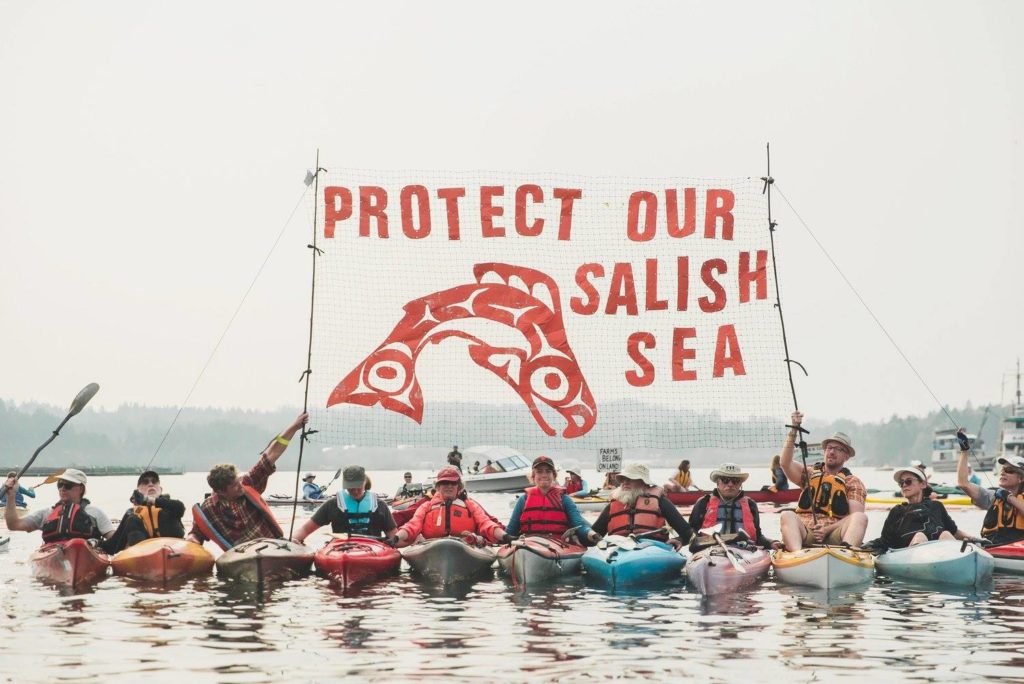 Trans Mountain is a proposed massive tar sands pipeline that would ship more than 890,000 barrels per year of highly polluting tar sands crude oil from Alberta to the coast of British Columbia. The pipeline is currently owned by the Canadian government, after a huge resistance movement forced its previous owner – Kinder Morgan – and investors to back out.

The Trans Mountain pipeline expansion is a disaster for the Pacific Northwest and the planet. The project threatens Indigenous sovereignty, endangers the Salish Sea, and locks us into irreversible climate catastrophe. If built, the Trans Mountain pipeline would result in a 700% increase in oil tanker traffic to 400 tankers every year. It would also lock in the same amount of climate-destroying pollution as 22 million new cars.

Over the past few years, powerful cross-border organizing led to powerful resistance on land and sea, raised over $600,000 to support First Nations-led lawsuits, and moved Washington leaders to come out strongly against the project. In the face of fierce opposition from Indigenous communities along the pipeline’s route and in the courts, as well as from politicians and the climate movement, the project has been delayed for years.

Right now, however, Trans Mountain is plowing ahead with construction across British Columbia, destroying local ecosystems and criminalizing Indigenous land defenders. We’re monitoring the situation closely – including an environmental review process that Trans Mountain has to redo – and supporting Indigenous land defenders that are standing strong against the project.

Here in the US, one key lever for intervention is the US insurance industry, which is a major backer of Trans Mountain. All fossil fuel projects need to secure adequate insurance coverage to move forward with construction, including this massive tar sands pipeline. We know that insurance companies are sensitive to public pressure, and some of the largest insurance companies have already backed away from Trans Mountain in response to our emails, calls, and actions.

Contact Sulakshana to learn more and get involved as we fight this zombie pipeline project.