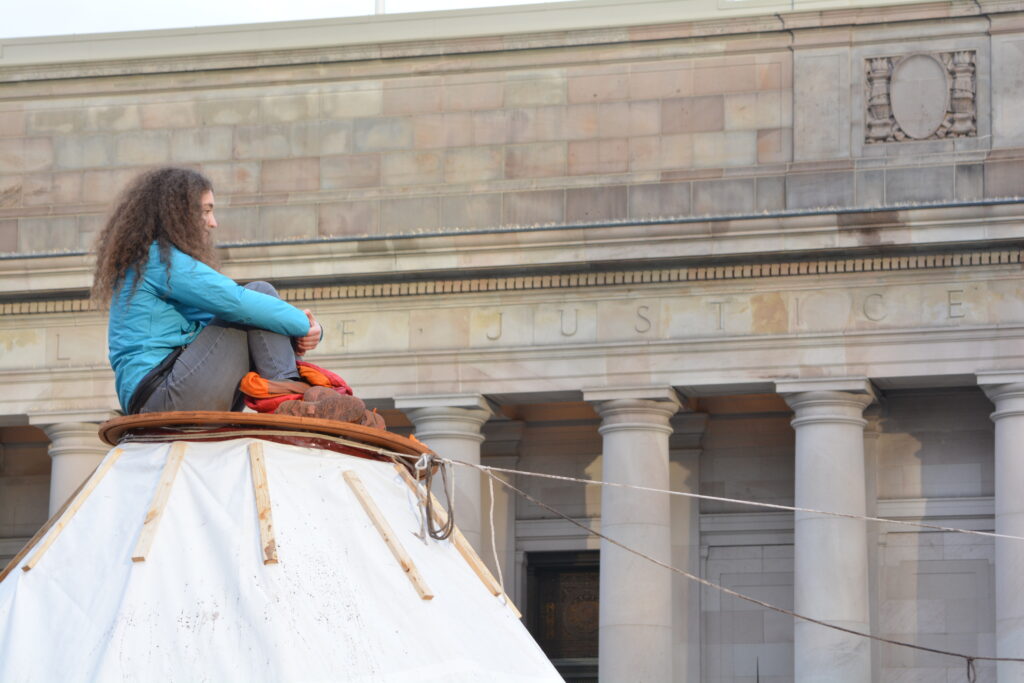 Late last year, two major new reports called for urgent action on climate change; one, from the International Panel on Climate change (the IPCC), warned that we have less than twelve years to significantly reduce CO2 emissions. Why then should we battle racial oppression and economic injustice in our fight against runaway warming?

For one thing, overcoming the political and economic power of the fossil fuel industry requires an understanding of how the industry has operated, working to keep its most obvious pollution and harms far from those with political power. Those who have benefited the least from the fossil fuel economy have also suffered the most from it. In marginalized communities facing injustices like police violence and the daily struggle to make ends meet, climate change is seldom seen as the most immediate problem, but redlining and discriminatory land use policies have meant that it’s usually poor and/or African American, Native American, and Latinx communities who live in close proximity to chemical plants, incinerators, refineries, and other polluters — and who are also the most vulnerable to severe weather and other climate risks. Amy Goodman’s tour of Houston’s Fenceline Communities after Hurricane Harvey shows the shocking extent to which marginalized communities are exposed to toxic pollution. As researchers at the University of Michigan and the University of Montana documented, “Minorities and low-income communities are seen as the path of least resistance because they have fewer resources and political clout to oppose the siting of unwanted facilities.”

This raises unsettling questions: would we still be facing anthropogenic climate change if our society valued all lives equally? Maybe the sacrifices required to make a fossil fuel economy work would not have been acceptable. Unfortunately, as slavery and religious strife show, humans have a long history of considering some lives as less worthy than others.

Slaves, of course, were denied their humanity and sold like cattle; they suffered torture designed to force ever more productivity out of them. And the land on which cotton was grown was stolen from Native Americans, who were either killed or forced to leave their homes. After slavery, segregation and violence against African Americans and Natives continued, and redlining kept neighborhoods segregated and drained resources from black communities; these neighborhoods have often also been the most polluted. And the prison industrial complex that has disproportionately entrapped Black, Latinx, and Native people has environmental as well as social consequences, including a large carbon footprint.

It’s easy to show the violence of the oppressed; during the Baltimore uprising after the murder of Freddy Gray, media reports focused on images of burning cars and smashed storefronts. But the violence of the powerful is more subtle, virulent, and widespread; it places waste incinerators close to schools and refineries next to homes, poisons community water supplies to protect the profits of bond holders, and allows global warming to destabilize Sub-Saharan Africa because maintaining an unsustainable economic system is fundamentally valued over the lives of Africans.

Policies rooted in white supremacy are designed to divide people and thereby destroy solidarity. Other policies, rooted in the logic of capitalism, may inadvertently do so, because no one wants to believe that their comfort requires someone else’s illness or death. Failing to understand the brutal logic by which the fossil fuel industry has operated—“progress” at any price, and keep the pain and suffering out of view of those with power who might be troubled by it—profoundly limits our ability to deal with global warming for many reasons, perhaps most of all because we fail to see how willing they’ve been to sacrifice people. Why would it be different now? It isn’t—to see that, we only need to look at fights like the one over the Dakota Access Pipeline, which was rerouted so that it didn’t endanger the water supply of Bismarck, and did endanger the water supply of the Standing Rock Reservation.

We also need to remember that if only solutions coming out of the white ruling class are considered, we are listening only to those with  a vested interest in preventing changes that would limit their profits and power. Scientists have warned about the threat of anthropogenic climate change for over 40 years, ample time for the implementation of market-based solutions. But because the executives of the fossil fuel industry lied to protect its profits, here we are—faced with irreversible climate chaos unless we transform our economy over the next ten years, a formidable task that will require us to come together as never before. And that requires white people to understand the profound environmental and economic inequities of the system—a system that has benefited many of us greatly—and to show up in solidarity and humility for racial and economic justice.

We cannot repeat the mistakes of the past and expect that things will turn out differently. To solve climate change, we must recognize and overcome the system that gave rise to it.