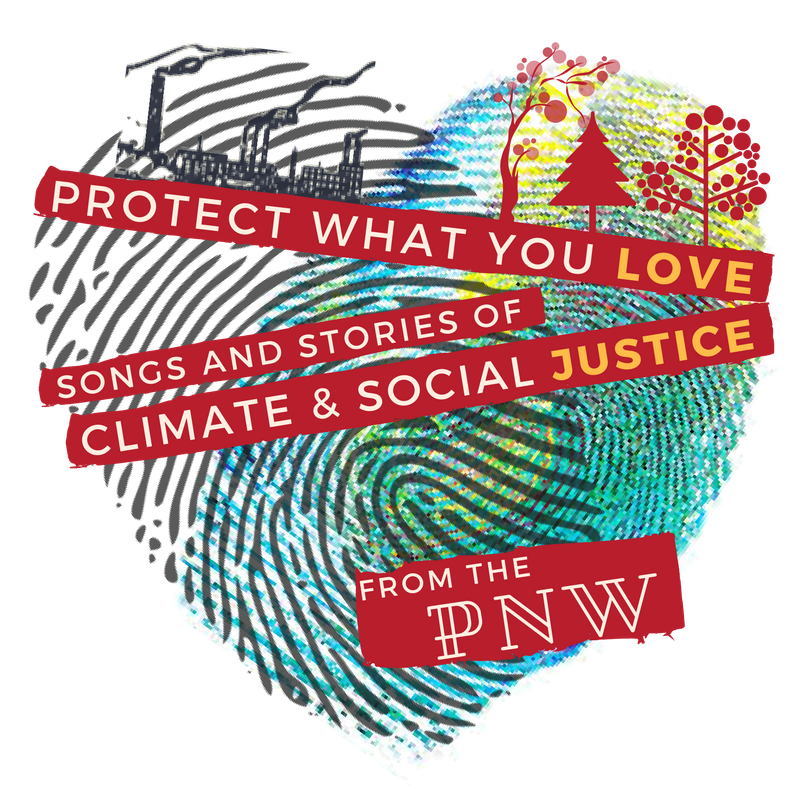 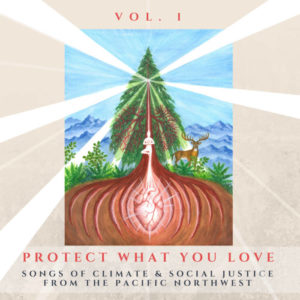 We’re delighted to announce the launch of “Protect What You Love – Vol. 1” (Songs of Climate and Social Justice from the PNW).

The album release party on August 13, was a benefit concert for Our Children’s Trust. We raised $2,600! Many thanks to those who attended the event and shared energy for our children’s future. The album is free; if you donate, all proceeds will go to 350 Seattle.

Protect What You Love has been a collaborative effort of The Musical Activism Coalition via 350 Seattle, Rolling Crone Records, and other Pacific Northwest artists and musicians engaged in climate justice. Through art and storytelling, this project seeks to plant seeds of a consciousness that engages our community more deeply in the movement towards a just and livable future. We feel blessed to have collaborated with all the amazing artists, engineers and volunteers who helped make this happen. This is our gift to the movement, and to each other.

Some of the artists in the Protect What You Love Album

Paul Cheokten Wagner, an Indigenous climate activist and professional flute player, is another contributor to the album, and has written a song called “Return of Tokitae”—a song about the Orca whale Tokitae, who was taken from the Salish Sea in 1970, and lives in the SeaQuarium in Florida. Paul is an organizer in the campaign to bring Tokitae (renamed Lolita) back to her native waters.

Annie Sea, a Portland, Oregon musician, writing about her song, “N’chi Wána”: “This song came to me on the banks of what most of us now call the Columbia River, in North Portland. I learned that another name for this river is N’chi Wána, the Big River or Great River, in the Ichishkíin Sɨ́nwit or Sahaptin language of the Yakama, Umatilla, and Walla Walla peoples (among others). It is a song honoring the river with one of its indigenous names and salmon that return to spawn.”

Aji Piper, is a youth hip hop artist and one of the youth plaintiffs in the national court case, JULIANA v. U.S. CLIMATE LAWSUIT asserting that, through the government’s affirmative actions that cause climate change, it has violated the youngest generation’s constitutional rights to life, liberty, and property, as well as failed to protect essential public trust resources. Bill McKibben and Naomi Klein have called their case the “most important lawsuit on the planet right now.”

We’d love to grow musical participation in 350 Seattle–please join us at our next general meeting, or contact Artful Activism lead: Lisa Marcus.