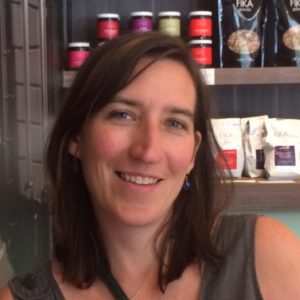 Valerie Costa joined 350 Seattle as a volunteer during the epic 2015 ShellNo fight, when hundreds of people on land and sea confronted Shell’s arctic drilling operation. She was drawn to the climate movement as someone who grew up in a city with two coal-burning power plants, which were shut down after years of grassroots activism. As a volunteer, Board Treasurer, then staff member, she helped to build 350 Seattle into the largest city-based 350 local group in the United States. 350 Seattle has become a vibrant and politically powerful organization with a 28-person leadership team and board, thousands of supporters, and a budget just shy of a million dollars. Valerie is also the President of 350 Seattle Action, our 501(c)4 sister organization.

Prior to taking on the interim Executive Director role at 350 Seattle, Valerie worked for the last decade with dozens of nonprofit organizations around the country through her consulting business, Aril Consulting, specializing in fundraising and organizational development. She and her team have supported clients to start development programs, raise significant funds, write successful grants, and develop diverse funding portfolios for long-term organizational stability. Valerie also developed a 10-part fundraising group coaching series and helped co-design a cohort-based organizational development program called Heart & Muscle for 350.org. Valerie got her start in fundraising while working at Senior Services, the largest nonprofit serving older adults in Seattle, where she held the position of Chief Development Officer.

Val has left her employment with 350 Seattle, but (we hope) finds us too irresistible to entirely leave behind. She’s a member of the Pledge team and of the 501(c)4 board, and sometimes meddles in other matters when we ask her to.