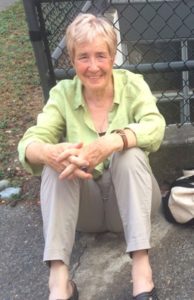 At 76, Sheryl’s one of the oldest members of 350 Seattle’s leadership. She joined the group in early 2017, feeling that she had “no choice” but to work on climate. Why? For Aislan and Claire, her two granddaughters. Sheryl doesn’t want them to have to fight in the “water wars.”

“The water wars are a symbolic way for me to think about what’s going to happen to the planet. The image I have for these girls and people alive in the next half century, it’s horrifying,” Sheryl says. “I can’t bear it.”

This life has been shaped by Sheryl’s coming of age in the early 60s and raising two kids on her own. Gender inequality was a given back then. Socially, she was shunned by some feminists who looked down upon her for having kids.These experiences shaped Sheryl’s writing, which has focused on women’s experiences all over the world. She’s supported women’s writing by co-founding Hedgebrook, a women’s writers retreat on Whidbey.

Sheryl has written all the bios on this website (except this one). She’s enjoyed the process; it’s been fascinating to “uncover the rich backgrounds that people bring to the organization, the thoughtfulness that they bring to the work.” One of the things Sheryl likes about 350 Seattle is how cooperative it is. And that it’s a learning environment. “The quality and amount of energy that arises from a ground-up organization is pretty thrilling. Watching new people come forward at general meetings, find their footing, come back again in a month, that much more accomplished, is pretty exciting.”

When asked if she’s hopeful about the future of the earth, Sheryl looks back over her lifetime and shares how much has changed. “Even though we are very barely slugging along with race issues, I also remember when I first saw a black mannequin in a store window and that was revolutionary. LGBT rights changes have been enormous.”