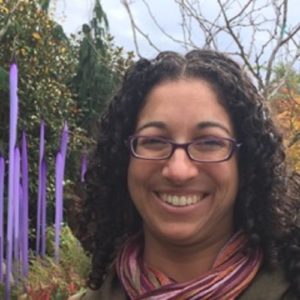 “I’d been reading about divestment and had decided to withdraw my money from Wells Fargo,” Rebecca said, referring to the moment when she realized the bank was heavily invested in the Dakota Access Pipeline (DAPL). Then she learned about the 350 campaign and concluded it was more effective to cut the tie as part of a group.

She jumped into the Defund DAPL campaign “head first.”

But this wasn’t the first time. In fact, she, a founder of a startup, had had a rush of political re-awakening when Trump was elected. She’d been an activist, primarily with reproductive rights, but her participation had lapsed because of her developing career. Then came the election, a search of local platforms for action and an encounter with Alec Connon of 350 Seattle.

The Defund DAPL campaign fit her concerns squarely: it was the intersection of fossil fuels, racial justice, human rights and indigenous sovereignty.

She spoke of the “egregious” examples of how fossil fuels are affecting marginalized communities around the world as well as here. How the city of Bismark rejected DAPL, so it was moved to indigenous land. How smaller, less advantaged communities like Kalama in Washington are being targeted for methanol plants.

So she jumped in, taking on organizing roles, helping people prepare to withdraw from Wells Fargo, and advocating divestment with Seattle City Council members. Progressives were in favor, but others were less than enthusiastic. The resolution shuttled about.

But “rallies turned out hundreds” and then allies like Injustice Boycott, Black Lives Matter and indigenous organizations began to pull together under the leadership of the Native American “water protectors”. Suddenly calls were coming in from all over the country. The resolution could have “quietly died in committee” were it not for protests. Instead it passed.

In all of this, what struck Rebecca was 350’s strong sense of community.” The membership is really involved,” she says, there are events, direct action organizing, monthly meetings, all essential to sustaining an organization of passionate, engaged people. That’s important because climate justice is going to be a “long fight.”