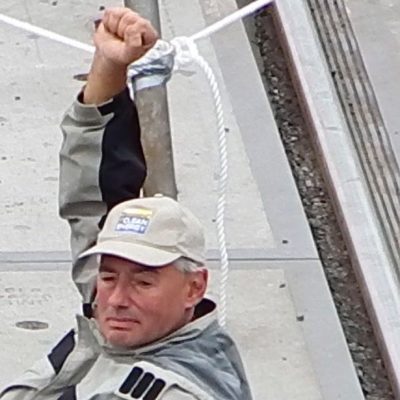 Patrick Mazza (Former President of the 350 Seattle Board of Directors)

Patrick Mazza has engaged issues of global sustainability and survival from a regional perspective since the early Northwest forest wars in the 1980s, and has devoted himself to the climate struggle since the late 1990s. Through writing and activism, Patrick has worked to encourage solutions from communities, cities, and states that build models and inspire action around the world.

Patrick was a member of the Delta 5, which conducted an oil train tripod blockade at BNSF Everett Delta Yard in 2014, and was able to argue the first climate civil disobedience necessity defense in a U.S. courtroom in 2016.  Patrick has been active with 350 Seattle since 2014, and has served as Community Solutions Workgroup Co-Facilitator and member of the Hub, predecessor to the Board, which Patrick formerly served as President.