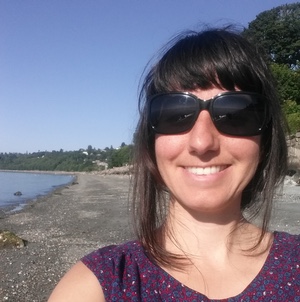 Growing up in a predominantly white suburban Texas neighborhood, Kara didn’t understand that not everybody lived in suburban comfort—not until meeting people in community college. This realization led to a desire to learn more about the world outside of the suburbs, and an awareness that there is always more to know, another side of the story.

[Note: Kara wasn’t exactly a standard suburban youth. A self-identified “weird kid,” Kara’s social group was the kids who didn’t fit the standard mold. “We were constantly mocked for how we dressed and who we were.”]

What Kara studied in college – philosophy, women’s studies and sociology – prompted a desire to look deeper into the world. “I wanted to know why there seemed to be some people with so much, and others with so little. The study of sociology really made me question how society is organized, and philosophy helped me shape my vision for what better organization would look like.“

Kara began activist work at Texas State University – San Marcos, starting a feminist club on campus. With no organizer role models, the path was challenging but rewarding, and many lessons were learned. Not seeing any pathways to paid work in organizing, Kara survived by wits and an unflinching willingness to do any kind of job available: bridal gown preservation, pizza delivery, bike shop accounting, Jimmy John’s general manager, Patient Advocate for a women’s health care collective, consultant for a clean energy company and so on – including a recent stint producing “Jenise’s Jammers” hand-made energy bars.

A few years after college, feeling uninspired by organizing opportunities in a small college town, Kara moved to Seattle. Having watched the WTO protests from afar, Seattle seemed like a place where people were willing to take action aligned with their values. While Kara’s initial entry into 350 Seattle was Break Free, Frontline Allies is the workgroup Kara facilitates, focusing on internal education and support of environmental justice-focused allies. It’s hard. “You go to climate meetings and there are a lot of white people. Policy has, historically, been made by white men, while those impacted most heavily by climate change are people of color, and people living in poverty.”

Recognizing that 350’s predominantly white membership is in itself a deterrent to many people of color, Frontline Allies is trying to address the issue. It initiated a book club; sponsored undoing racism workshops; and, along with the rest of 350 Seattle, works to deepen alliances with communities and organizations of color. “If people see us as allies who show up for their struggles, they might be more comfortable coming to our meetings.” Even so, there may be differences and tensions in the work—for example, “Understandably, people of color experience arrest situations differently from white people.”

“We’re definitely making progress. The “Undoing Racism” workshop series, facilitated by the Mangrove Collective, is helping…but it’s a constant process and it’s important to acknowledge when we mess up. It can be very uncomfortable work, but discomfort is what helps us grow.”

Kara envisions another world; one free of oppression, one in which all humans are valued. Were that to come about, Kara says, imagining another line of work, “I would live outside of a city and have chickens.”

In the meantime, “I will do everything I can to listen to and uplift marginalized voices.”