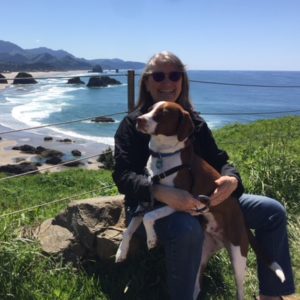 “Everything I love is under attack,” says this former “wild child.”

Not a sporty outdoors person, in the sense of being a hiker or rock climber or surfer, Kanit is “just in nature.” She looks at the trees. Wanders in the woods. Heads to the beach. When nature’s not in her backyard, as it wasn’t when she lived in San Francisco, she finds a way to reach it. She followed the nesting of peregrine falcons through binoculars; she dedicated herself to finding awe in her wandering: spotting nature, for example, in the dandelion sprouting out of a crack in a concrete parking lot and then blogging about it.

It’s “what cleanses and renews us”, she says, referencing David Suzuki’s The Sacred Balance: “We are the air. We are the water. We are the earth. We are the sun.” As a psychiatric nurse, she asks her patients, “Have you been outside in nature?” It’s a “healing partner.”

As the threat to what so deeply inspires her became more and more apparent, Kanit’s “wild child,” self has emerged. Drawing on the youthful spirit that moved her to hitchhike from Minnesota to Oregon, to ride the rails and pilot small planes over the Southwest, she showed up at the first 350 Seattle meeting in 2013 and signed on as a kayaktivist. She rowed for Break Free. She’s a regular at meetings, marches, rallies and demonstration.

In 2017, she ratcheted up for the Seattle Divest the banks action. She, Margo, and Barbara Lewy got arrested for chaining themselves outside the Wells Fargo bank in downtown Seattle. “If you’re willing to get arrested,” she says, it shows the “moral emergency.”

The action affected her in unexpected ways. She’d been feeling anxious since Trump was elected, but “when I knew I was going to be arrested, I felt this visceral calm.”

And then there was the prompt from the Ralph King documentarians reporting on the action. They came to the divest trainings, chose a group to follow, recorded through the action and in interviews asked really personal questions. “I feel like I don’t have the vocabulary but I wanted to answer in a responsible way. I started crying. Everything I love is under attack.”

She will do more; she has “no choice.” And then there’s the wild streak. “When people ask me what I’m going to do when I retire, I tell them, ‘I’m going to get arrested.’”