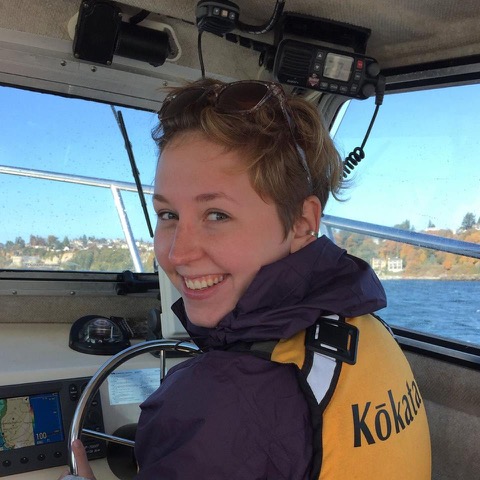 Volunteering with 350 Seattle means facing the climate crisis head-on. Even so, absorbing devastating news day after day can be exhausting. “Every day we’re bombarded by reports of ice sheets collapsing, entire species disappearing, and oil pipelines leaking,” Hillary reflects. “The grief is real. My heart aches sometimes because it’s so hard to take in.”

That empathy — for herself and others — has guided Hillary’s work with 350 Seattle.

Hillary was born in Seattle and currently resides on occupied Snohomish and Stillaguamish land. She loves all the region has to offer – forests, mountains, rivers, and the beautiful Salish Sea. While their love for nature was evident from a very young age, Hillary’s passion for protecting the environment ignited in college. Hillary studied human rights, social movements, and ecology, eventually publishing a report on Indigenous resistance in the mangroves of Ecuador. Hillary went on to work for several local non-profits and volunteered her time with the Shelton View Forest Stewardship Association and Seattle Recreative.

At 350 Seattle, Hillary jumped straight into the 2017 Chase Bank Day of Actions to stop investment in fossil fuel infrastructure. Since then, she’s helped with other direct actions, supported communications, participated in art builds, attended lobby days, and been among those who are resisting Tacoma LNG.

In the process, she’s built lasting relationships, honed new skills, and embraced the magic of their voice, which led to her interest in music as a form of resistance and healing.

“Climate justice,” Hillary says, “is about transforming our world.” If we are to interrupt inequity and climate collapse, she says, the movement demands stamina – which comes from being in community with one another, nourished by “good food, dance, laughter, storytelling, and, of course, music.”

So Hillary joined The People’s Echo, a collective song community for social and climate justice. When 350 Seattle, Got Green, and others gathered outside Mayor Durkan’s office in June 2019 to call for a Seattle Green New Deal, music, too, was there. The “Green New Day Anthem” was one of the first songs The People’s Echo ever created together. Hillary is excited to see what comes next.