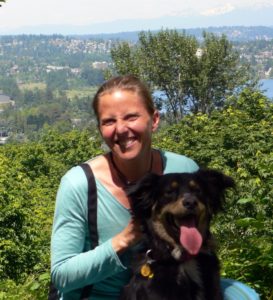 Emily Johnston is a writer, editor, builder, runner, and baker originally from Boston; she’s been in the Pacific Northwest since 1997. Before co-founding 350 Seattle in 2013, she worked primarily as an editing consultant (but also waitressed, tended bar, and built websites, sheds, tiny houses, and natural furniture). Her first book of poetry, Her Animals, was a finalist for the Washington State Book Award; it seems dubious that there will be another anytime soon, though she’s very pleased to be part of All We Can Save, and occasionally writes a blog post. She was also one of the “valve turners” who shut down the tar sands crude pipelines into the US one day in 2016. Her dog Mosey is the best person she knows, and her life has been beautifully altered by the orcas she’s met.