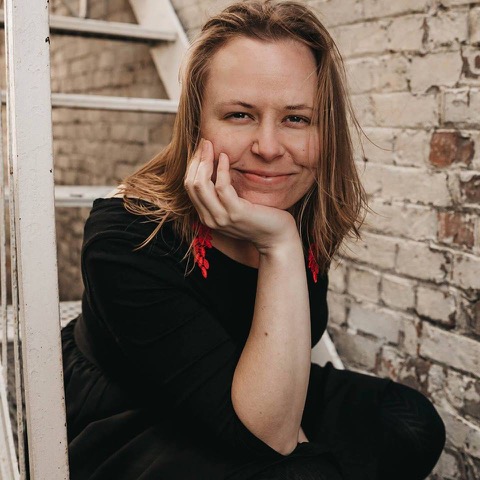 In one of her early outings as a climate volunteer, Emily introduced herself to the director/producer of the National Geographic film Paris to Pittsburg. He was “low key and humble;” she was shy. Inexplicably, she asked him if he would do a showing for 350 Seattle. He said “yes,” and she found herself “quaking in her boots” when she had to interview him at the event.

“I was aware of the environmental crisis in general,” Emily says, speaking of a time five or so years ago, “but I thought you had to be science-y to make a difference.” She even played with the idea of a career in the environmental field. Instead, she settled into a data-analysis job for Neighborcare Health, which serves communities that don’t have access to health care. That fit with her other concern – social justice.

In late 2018, Emily read the latest report from the Intergovernmental Panel on Climate Change (IPCC), describing the impact of 1.5 and 2.0 degrees Fahrenheit of planetary warming. It outlined the extinction of species, droughts, massive flooding, and climate-driven migration. A humanitarian crisis.

Washington’s carbon tax failed in 2018. She found 350 Seattle in early 2019. “I had a sense of welcome and camaraderie right away.” The message was “We have work for you to do and we trust you to do it.” She went to monthly meetings and made calls to the state legislature. Next, she was “super onboard” for the Seattle for a Green New Deal campaign.

These days, she’s working on the solidarity team, focused on immigration issues. She believes that the climate crisis and racism are deeply linked. “Consumerist culture and capitalism thrive on the concept that the planet is here for us to use.” They depend on our willingness to extract from the earth and from people. Racism allows people to ignore how climate change impacts specific groups of people (and ignore any calls to fix the problem). “It’s profit over people and planet.”

She envisions a future where everyone has access to clean air, water, fresh food, and a beautiful and healthy environment. Working in solidarity with immigrant and Black, Indigenous, and people of color (BIPOC) groups helps “bring much-needed healing,” she says. With its decentralized structure and affinity groups, 350 Seattle allows her to work on what matters to her. “It’s a place for passionate and compassionate people.”