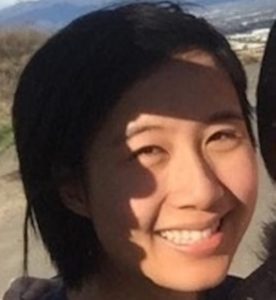 Eliza Pan, Analyst at Amazon, and co-facilitator of the Policy workgroup

Eliza Pan is probably the only one in 350 Seattle whose work was inspired by a house fire. Losing everything prompted her to ask what was important in life. Doing “something” about climate change was one answer.

Using the Cascadia Climate Action calendar, she went to events all around the city, happening on 350 just as it was preparing for Break Free. The organizing was “energizing,” the people “amazing.” She threw in her lot.

Still, like many newcomers, she wasn’t sure where she fit it, especially since she didn’t have academic or professional expertise in climate change. So, she dug in and researched what ordinary people could do to advance a cause.

What she discovered emboldened her and launched her 350 course. “The idea of civic involvement in my generation [she’s in her twenties] has dropped dramatically. [We] don’t vote as much; we aren’t as involved in civic groups.”

In a reversal of that pattern, she decided to take on 350’s Civic Action work. “Our goals are to empower anybody with the knowledge and skills they need to engage in civic action from low commitment to high,” even if they felt like they didn’t know enough or didn’t know what to do or that they wouldn’t make a difference.

To overcome the obstacles, she adopted a training method she’d learned from Val and Alec: teach the tools and let the volunteers use them as they see fit. The strategy works.

Summer Montacute went to one training and proceeded to set up climate justice education events in the 5th legislative district. Jared Howe–busy with wife, children and work–set up monthly potluck suppers.

Meanwhile, Eliza has become more knowledgeable about lobbying issues in Olympia. “The stances 350 takes on climate justice are unapologetic.” While there are many opinions on how climate change should be managed, 350’s role “is to be the voice in the room that stands on principles and draws a line in the sand… Without us, the conversation does not shift.”

Washington State, she believes, has “the potential to be a vanguard” in climate justice. The state is currently behind California and Oregon, but it shouldn’t be. Legislators tell Eliza that they hear about education and health care but not so much about climate. That can change “if we raise our voices.”