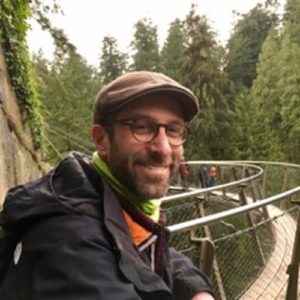 Eli  grew up in a suburb of Cleveland in a mixed-heritage household, and brings a strong personal perspective to his work in 350. Engaging in some early anti-oppression activism opened understandings of himself that had previously gone uninvestigated; these grew after 9/11, when he began speaking out against the U.S. wars in Iraq and Afghanistan–and even more as he engaged in further both political action and social justice work.

In 2014, Eli pointed himself towards climate justice work. “For the longest time I just couldn’t look at it, it was too big and I felt powerless. To me this work isn’t about polar bears or trees, even though I like those things. To me this work is about taking a concrete stand against abuses that are done in my name. I won’t be part of it. It’s not good for me, knowing what I know and not doing anything. I can’t live like that.”

“It took me about 6 months of talking about getting involved before I could actually drag myself to a meeting.” Although he didn’t know the science, history, or politics, he decided he knew enough to show up and work. At the very least, he could support the leadership of the organization. As a variety of opportunities for participation came along, he stretched himself and said “yes” where he could. After he tried dipping into  a number of different teams and projects, he settled on  (and is now coordinating) the Outreach Team.

“There are lots of barriers to people’s involvement in supporting a just transition from a fossil-fuel based economy to a renewables one. The reality is that most people aren’t even thinking about climate change, let alone acting on their convictions.”

“We all have feelings that that we don’t matter.  Those feelings are reliably incorrect.  We do matter to each other, to the community, and to the movement  — more than we can tell.”