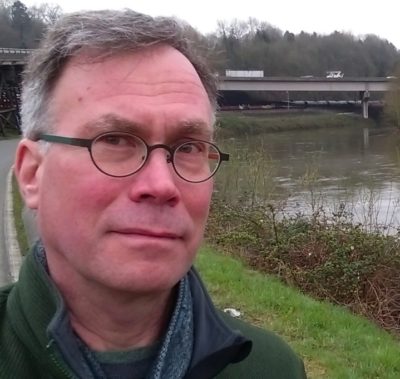 Every day on his way to and from work, Seattleite David Perk pulls off I-5 to track the number of oil trains passing through the yards in Georgetown. He notes the engine numbers and tweets them.  “There’s a lot,” he warns. “In the last 18 months, 450 sightings.”

While tracking oil trains is not a 350 Seattle campaign, they are a part of David’s progressive engagement with climate change work. It began, he suspects, during his childhood in Southern Illinois. While that might be an unlikely place for the birth of environmental awareness, his parents were involved in the early Earth Day events and his father was a disciple of Buckminster Fuller, an architect deeply intrigued with nature’s structure.

His adulthood has been a long, steady involvement in environmental issues. Prodded by his environmental concerns during the Bush administration, he moved on to political activism: He judged the Obama administration too slow and weak in responding to the Keystone pipeline and much else, and protested. He also volunteered with local environmental groups; in 2014, he did outreach around the Governor Inslee’s cap and trade plan. Next he worked inside the 43rd District’s Environmental Caucus.

Finally, he stood back, surveyed local environmental groups, assessed his free time and chose to commit his energies to 350 Seattle.

“It struck a chord with me,” he says, referring in part to 350’s community-based approach. But he also calls it a ”unique place in the local landscape.” There are other climate change groups, “smaller, more focused, and more radical;” and there are the larger ones, “more traditional, more established, and better funded.” 350 is in the middle: it’s not small, but it is “fairly anarchic, it has multiple workgroups and campaigns; it’s nimble and reactive.”

Today he writes 350 Seattle’s monthly newsletter, contributes to Community Solutions, and– time allowing–supports the work of Keep It in the Ground

And, he says, “I do spend time tracking oil trains.”