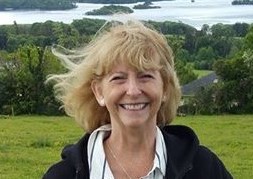 Chosen to be a “super-hugger” at the 2018 Solstice Parade in Fremont, Catherine’s assignment was to wander through the crowd and ask people if they wanted a hug and, if yes, warm them up with one. Spotting an interesting float display nearby, she couldn’t help but notice one of its participants, costumed in a bright blue wig. Thinking she needed a practice hug before hitting the sidewalks, she turned to this fellow parader and asked if she could try one out on him.

So, it was a hug that introduced her 350 Seattle. Les Berenson, a volunteer for the organization, not only accepted the hug but took the chance to educate her. Soon she found herself churning out the narrative for a 350 Seattle grant proposal.

With a long history of involvement with progressive causes and direct action, her quick attachment to 350 was easy enough. Catherine grew up in counterculture Santa Cruz just down the road from activist Angela Davis. As a Quaker (she left her mother’s Baptist church at 11 because it didn’t welcome black people) she thought protest normal and so slipped seamlessly into Joan Baez ‘s fight for California migrant workers and against the Vietnam war.

Her alignment with social justice issues – “I like to think I’ve been on the right side of history” – has guided her life as a writer, whether in public relations, radio, writing biographies, or teaching.

While teaching writing class in California’s Soledad Prison, she helped publish journals of the inmates’ work. “Some of them were quite good.” Most were proud to see their work printed up. The real seeing, however, may have been hers.  Why “a white man who had killed an officer should have the same sentence as a black man who stole from a liquor store for enough money to feed his baby” was inexplicable. “I saw firsthand that what’s happening in our criminal justice system is incredibly unjust…It was very rare that I saw a white person in my classroom.”

She made cutting pollution a part of her job in public relations in Santa Fe, New Mexico. The public didn’t want buses spewing dirty carbon on their plaza, so she dug in and found a company producing clean-running buses. It took a major PR campaign to sell the plan as well as a considerable community conversation around the color of the bus seats! But eventually the city ended up with the first natural gas fleet in the country (back when natural gas was a less controversial environmental choice).

Her faith in the power of communication to shift the public mindset around climate change is enormous. “It’s the most powerful tool we have,” and 350 Seattle understands that. “It’s been good in social media and in garnering mass media attention.” And the organization has been creative in how it delivers its message.  “The impact of seeing multiple kayaks speaks louder than words.”

It’s the work of people she likes being around; those who “care more about the condition of the world than about themselves.”