Who We Are
Who We Are
Bob Kutter, Keep It In The Ground, Leadership Team 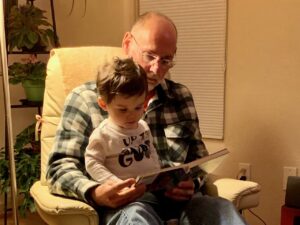 Having worked as an electrical engineer and manager in the tech industry for most of his adult life, and having raised two children, Bob and his wife moved to Washington State from California in 2015 to be nearer their son and his family. Here he continued his habit of hiking, which had started in the Green Mountains of Vermont, was kept up in the California Sierras, and is carried on today in Washington’s Coast and Cascades Ranges. Meanwhile, he read about brain neuroscience, studied Zen Buddhism, and followed the news about climate change.

Like so many, Trump’s election put him out there looking for an organization that fit him. At some point, he stopped into a 350 Seattle Keep It In The Ground (KITTG) meeting and soon found himself researching the North Seattle Upgrade project. Backed by Puget Sound Energy (PSE), this little noted project has the potential to increase Washington’s carbon emissions by three percent. The fight against it continues.

Next up was Fossil Free King County, a campaign to prohibit new major fossil fuel infrastructure such as oil storage terminals and gas pipeline expansions in the county. This meant getting voters to sign petitions, meeting with county council members, and “showing up at the right time.”

Meanwhile, 350’s tech campaigners were putting a resolution to Amazon’s board to report on what the company was doing on climate change. As a retired tech manager, Bob figured that the resolution wouldn’t pass, but that the story might make the news; the question was whether and how the techies would build on it.

“Generally speaking, the tech industry has very intelligent people in it. They know about climate change and that it’s man-made, but they’re inclined to take the ‘I can’t do anything about it’” position.

Does this discourage him? In one way, no. As a Zen practitioner, he not only knows how to let his thoughts go, he also knows he can’t see the whole picture “so I do what I can do and trust that other people will wake up and do what they can do.”

At the same time, he recalls the dramatic success of the campaign to protect the ozone layer from the damaging effects of Freon. “We reached the tipping point and there was a global agreement and movement.”

Hopefully climate change campaigns will be as effective in providing a live-able planet for Linden, his young grandson.