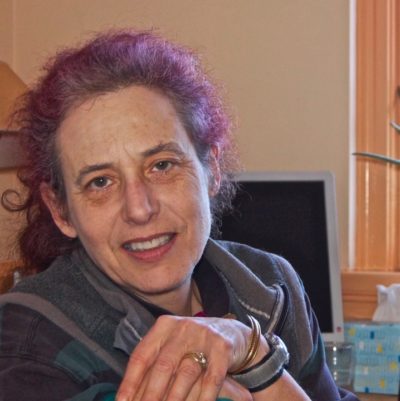 “I was in Washington DC for the Women’s March. I’d say ‘I’m in a blue state. I can call my legislators all I want but they’re already on the right side.’“

They said, “You in the blue states have to lead.”

Barbara Lewy, a retired city of Seattle financial manager who describes herself as “an older white women with a lot of privilege” signed up for 350 Seattle in late 2017. Already convinced that climate change was the most critical issue we’re facing, she’d read Naomi Klein’s book, This Changes Everything, Then, she said, “the election happened,.”

“I realized we weren’t going to have any help from the federal level and there isn’t a whole lot of time for calm approaches. It was really important to force the issue.”

She decided to throw herself into the work.

In addition to being 350’s volunteer bookkeeper, Barbara has testified in Olympia on a bill to use current science as the standard for Washington climate legislation. She stood outside her local Wells Fargo branch and talked with neighbors about closing their accounts as a way to nudge Wells Fargo into giving up its investments in the Dakota Access Pipeline (DAPL). She’s working on the signature campaign to prompt the City of Seattle to divest its retirement pensions from fossil fuels.

And when they talk about direct action, she explains, they’re very clear: “You can do it if you want to. You can choose the level of risk you want to engage in. There’s no shaming.”

And already she’s seen successes. She was at City Hall when 350 engulfed the Finance Committee meeting to demand that the city divest itself of investments in Wells Fargo. “The next morning I opened the paper and there we were on the front page.”