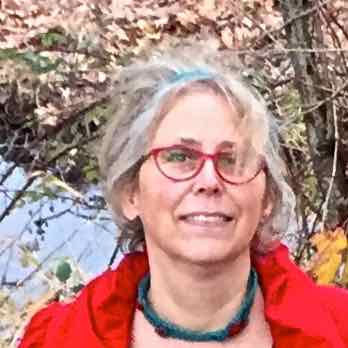 I grew up in Germany, lived in London and Paris, and as a flight attendant traveled the world. As a teenager and young adult I was concerned about global warming, then referred to as the Greenhouse Effect. As a flight attendant, I witnessed some of the inequalities that dominate our world but failed to consider doing something about it.  As a young mother I was focused on bringing up my children, with parenting taking up most of my time, inequality and global warming in the distance of my horizon.
In the early 2000’s I went back to school, completing a bachelor’s degree in biology. During that time I realized that far from being solved, global warming was on its way to becoming a catastrophe. I asked myself why such an urgent threat to humanity and life on this planet had not been addressed—and, in fact, gotten worse. As I began to take a deep dive into this issue, I came to the conclusion that an economic system that values profits over everything else is not compatible with a healthy planet. Remembering the inequalities I had witnessed, I realized that not only was capitalism bad for the planet but it was also bad for the majority of the people on this planet. It had always required sacrifices. From the miners whose lungs were sacrificed in the coal mines, to the children who lost their childhood in the factories of the 19th century, to the Africans that were kidnapped and enslaved to work in the cotton fields, many humans were denied a decent life so that a few humans could live extremely well.
Today life on earth as we know it is the sacrifice. As a volunteer with 350 Seattle I want to do my small part to help prevent the worst climate disasters. If we all do something, it will add up and overcome the power of the few vested in baking and flooding our beautiful earth.