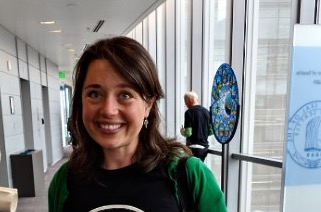 In the beginning were babies. And so, in Anna’s take on the experience, there were not only parents but families, friends and community. As doula, childbirth educator and postpartum caregiver, she reminded her clients that it does, indeed, take a community to raise a child, and so she and her colleagues arranged potluck suppers for expectant families to immerse themselves in the lives of others.

Even with community, having a baby in the age of the climate crisis is fraught. Anna, herself, with memories of a “beautiful” childhood, wonders, as she and her husband contemplate having a family, what they would be offering their children. They’ve put the decision off.

Instead, in 2018 – in the throes of eco-anxiety and grief, she began her focus on the climate crisis. First, she was a passive player—just reading 350 Seattle emails—then she attended a General Meeting. Admittedly swayed by its potluck format, she began “dabbling, around the fringes of action.” When Seattle for Green New Deal emerged, she tested the project, found it “welcoming,” and was all in. Then it was the March to the Salish Sea in support of the Lummi.

In 2019, after joining the Leadership Team, she took the co-lead on the Solidarity Team. “Our role is to support and collaborate with people on frontlines of justice,” which she believes is intimately connected to climate change. The team works in “nodes:” prison abolition, indigenous solidarity, immigration and economic justice. They are building relationships with groups external to 350, joining in mutual education, and “building the power of people seeking justice in a different way.”

For her personally, engagement has meant growth. 350’s culture emphasizes leadership development—a stream of trainings flows from its Volunteer Engagement Task Force—and risk-taking of the personal development type is encouraged. Anna has learned how to put together an action and a media plan; how to center voices of those on the front lines; how to facilitate for anti-oppression; how to build relationships and coordinate volunteers. She learned “how to identify people’s strengths and how to build on them.”

Is she hopeful, this woman who has returned to supporting pregnant people, families and communities, betting heavily on a livable world? “I think that it can be a beautiful world,” she says. She grew up in an age of individualism and an environment of extraction. It turned out to be empty and shallow. “Today we see that everything is connected. People are working together to build a better world. If we build in that spirit of collaboration, we might make it.”