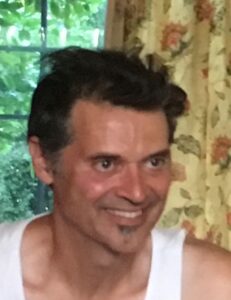 Sometime after the kids were grown, the garden had matured, and the backyard cottage was built, Andrew walked away from his job as mediator/facilitator for urban planning in Bellevue, WA and took up full-time volunteer work on the urban issues which impact the climate crisis.

“I want my kids and their friends to have a world that’s beautiful. While humans have their dark side,” he says, mentioning ecocide as a prime example, “the potential for us to do wonderful things remains.  We have created, and can create, gorgeous, thriving, sustainable cities.”

Seeing an opportunity to counteract climate damage by doing just that, Andrew established a transportation team at 350 Seattle that focused on reducing parking spaces, increasing bus and bike lanes, improving sidewalks, and expanding public transit.  They had early success at City Hall, with laws passed on reducing parking minimums, and resolutions on building out the bike master plan.  The team honed its skills at 2-minute testimony, and brought artful and moving banners to City Hall. The team also participated in the formation of the Move All Seattle Sustainably Coalition (MASS) a coalition of like-minded advocacy groups that included the Transit Riders Union, Seattle Neighborhood Greenways, and others.

Other activities ensued. Crosswalks appeared in the dead of night, a parking day exhibit created a global warming beachfront in downtown Seattle, and volunteers showed up at strategic spot to shoo cars out of bus lanes.

Now, several years later, Andrew has stepped back from the leadership of the Transportation team, happy to hand off the reins to Ingrid Elliott’s excellent leadership. He’s now circling round the concept of “15-minute cities” which is based on the idea that everyone should be able to walk 15 minutes from their home to stores, jobs, transit, and services.

Seattle, like so many US cities, was zoned into use areas: manufacturing, medical facilities, shopping, and homes in different parts of a city, making it into a car-focused place.  People have to travel from one place to the next.  Travel means pollution.  Pollution means climate change.   Instead, a 15-minute community vision would retrofit our city into one that works for bikers and walkers.

“More things,” he says, “should happen at the local to local level.”  If we changed zoning, more people could have small businesses in their home. Denser housing structures, like accessory dwelling units (ADUs) and triplexes would create more street traffic, more support for local business and fewer cars. And it’s happening.  Minnesota has done away with single family zones; Portland did it. Massachusetts and California are encouraging transit-oriented development. In Seattle, limits on ADUs are being reduced.

“I look at South Seattle” — where he’s got that garden, “and it feels like there’s tremendous potential for our communities to thrive sustainably…“