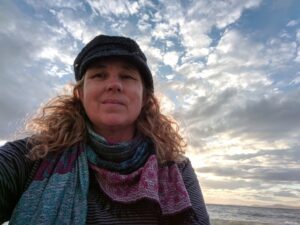 “I’m not physically brave.” Alice announces. “I’m physically a coward,” she says for emphasis, meaning non-violent direct action (NVDA) is not her thing.

350 Seattle has strong participation by seasoned NVDA activists; people who came up in the civil rights, women’s, or prison reform movements, for just a few examples.  Others have been working on environmental issues for decades. Their experience can be humbling. But the urgency of the climate crisis now attracts and needs volunteers, like Alice, without “credentials.” She, now self-identifies as “a utility outfielder” who does whatever she feels most needs doing.

Before 350 — “I always thought there were people in charge who would take care of sh__.  At some point, we would all listen to climate science.  Even the Republicans were concerned about the environment.” She worked at Microsoft and raised her kids.

In 2015, she read Naomi Klein’s This Changes Everything and it “really changed everything. It freaked me out.” A few weeks later at the first climate event she could find, she listened to Chief Rueben George with tears running down her cheeks. Ahmed Gaya, one of those seasoned activists, saw her, came over and gave her a hug.

Her first action was #ShellNo, where she helped pull kayaks out of the water. She and Microsoft parted ways and when a coalition launched Break Free, a protest locally focused on oil trains traveling to Anacortes refineries, she worked logistics.  “I’d be on Slack at 3am with the most amazing people I’d ever met, particularly 350 Seattle leaders Val and Emily.”

Over the next few years, she transported art to protests, did jail support afterward, and even ran the Keep it in the Ground workgroup for a summer. Now, committed to understanding and representing 350’s message she “tends to do whatever things I feel I can be the most useful at”.

She’s put a substantial amount of time in on the Transportation and Housing teams, working to shrink Seattle’s and Washington’s emissions. But she’s stopped worrying about what campaign to work on. “I send people information. Put together people in the community.  I’m on a fair number of calls with a lot of different organizations, making sure 350 is amplifying their important messages, and they ours. Also a lot of testifying before city council, and writing our comments on various legislation and government projects.“

These days – in the run-up to the 2020 presidential elections – she’s “scrambling” to Get Out the Vote (GOTV).

What might be called her philosophy of engagement, is simple.  “I just do whatever works.” She doesn’t agonize if she’s not the ideal person for a job — the urgency of the crisis propels her and common sense wins out: “It’s always better to have someone do it than no one do it.”

Her message for new folks: “Be patient and keep showing up.  It will take some time to find where you most comfortably fit into climate work. But we need you. We need everyone.”