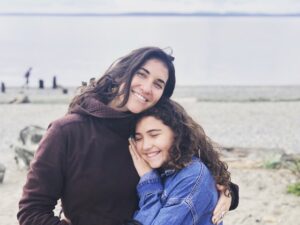 It’s definitely not a straight line from Ahlay’s stay in San Cristobal de Las Casas in Chiapas, Mexico to protest songs on 2nd Avenue in Seattle, but it was a path.

Originally from Seattle’s eastside, Ahlay fled a home with “massive adversity”, first to California, and then to the lands of the Zapatistas. There she “hung out” with the “revolutionaries, activists, and artists,” who were absorbing the spirit and practices of indigenous peoples who had claimed their dignity and, forming an alternative society, created a culture of democracy, freedom, and justice.

Ahlay began to sing.  She sang her way through Mexico and over to the Caribbean where, in 2008, she had her daughter, Femi. As she absorbed more knowledge about colonialism, racism, and incarceration, she was “drawn to music as a political action.”

In 2017, she returned to Seattle and began a search to figure out “where music fit into action.”  She played benefit concerts and ultimately made the Protect What You Love, album with Erika Lundahl and Eric Herbig. Its release was a fundraiser for Our Children’s Trust. At the same time, she took part in bank divestment actions and helped establish the Community Resilience workgroup for 350 Seattle.  Still and all, and even though she and Femi performed a song or two at General Meetings, she hadn’t really answered the question of how “music fit into action.”

“I’d studied social movements.”  They always had singing.  “Why aren’t we singing?”

“Many people say they don’t want to–maybe they connect it with churches they’ve left; most often it’s because they don’t think they have a good voice.” But people have always sung together, she says, whether they’ve had a voice or not (noting that it nourishes us neurologically) and protests are always accompanied by song.

So, like so many who lead groups in 350 Seattle, she just started up. She created The Peoples’ Echo, a core group of eight women who “catch,” learn, perform and teach songs.  Typically, the lyrics are inspiring, like “Courage is not the absence of fear,” as Nelson Mandela said. “It is the feeling of this fear – being afraid and standing up anyway”. The “songcatchers” took that one to the divestment protest on 2nd Avenue.  Like minstrels, the singers wove in and around the block-long group of activists, under their sunflower umbrellas and alongside their giant banners.  Beating a drum and repeating the refrain like a mantra, they nourished the demonstrators.

“We made a force field that was impenetrable by the police.”