If recovery is anything, it’s the first step on the path to radical self-awareness. We begin to tell the truth to ourselves for the first time in our lives, connect to our essential way of being, develop a deep self-compassion, and an appreciation of our fullest individual expression…When we free ourselves from the bonds of addiction, and claim a power we could not otherwise, and turn this power into action, we become, in name, an activist. — Holly Whitaker, Quit Like a Woman 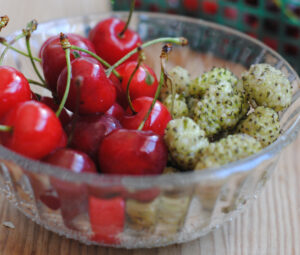 As a child, I used to lie in a hollow space below a cherry tree that was wound around a mulberry tree, their branches reaching toward the ground and surrounding me on all sides. Inside that secret place, I took my pick of the fruits in the canopy, and I thought of it as a single tree, capable of something greater than the sum of its parts. I’m not sure which tree grew first or strongest; they were inseparable, and I loved what they created together.

When I stopped drinking in early 2018, I didn’t realize that abstinence was just one piece of the recovery puzzle, and that my decision to quit would also expand my understanding of myself and my place in a broader community. I landed at 350 Seattle not long after. And my path toward sobriety and my path toward activism grew together like that cherry-mulberry tree, intertwined, part source, part scion. Sobriety has enabled and informed my activism — and the other way around. Lessons learned in one realm have offered insight into the other.

I didn’t learn these lessons all at once; both sobriety and activism grew tentative roots for years before yielding fruit. But in time, both the visible and the belowground growth changed the landscape of my life.

I can embrace grief and change.

Alcohol kept me numb and complacent. I spent years complaining about my relationship with booze without choosing to quit. Instead, I turned away from my pain. I lamented that nothing in my life was changing, but then drank instead of changing it. This dispirited-but-dormant state was also a coping mechanism for living in a world barreling toward climate catastrophe. I felt frozen in the face of it.

Quitting thawed me out, and I realized I had been smothering deep grief. Drinking hadn’t been the sole source of my anguish; it had been my way of avoiding it. Sans nightcap, my emotions flooded to the surface, powerfully, repeatedly. I was terrified — and relieved. I had bottled up so many emotions, the pain and the rage, but also the joy, excitement, curiosity, awe, passion—emotions that could crack me wide open and make me feel part of something larger.

I still struggle to look pain straight in the face with no chaser. Without alcohol, I find other ways to look away. But I learned that I could let emotion flow through and still stay afloat. And now that I had opened the floodgates and engaged with pain I’d thought long gone, I knew that even if I turned away from it, numbed it, it would continue to simmer. Healing meant accepting the pain and seeking the support of other people.

I practiced the same acceptance to engage with the injustice of the climate crisis. In one instance of this, last summer, I sat in a room with a group of 350 Seattle people, and we were prompted to imagine telling someone 200 years in the future about what it feels like to live through this time. To explore our gratitude for the beauty that remains and our grief for all that’s gone, and to explain how it feels to envision what’s ahead while having limited control over it. The heartache in the room was heavy, and our facilitator led us through it. Some cried silently; others took comfort on a friend’s shoulder. I saw that we shared in our grief, and that it was part of what was driving us to fight for change.

I can do more than I thought I could — especially in community.

Creating a different world required different choices, so I began to make them — but not in isolation. I wanted to push and be pushed by other people, and know what collective power felt like.

With my newfound time and energy, I took small steps into the 350 Seattle community, and gradually embraced responsibilities that felt akin to the ones I’d encountered in sobriety: being accountable and taking action. I met new people, learned new things, uncovered new interests. I held and was held. Eventually, I also started to host local sobriety meetups.

I felt boosted by these communities, especially after feeling so lonely in early sobriety. When my certainty about sobriety slipped, people in the sobriety community reminded me that questioning and adjusting my relationship with alcohol was just as much a measure of success as the number of days abstained. When I felt doubt about what activism could accomplish, people in the activism community showed me what’s possible by banding together to block oil trains, shut down banks, and occupy legislative spaces to demand change.

Alongside others, I could understand and accomplish more than I’d ever be able to on my own. In early 2019, I attended my first-ever County Council meeting and witnessed people give testimony about prohibiting fossil fuel infrastructure in King County. The Council passed the moratorium, a ban that was recently made permanent. I was amazed to see that change take place, right then and there, based on the demands of an organized collective. I saw how much stronger all our voices were in chorus.

For the past decade, most societal issues seemed too immense for my involvement to matter, and any potential changes seemed too small compared with what’s needed. Now, I feel the power in collective action, and I know that forming a community around pursuing change is part of the change. I can’t control every outcome, but I can control my response, and build community and resilience for living in a world that will keep turning and churning.

I can fight for individual and system change.

My personal circumstances drove me to drink. But my individual actions were interacting with a powerful system in which industry-influenced research shields us from alcohol’s impacts, and alcohol use is normalized. A system that leaves millions addicted, and one in which historically marginalized people are more impacted and have a harder time receiving help.

I couldn’t just address alcohol consumption as an individual; I needed to unlearn the story about alcohol I’d been sold, and figure out who was making bank off the message that alcohol is essential to a good life. I learned that a majority of heavy drinkers aren’t considered clinically addicted; I had been one of them, and misbelieved that addiction was a requirement for cutting back. I became far more skeptical of cultural messaging uplifting alcohol as a suitable sidekick to every emotion and event. I unraveled the idea that a drug that caused such profound disconnection could help me connect with others or make me happy. I read evidence that alcohol causes anxiety and depression in the long run, rather than relieving it, and that it kills more people each year than every other drug combined, even drugs whose overuse we call a “crisis,” such as opiates. Yet alcohol is so common in our culture that quitting is taboo, and thought of as something someone would do only if they had to.

We’re so entrenched in this system that even seeing it, much less changing it, is difficult. As with climate change, stakeholders with profit-driven motives work hard to keep people from questioning the status quo. They downplay dependence and promote a system that has profoundly damaging effects in excess — and they count on our resilience, and that of the Earth, for their business as usual. But at a certain point, that resilience starts to fracture.

When that happened in my life, in addition to unlearning the dominant narrative, I had to accept my individual history and relationship with alcohol and make different choices to rebuild my resilience. The same goes for activism; corporations are far more responsible for propping up fossil fuel dependence, so I can hold them accountable while also making meaningful changes in my own life.

Ultimately, my sobriety was a divestment. I chose to give my money, energy, and time to the world I wanted — not the one greed had built for me. 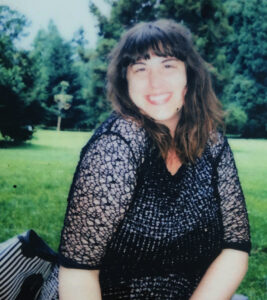 I can work toward a better future.

Just before I quit drinking, I closed my eyes and imagined myself a decade into the future: grappling with the same habits, stuck in the same rut. And something in me shifted. It was not the future I wanted, but I was barreling toward it.

Change is difficult, but we can’t afford to act the same for another decade — not on climate, not on racial injustice, not on economic inequality. People’s lives are on the line. The stability of the natural world is at stake. We’re going to have to accept and enact the right radical changes now, or we’ll be swept along by the wrong ones.

We have the ability to do this.

Change doesn’t need to be joyless or lonely. We can imagine something better, and then work toward making that vision a reality, together. And we may find that working toward a livable future gradually makes us feel more capable, more in alignment, more alive than we’ve ever felt — present for the pain, but also present for our power.