Since the summer of 2020, forest defenders have created an encampment and blockade in the south of Vancouver Island, to prevent the logging of old-growth forests in the Fairy Creek watershed, in the territory of the Pacheedaht First Nation. At over 1200 arrests, Fairy Creek has been the largest civil disobedience action in Canadian history. A hereditary decision-maker for the territory, Pacheedaht Elder Bill Jones, along with hereditary chief Victor Peter, supports the protest and has spoken against the destruction of BC’s sacred old growth, which has been more than 97% cut down. Leaders from Tsleil-Waututh Nation have also shown support for the protest. In June of 2021, the Pacheedaht and two other First Nations signed the Hišuk ma c̕awak Declaration to reassert their power over their traditional territories; the tribes formally instructed the BC government to defer old-growth logging for two years while the Nations prepare stewardship plans, but only in the Fairy Creek and the Central Walbran areas, not in the broader licensed area.

You can learn a little more about Fairy Creek and the wonders of old-growth forests here.

Paul Chiyokten Wagner is a W̱SÁNEĆ tribal member, a cultural educator, and the founder of Protectors of the Salish Sea, who have gifted and utilized 88 tarpees (Indigenous structures) internationally to stop fossil fuel expansions and return this world to an era of peace, respect, and life once again.

What motivated you to go to Fairy Creek? 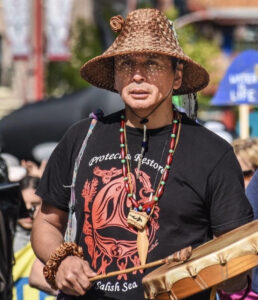 PCW: It’s in our Salish Sea boundaries, and that’s our role as Indigenous people—to have sacred relationship with every family of every being that our creator put here on our mother earth. It’s very ancient here, so it’s always puzzling when non-indigenous activists act like they’re the first to care about the environment; we’ve never even killed one of these ancient giants. I’m a W̱SÁNEĆ [Sa’anich] nation tribal member, and when the Douglas party arrived and started destroying the ancient forest, we tried to reason with them…and when that didn’t work, we painted our faces black and fought to the death. Because if they destroy the forest they destroy our ability to live as the creator intended us to live as human beings. We are completely unseparated from the trees, and we’ve always known that that’s the home of the animal people. If you disrespect that home, it’ll come home to your own family.

All of the ecosystems were 100% intact [before the settlers came], and that’s our way. If the creator didn’t show it to us, we didn’t do it. The creator never showed us annihilation or invading another people’s home and destroying it. There’s only 2.7% of the old growth left in the illegitimate province of BC–and it’s truly illegitimate, none of the tribes ceded the territory. We’re being colonized now, just like we were being colonized in 1854 in Washington. Of trees 250 years or older, less than zero point 7% remain. The BC government claims that there’s 25% left of the older trees, but recent studies showed that many of those trees are no more than 5 feet tall…they will not stop until it’s gone.

We [Coast Salish] have seen a direct correlation between the annihilation of tribes, animals, and trees: ancient forests, natural animals, and Indigenous human beings have seen more than 95% annihilation rates…that’s the trajectory of colonialism, that is the culture of death, a movement towards death. Our people have never been listened to by these governments. Yet we hold the roadmap to paradise, for tens of thousands of years we co-created paradise here. Yet they will not listen, they will not allow us to govern our own lands.

The end of humankind…it’s clear that’s where we’re heading. There’s really no other trajectory till [the colonial governments] start listening to our people, till they let go of that arrogance and darkness.

We should be in every decision-making point. Our matriarchs should be guiding these decisions. We can cultivate and be governed by true human spirit on these lands once again and heal the colonized action within us.

PCW: Fairy Creek is a pretty amazing movement, people standing up for old growth trees. It  was found on satellite imagery by non-Indigenous folks…I think it could have used Indigenous leadership, but there are amazing land defenders there, working to decolonize their actions. So many people were willing to lock into hard blocks to stop industry and the RCMP [Royal Canadian Mounted Police] from enforcing their injunction against land defenders at Fairy Creek.

It all happened because John Horgan’s all or nothing policies used against our nations, and his right-hand man is still cutting these deals with our people: “here’s what we’re willing to offer you” , with some measly nothing of a percentage, don’t take it if you want, you get zero. Basically they’re like the mob, but they’re on unceded land and have no right to be there without protocol with our hereditary chiefs. These deals often get worked out with councils and chiefs who are not from the hereditary chief line, the Indian Act placed them in there. We need to burn the Indian Act, and allow the hereditary leaders—the spiritual and intellectual leaders–to govern their lands and waters again. Other folks are manipulated by the government, and they end up destroying their own culture.

I was 4 months on the front line, mostly on the mountain, mostly in community, and the community was really amazing up there. The RCMP were extremely violent, they were targeting BIPOC and LGBTQ folks. They illegally arrested me, slammed me on the ground, hit my head on a rock, screwed up my knee. I was praying and singing on the side of the road. The non-Indigenous folks were in the middle of the road, just standing about, and RCMP lurched out and grabbed me; they didn’t get anyone else. My mom moved away from what they call British Columbia, because when she was here in Washington, a settler man opened the door for her, up in BC they didn’t even talk to her; my grandma said they act like their shit don’t stink. It’s bad here, but it’s worse up there.

The RCMP got more & more violent; it was like a shock and awe campaign. Two days after I got there, they raided the camp. It progressively got worse, and they busted through the gates of the lowest camp by the road, Headquarters camp, and came in with special forces guys. They wanted access to raid the upper camps, and they just worked their way up the mountain from camp to camp from that day on, getting more and more reckless and violent. One Indigenous woman said she was leaving, and her forearms were in crutches—6 of them tackled her.

They tried to shock and awe us away, but no one left.

The court then said the injunction [preventing protestors] is only supposed to be a few meters–not the 12 kilometers of the road. But they just kept shutting down the camps as winter came, they got so violent, it was hard to block them at all. They were felling logs on top of land defenders hiding in the clearcuts while sounding air horns–this was a brilliant tactic at first, and it really worked, but eventually the RCMP would just turn their backs and let the logs fall on top of them. The land defenders had to get out before someone got killed.

[When they did arrest people], they’d assault you, kidnap you, then dump you in the nearest town, Lake Cowichan, and they say they’re not going to press charges— because they know they have nothing. And they have no badges, no name tags…they could have been skinheads in RCMP uniforms for all I know.

How can people support the struggle at Fairy Creek?

PCW: People should show up! Whale Tail and Raven are there, doing protocol. People can just show up and do the protocol when you get there.

You don’t need to get arrested, and the odds of getting arrested if you don’t want to are extremely low. You can be on the front line, and just hold back a couple layers, and you’ll be fine.

But Canada…they’re real buttheads, so if you do get arrested, you won’t be able to cross the border again.

PCW: I believe Indigenous leadership is really important, and organizations need to decolonize themselves and be in deep relationship with First Peoples—not tokenizing, but getting behind them and showing up. We are still the #1 threat to colonial governments, we protect 80% of the world’s biodiversity and 30% of the world’s forested lands, yet we make up only 12% of the population. We hold the understandings of the land.

Our world is in deep trouble right now, it’s obvious, and our Coast Salish Slahal prophecies speak of a time long ago when all the relationships were well, but as time went on, seeds of disrespect were planted and a darkness covered the land here. A long time ago our people were gifted this sacred game—slahal—that ended all war and disrespect, and we made our sacred promises to hold sacred relation with all families of all beings that the creator put here on these lands. These sacred promises were the only thing that brought this world back from total destruction in those times—the promises, and the sacred feminine; women are the ones who move us towards life and respect. To have men governing us is insane, is madness. Our people held these sacred promises, and would still be in paradise if colonialism hadn’t destroyed our ability to govern our lands with these sacred promises.

Our knowing is that we have a choice–to continue to plant these seeds of disrespect which lead to total destruction in these prophecies or make a sacred promise to hold sacred relationship with all beings, leading to a world of paradise. It is our choice.

Want to help save PNW forests here in Washington? Sign the Pledge of Resistance, and be on the list for our forest-defense-focused Agents of Change in summer 2022!