We Need a Public Bank

Fifteen months after the Seattle City Council voted unanimously to cease banking with Wells Fargo, it has renewed a three-year contract with the climate-wrecking bank. This is why we need a public bank.

It’s awful that Seattle will be banking with Wells Fargo for another three years — it’s deeply immoral to give public money to an institution that funds pipelines and private prisons, fraudulently opens millions of accounts, and targets people of color and immigrants for discriminatory lending practices. And yet here we are: the Seattle Council just approved the renewal of a three-year contract and an additional $9 billion cycling through Wells Fargo over the next few years. The Council did this because no other bank bid for the City’s business. Wall Street banks likely feared being held accountable by the people of Seattle, and smaller banks don’t meet the minimum legal requirements to host such a large account. And so the City’s existing contract automatically rolled over and we are stuck with three more years of Wells Fargo. But there is a real silver lining here: this debacle makes the case for a public bank clearer than ever before.

Before we dive into why we need a Seattle Public Bank, let’s remember what’s happened so far:

Against this backdrop, the news emerges that the City has been forced to continue business with Wells Fargo. It comes as a kick in the stomach: at a time when we are fighting to show Wall Street that fossil fuel investments will cost them as well as the planet, this is a reminder of how beholden we are to our Wall Street overlords — a reminder that no matter how many pipelines and prisons they finance, we can’t do without them. They are the businesses that will always be bailed out; they are the bullies that are too big to fall.

Public banks are essential if we want our cities to have a real alternative to Wall Street greed; here in Seattle, credit unions are prohibited from bidding on the City’s business, and no existing community banks are big enough to take it on.

There are other practical reasons why we need a public bank: this year the state of WA will pay almost $1 billion in interest to Wall Street banks; Seattle likely pays millions each year to Wells Fargo. Re-capturing some of that would create major savings that could help us fund things like education, housing and transit. As a recent public bank study, commissioned by the City of Santa Fe, concluded, a public bank would “provide enhanced fiscal management, improved net interest rate margins, and a more robust local lending climate.” In other words, done right, a public bank would save City money, create jobs and provide affordable loans to small businesses. This is exactly what has happened in North Dakota, which has had a public bank since 1919 — last year, the Bank of North Dakota made $130 million for the state — and during the Great Recession of ‘08, North Dakota was one of the least impacted states, as the state-owned bank shielded many of its residents from the devastating fallout from Wall Street greed that caused almost ten million Americans lose their homes. (However, it’s important to note that the Bank of North Dakota also highlights some of the dangers of a public bank.)

All of this points to the heart of why we really need a public bank: A public bank fundamentally rejects the neoliberal order. 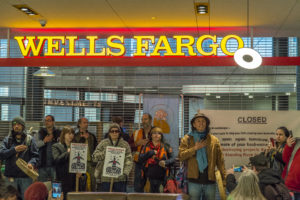 As Naomi Klein has documented so clearly in This Changes Everything, the doctrine of neoliberalism — followed by the majority of the world’s governments with a religious zeal for the last four decades — is perhaps the single greatest obstacle to achieving the sort of bold, immediate climate action that physics demands; free market fundamentalism and serious climate action are simply antithetical.

And this is the single most important reason to support a City of Seattle public bank: Few things could be more heretical to the doctrine of neoliberalism than a local government forming its own bank in order to serve the public good.

Restoring the commons is exactly what our planet and the future of our species requires, and a public bank is both a powerful tool in both that restoration, and the narrative that will help further it.