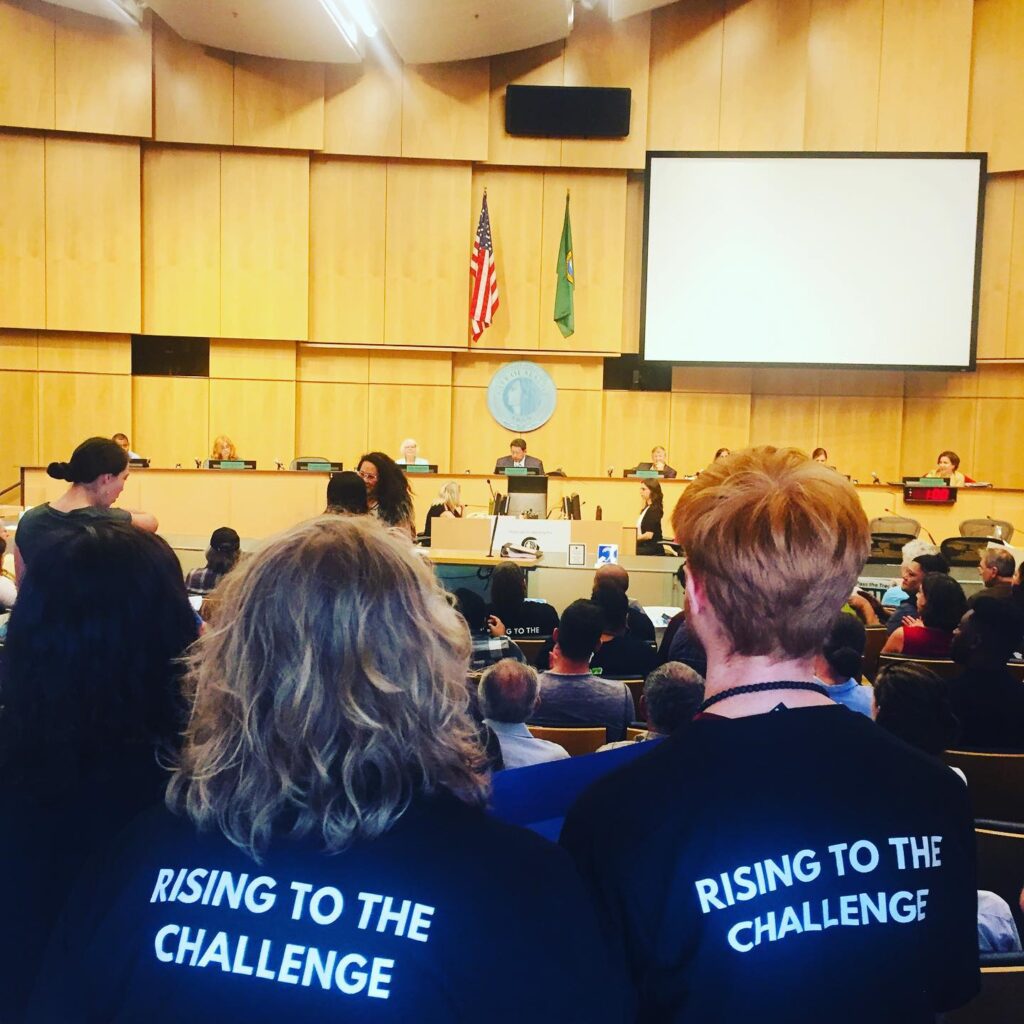 Seattle should follow the City of Berkeley’s lead and ensure that all new buildings are heated by clean energy, rather than climate-wrecking, health-damaging fossil fuels

As Seattleites brace for yet another smoke season, it is more important than ever to take meaningful steps to eliminate our city’s climate pollution. Worryingly, our greenhouse gas emissions are currently going in the wrong direction – the latest data shows a 2.5% increase between 2014 and 2016.

More hopefully, on Monday, the Seattle City Council unanimously passed a resolution, committing to create a transformational Green New Deal for our city, which will eliminate climate pollution by 2030, address current and historical injustices and create thousands of jobs in the process. The City Council should immediately follow up that resolution by passing binding policies that will ensure we are not making the problem any worse.

Luckily, other cities around the country have shown us the way, and have created policy blueprints that we can follow. One city, Berkeley, recently passed a policy that will ensure all new buildings are heated by clean electricity, rather than health-damaging, fossil fuels such as fracked gas. Seattle should follow Berkeley’s lead and pass policies that ensure that all new buildings in our city are clean, safe and fossil fuel-free.

Climate pollution from our residential and commercial buildings is the second-largest source of greenhouse gas emissions in our city, largely because of the use of fracked gas to heat our homes and cook our meals. And while the gas industry (which includes the multinational fossil fuel utility Puget Sound Energy currently trying to buy influence in our local politics) would have you believe that so-called “natural” gas is a bridge fuel to a brighter future, that’s a lie. As of 2015, energy-related emissions in the U.S. from gas have surpassed emissions from coal. It’s also becoming increasingly clear that any modest benefit gas was thought to have over coal is wiped out by leaking methane, which is a far more potent greenhouse gas than carbon dioxide over the short term. In addition to leaking from extraction sites, a recent article in Scientific American indicated that U.S. cities are emitting far more methane into the atmosphere from leaky pipes than was previously realized. It is simply untenable for Seattle to continue allowing more fracked gas in our buildings and homes.

And the evils of fracked gas don’t stop with climate destruction; there are also major health and safety concerns with its use. Recent studies have shown that the use of fracked gas in homes, particularly for stoves, creates indoor pollution levels that are hazardous to respiratory health. When we use gas for cooking, we are breathing in levels of pollution that the EPA would consider illegal outdoors. Gas in homes has been linked to increasing asthma, which is already a major health issue in our city, particularly in Seattle’s low-income communities and communities of color, where people currently bear the brunt of polluted air due to a history of racist land use policies.

In addition to threatening our health, gas in our homes threatens us with death by explosion. Gas pipelines connected to our homes explode and endanger communities. Seattleites will not soon forget the 2016 natural gas explosion in Greenwood that leveled two buildings and damaged many others. While this explosion thankfully did not kill anyone, who’s to say the next one won’t? Gas pipelines explode with alarming frequency. The last deadly gas pipeline in the explosion in the U.S at the time of writing? Ten days ago. In Seattle earthquakes are an ever-present risk, and should “the Big One” hit, we can be fairly certain that gas pipelines will explode.

The good news is we can choose a different future. Replacing dangerous, health-damaging fracked gas in our buildings with clean, renewable electricity is not only a win for the climate and our health, it can also lead to increased comfort and more energy efficiency. For example, heat pumps present a superior alternative to fracked gas furnaces, either as ducted or ductless units. Heat pumps are devices that run on electricity and produce heating in the winter and cooling in the summer, doing both jobs very efficiently.  As extreme heat becomes more common, air conditioning will become increasingly important. As the Seattle Times recently reported, climate change-driven heat waves could soon be killing hundreds of Seattleites. In light of this, investing in heat pumps, which provide air conditioning where gas furnaces do not, becomes a matter of climate resiliency, as well as climate mitigation.

More good news is that the other two main uses of fracked gas in our buildings – water heating and cooking – have ready replacements that again perform better, run on electricity, and use far less energy. Heat pumps can also be used for water heating, and they look just like standard electric or gas water heaters. But compared to a standard electric water heater, a heat pump water heater uses approximately ⅓ the energy. And unlike a gas water heater, it produces no pollution. Not only that, it is a device ready for a future smart grid powered by renewables. In effect, future in-home electric devices like water heaters and electric vehicles will act as grid batteries, pushing and pulling electricity to and from the grid, smoothing out the variability issue with intermittent solar and wind energy.

Replacing gas stoves can be done with high performance induction stoves, which use magnetic waves to heat pots and pans with great precision – even greater than natural gas stoves. Better cooking, lower utility bills, healthier, safer homes and a livable planet for future generations. What’s not to like?

With these solutions in place, there is no excuse for our city to continue to hook new buildings up to climate-wrecking fracked gas. Doing so is only digging the climate hole even deeper, and everyone knows the first rule to getting out of a hole is to stop digging.