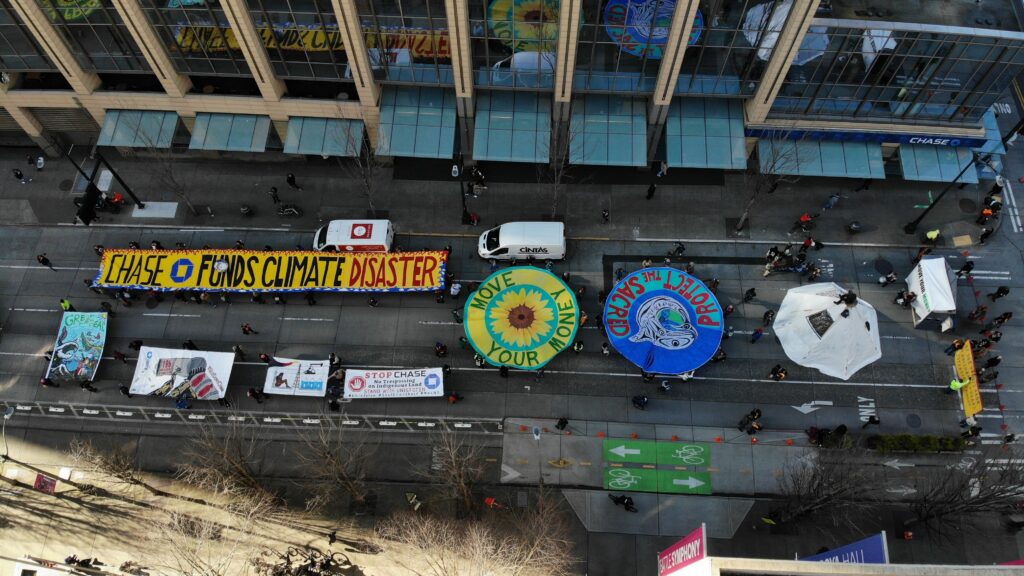 At its annual investor conference today, JPMorgan Chase released a new fossil fuel policy. It should be met with indignation, not praise.

Last week, we learned that a report from economists at the world’s largest funder of fossil fuels, JPMorgan Chase, had found that the climate crisis is now so severe that “human life as we know it is threatened.” The report, written last month, concluded with an unambiguous warning for the company, and for all of us: “Something will have to change (…) if the human race is going to survive.”

And today something did change at JPMorgan Chase. At its annual Investor Day conference  ― a closed-door, invite-only gathering of the 1% and their friends ― JPMorgan Chase released a new fossil fuel policy and, for the first time, implicitly admitted what its own economists have been warning behind closed doors: the climate crisis must change the way that JPMorgan Chase does business.

After 3 years of relentless campaigning, the world’s largest funder of fossil fuels has finally blinked. 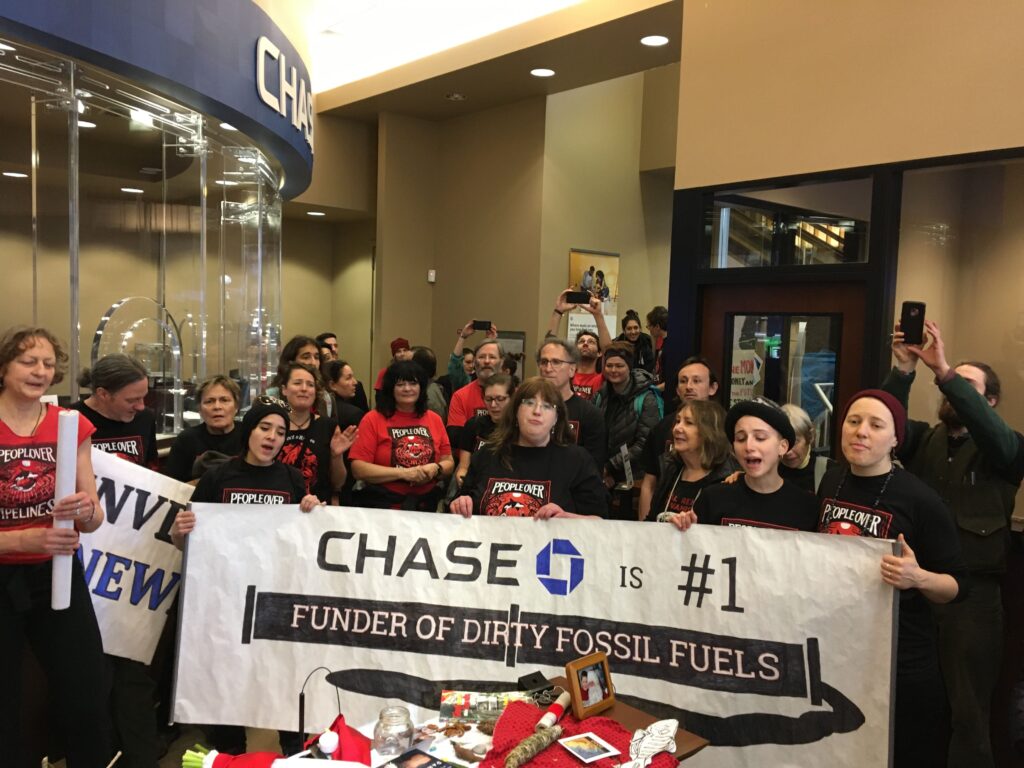 Chase’s new policy addresses three main areas: coal, Arctic drilling, and investments in projects the bank deems sustainable. The most meaningful part of the policy is around coal: It commits Chase to immediately excluding any new business ― whether providing loans or underwriting debt ― with companies that derive more than half of their business from coal mining, and to zeroing out all business with such companies by 2024. In addition, Chase has said it will not provide any new direct funding for coal plants.

Chase’s policy also commits the bank to not directly financing any Arctic oil and gas projects, and to providing $200 billion in loans to projects that meet the UN’s sustainable development goals by the end of 2020.

Unfortunately it isn’t quite as good as it sounds.

While not directly funding coal plants and Arctic oil and gas projects may sound great, it amounts to little more than greenwashing. The new policy doesn’t do anything to prohibit Chase from financing companies that are building coal plants or Arctic oil and gas projects. It’s a little like Chase has stopped directly loaning to a gun manufacturing plant, but is still loaning money to Smith and Wesson. Under Chase’s new policy, a company can no longer apply to Chase for a loan specifically for building an Arctic drilling rig, but it can apply for a general purpose loan and then use that to build an Arctic drilling rig. It’s a loophole the size of Texas.

It is an especially egregious loophole given that Chase is the world’s largest funder of companies that drill in the Arctic, providing them with more in loans ($1.7 billion) than the next five largest Wall Street banks combined since the Paris Agreement was signed in late 2015.

Then there’s the not small fact that if you are a company that derives 49% of its business from coal mining (and, say, 51% of your business from tar sands) Chase is still happy to provide you with suitcases of cash to do your dirty work.

Worst of all however, is the fact that Chase’s policy doesn’t do anything about the massive amounts of funding it provides every other type of fossil fuel company outside of the coal industry: the tar sands companies, the deepwater drilling companies, the fracking companies. It’s as if our house is on fire and Chase has promised to stop pouring (some) gasoline on the flames while continuing to pour on the kerosene and the lighter fluid. 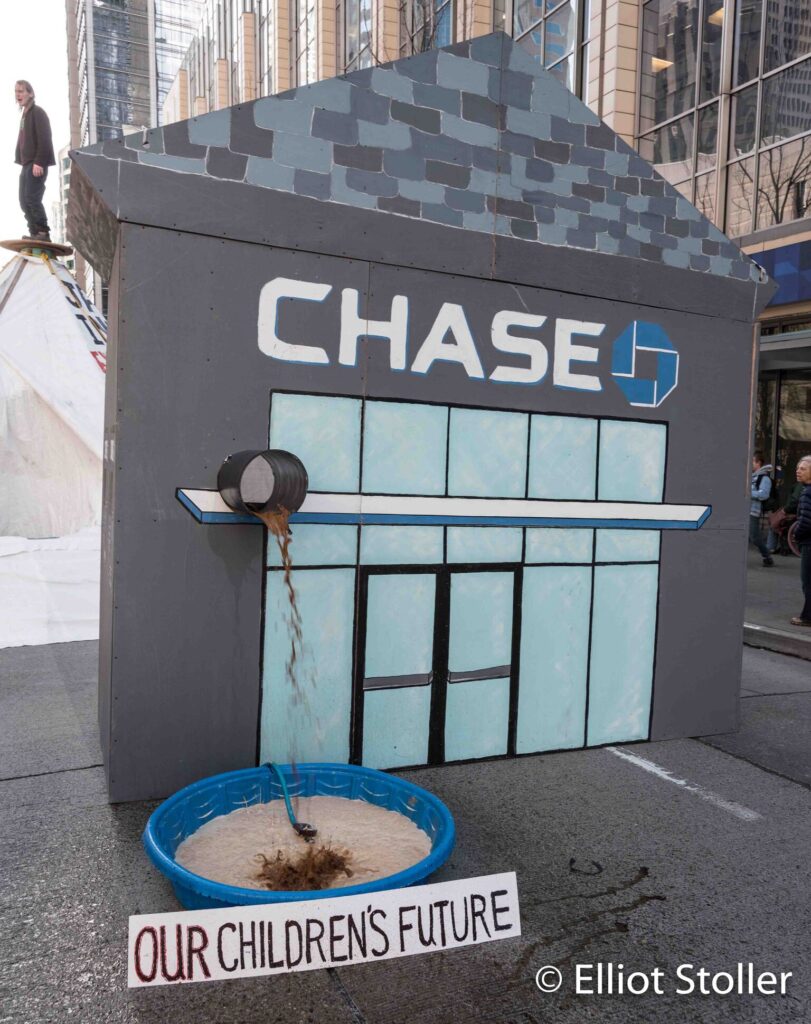 Two weeks ago, we saw what a major bank policy on fossil fuels should look like. The Royal Bank of Scotland, the fourth largest bank in the UK, released a new policy that stated the bank would stop doing business with all coal, oil, and gas companies that do not have a “transition plan” to align their business model with the Paris Agreement goals by 2021. The fourth-largest bank in the UK has essentially said that unless fossil fuel companies stop being fossil fuel companies, they will stop doing business with them. By comparison, Chase’s new policy amounts to little more than meaningless hand-waving.

All told, Chase’s new fossil fuel policy will impact little more than 0.6% of Chase’s overall funding to the fossil fuel industry. Let’s be clear: That doesn’t deserve praise. That deserves outrage. This is not a win. And we should not call it one. Indeed, perhaps the only really good thing to come out of Chase’s new policy is that it proves that the world’s largest funder of fossil fuels is feeling some heat. 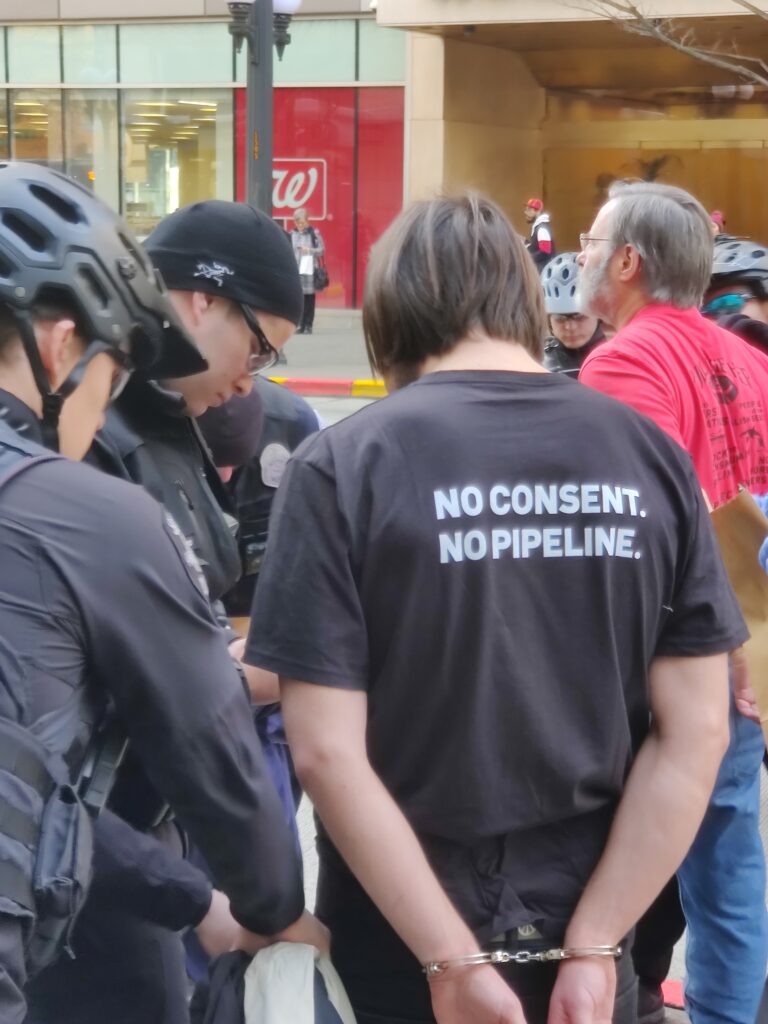 The only reason Chase has come out with any sort of new fossil fuel policy is because it has come under unprecedented pressure to do so. From New York to San Francisco, Madison to Yakima, LA to Denver, protests at Chase branches are popping off all over the country. Greta Thunberg and other youth have begun to direct their rage at those financial industries upholding the fossil fuel industry. The Stop The Money Pipeline campaign is gearing up to disrupt business at Chase branches all across the country. Media outlets from Rolling Stone to the Financial Times are reporting on the climate movement’s work to hold Wall Street accountable for its role in the climate crisis.

Chase’s new fossil fuel policy may fall drastically short, but it has proven that, with enough pressure, the world’s largest funder of fossil fuels will blink.

Now it’s time to make it actually do something meaningful.

Let’s Flatten this Curve, Too