At 350 Seattle, we often use the term “intersectionality.” By that we mean that issues of climate are closely intertwined with issues of race, equality, poverty, worker rights, and immigrant rights, to name a few. The idea is that we can’t fully solve one issue without addressing the others.

When I came to 350 Seattle and began focusing on the relationship between trade and climate in the proposed Trans-Pacific Partnership (TPP), I noticed that trade agreements themselves are intersectional; they involve not just climate, but also worker rights, immigrant rights, food sovereignty, and, of course, the abuse of corporate power. For example, as to issues of immigration, it’s no coincidence that in the case of the 1994 North American Free Trade Agreement (NAFTA), the flood of corn by US agribusiness into Mexico led to a massive loss of Mexican jobs, and a corresponding flood of traffic across our southern border.

Admittedly, though, in the TPP it was the climate-killing ISDS (Investor-State Dispute Settlement) that initially drew me in. ISDS is a corporate power grab that allows corporations to sue governments before a panel of three corporate lawyers, to demand unlimited compensation from taxpayers if the company’s executives think a law or government action violates the trade agreement. Over the last 20 years, several trade agreements, including NAFTA, have allowed corporations to challenge a myriad of environmental and climate related laws, including a ban on a toxic fuel additive in Canada, a court order to pay for pollution in Ecuador’s rainforest, and a government order to clean up a toxic metal smelting operation in Peru. Even now, a pending ISDS case under NAFTA involves a challenge to a fracking moratorium in Quebec. 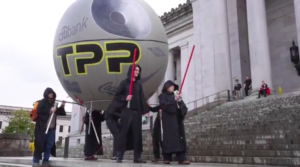 But because the TPP threatened not just our climate, but jobs, wages, our food supply, endangered species, and the rights of indigenous groups —- at 350 we were able to work with a wide array of activists to stop this deal. Our great friend in this battle was the Washington Fair Trade Coalition, of which we are a member. Members of this coalition include several labor unions, the Washington State Labor Council, Backbone Campaign, El Comité, and the Sierra Club, to name a few. Leveraging the power of this cross-section of organizations, we convinced the Seattle City Council to pass a resolution opposing the TPP. Similarly, due to our compelling street theater, presentations, office visits, and protests, Congressional representatives Adam Smith and Denny Heck eventually publicly announced their opposition to the TPP. By the time the 2016 election came around, the TPP was on life support.[1]

Now the fight begins anew as Trump works to re-negotiate NAFTA.[2] And as we move into this new battle, the intersectionality of trade, climate and immigration once again becomes glaringly apparent. While NAFTA’s ISDS still threatens our climate, weak labor standards and other pro-corporate policies in NAFTA have allowed large, fossil fuel-consuming agribusinesses to consolidate power across all three countries, often at the expense of family farmers and Mexican workers. In fact, the NAFTA-enabled flood of cheap corn into Mexico contributed to a 66 percent drop in the price that Mexico’s corn farmers received, helping to drive one million farmers out of corn production. In fact, Mexico lost over 900,000 farming jobs in the first decade of NAFTA, according to data from the United States Department of Agriculture. And ironically, although it was the pro-corporate US policies within NAFTA that forced these agricultural workers to lose their jobs and travel to the US, they now find themselves and their children, unwelcome here.

Now that I’ve become fully cognizant of the ways that trade agreements negatively affect all of us, I’m excited to delve into the work of creating a new trade policy, based not on corporate rights, but rather on the needs of workers, immigrants, and the planet.

[1]Some ask us, isn’t it Trump who stopped the TPP? No! Because of exhaustive work by activists like us around the country, the TPP was in a death spiral by the time Donald Trump came into office. His action in pulling out of the deal was only the final nail in its coffin.

[2] Although Trump campaigned in opposition to NAFTA, it appears that most of his negotiating objectives mirror the terms of the TPP.

The Storms of our….