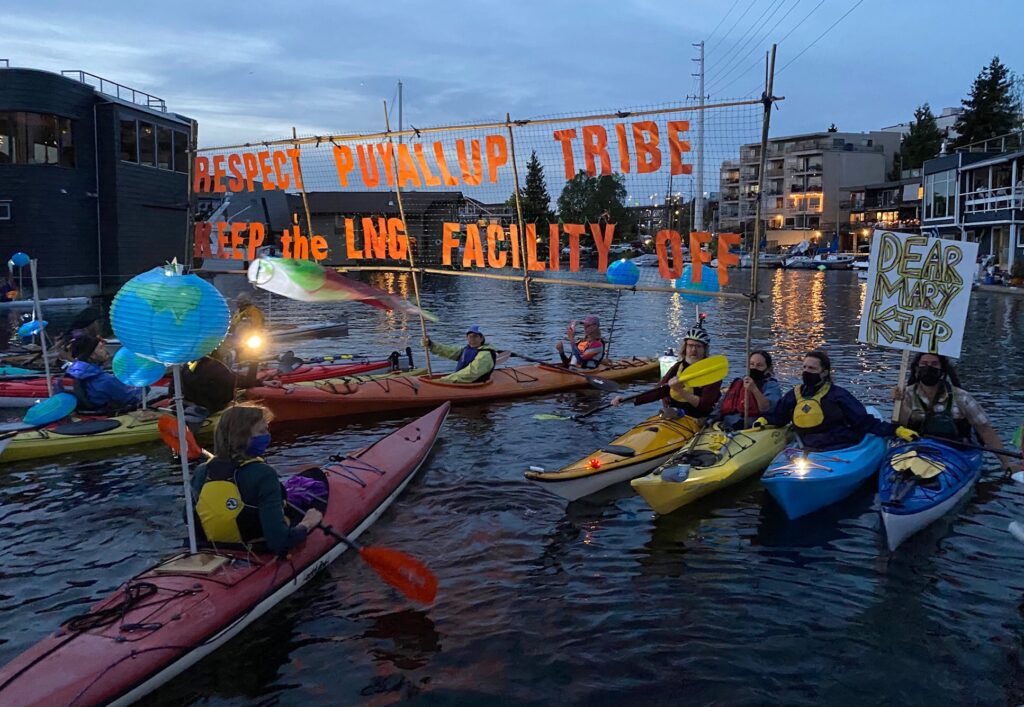 The vigil included globe and salmon lanterns, native flute music by Paul Chiyokten Wagner, and prayers that Mary Kipp will help PSE off the path of environmental racism pervasive so far in the Tacoma LNG permitting process. When the flute music began, neighbors came out of their homes to experience the peaceful atmosphere as kayaktivists circled the canoe, lighted salmon dancing in the air. After a prayer, gifts were placed on Kipp’s dock along with a letter “We recognize that the illegal construction took place before your time with PSE, but today you sit in a place of power, able to correct some of the injustice. PSE can and should amend their request to the UTC to turn on the facility, and allow time for the Tribe to receive a ruling in the legal challenge.”

Dakota Case, on behalf of the Water Warriors said:

“The Puyallup Tribe is currently fighting Puget Sound Energy in court while our inherent rights are in great danger if this facility is allowed to be operational. We have to figure out ways to clean up and restore the water around the bay, suffering from a great number of Superfund sites already. We have asked numerous times that PSE stop construction and put more thought into the repercussions of this facility being so close to civilization, and a seventeen mile radius of pollution.”

“Puget Sound Energy‘s LNG facility located on Puyallup’s estuary is unequivocally environmental racism. If put into operation it would deliver cultural genocide by exasperating the effects of climate disaster and pollution on Puyallup’s estuary where wild Salmon are already struggling to survive. In a world were our Climate Systems are collapsing causing extreme glacial melt which kill wild salmon in warmed and shallowed waters. We must stop PSE’s LNG facility from going into operation, we can not lock our region into a fossil fuel facility that current science knows to be as dirty as coal. What you do to the water… you do to yourself and your own children.”

Legal arguments that may invalidate the Tacoma LNG facility’s permit from the Puget Sound Clean Air Agency just wrapped up earlier this week, with a decision expected sometime over the next three months. The Puyallup Tribe and Earthjustice, joined in an amicus brief by AG Bob Ferguson, cite climate, health, and safety concerns in their appeal. The Puyallup Tribe has been steadfast in its opposition to the facility and was not meaningfully consulted by any of the permitting agencies.

PSE recently sent a letter to the Utilities and Transportation Commission asking permission to officially begin operating the facility around May 1st, despite the company’s knowledge that the Puyallup Tribe is awaiting the court verdict. The only reason the facility is already constructed is the company’s more than two years of unpermitted construction. A letter from Earthjustice to the UTC lays out reasons the facility is not needed before the end of summer; in brief, the facility’s only customer, TOTE Maritime, is delaying the conversion of ships to LNG, and peak shaving for residential customers might occur only on the coldest winter days, so there is no rationale for disregarding the sovereign Puyallup nation.

In 2019, the Tacoma Human Rights Commission urged additional health and safety analysis –saying that “operation of the LNG facility would potentially expose the South Sound community to grave environmental risks and potentially subject Tribal members and NWDC detainees, in particular, to a disparate environmental impact in violation of their human rights”–but this injunction was ignored. Formal “stop work” requests by the Tribal Council in 2017, sent in response to PSE beginning construction before receiving its permits, (permits that may yet be sent back to the drawing board by the Pollution Control Hearings Board this summer) were also ignored by permitting agencies.