In your heart, you know we’re right 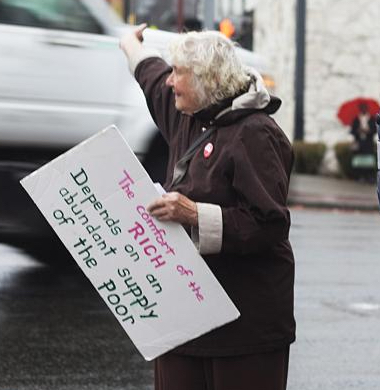 Imogene Williams died on May 24—at least, that’s what they tell me. I have a hard time believing it, and I half-expect to see her any day.

I became aware of Imogene as the older woman who was often at City Council meetings, giving testimony that was relentless in its exasperated fairness. She seemed consistently cheerful, too —mischievous, even. It was hard not to be drawn to the warmth of her kindness and sense of insult at injustice.

During ShellNo, Seattle’s epic battle against Arctic drilling, I got to know her a little. I remember one day when a few of the Seattle Raging Grannies were offered a ride on the Greenpeace boat, and one of them looked askance at Imogene climbing on, whispering to another. Imogene was 84 at the time, but she wasn’t a Granny; she was an interloper. Katie (the captain) and I exchanged looks and shook our heads. We knew exactly whose side we were on.

No one was more consistent in her attention to the depredations of the world—she was at nearly every Council meeting, nearly every march, rally, or protest. Arrested for blocking an oil train in Vancouver, Washington, in 2017, she looked disappointed in the police officer who handcuffed her. “In your heart, you know we’re right,” she said gently. The cop, who couldn’t have been more than 30, looked distinctly uncomfortable. Two years later, when Seattle police didn’t arrest her with her affinity group while shutting down a branch of Chase Bank, she indignantly climbed into the back of the patrol car anyway.

I loved her, and I knew her a little, but what I didn’t know then was that questioning the status quo ran in Imogene’s blood; her grandfather became a socialist late in life (after being a banker), and her mother was a pacifist. Imogene was born in Manila, and was sent to California to live with relatives when World War II began. Despite hiding in the Filipino jungle, her parents were caught by the Japanese and sent to an internment camp for two and a half years. After the war, the family moved to Seattle, and Alice, Imogene’s mother, became an activist. Upset by the dedication of so much taxpayer money to the war machine, she unsuccessfully ran for Senate. When Japan had to pay indemnity money to former internees, Alice brought hers to Hiroshima, apologized, and gave it to the council for a community center where people could wash dishes and take care of other immediate needs in their devastated city.

Such passion clearly left its mark. “What would my mother say if I never got arrested?” Imogene once asked.

After Imogene graduated from the UW with a degree in microbiology, she married right away, to another young scientist she met in a lab. They had four children within five years. When the family moved to Winnipeg in 1971, Imogene taught third grade, and started a breakfast program long before the importance of such programs was broadly understood. “Hungry children can’t learn,” she said simply. Her own children grown, she immersed herself in the New Democratic Party (NDP) and the Anglican church, and worked to support refugee families.

Thirty years later, she returned to Seattle. She threw herself into First Baptist, and then into Puget Sound Advocates for Retirement Action (PSARA), focusing on its climate caucus. She eventually found her way to Kshama Sawant’s campaign, as well as 350 Seattle. The climate crisis rose higher and higher in her priorities as she felt its urgency. “I think that her care for humanity and for our beautiful planet was first and foremost for her, right to the final hour,” her daughter Rebecca said.

“It got so she didn’t want to tell me what she was doing or if she was going to risk arrest, because she knew I’d worry. ‘It’s now or never,’ she’d say. She was prepared to do whatever it took, and people like that can be difficult. She felt so strongly … it was hard sometimes, being her daughter. Even the month before she died, during COVID, she wanted to pick up garbage on the way home.”

Even more often than I saw Imogene at City Council, I ran into her on the bus— which she took everywhere. Most often, she took it to see her friend Martin Gouterman. Martin had been her son’s UW chemistry professor (as well as a gay activist in the 1960s), and she met him again in an elder fitness class about fifteen years ago. They became close. Once Martin went into a retirement home, she visited him every day to help him walk; she did so the day before he died, in February.

It was on the bus that I last saw Imogene a month or two before the pandemic hit. Her grandson and his wife and baby had moved in with her a few years before, and she seemed, as always, both worried about the world and deeply engaged, with a capacity for joy and humor that matched her anxiety.

She was 88, and it’s likely her pancreatic cancer was well advanced by then. But you’d never have known it from looking at her—nor did she herself know it. I only knew that it was, as always, heartening to see her; she made the city feel warmly populated. In mid-May, she had a fall one night, then twice more later in the week. She was gone a week after that.

I keep expecting to see her—on the street in Capitol Hill, on the bus. There’s something about seeing someone regularly but not often that makes it hard to metabolize their permanent absence.

It always seemed a little like Imogene forgot to grow old, unruly white hair notwithstanding. I told her at one point that I wanted to be like her when I grew up, and I still do. She never stopped expecting the best from people, so she never gave up on trying to get it. When I used her comment to the Vancouver police officer in an article I wrote, my friend Katie had it made into an embroidery piece for me. It’s by my door, and I look at it often. It embodies both the stubbornness of her moral center and the gentleness with which she conveyed it.

In our hearts, most of us do know she was right: about the urgency of climate change, about the almost boundless unfairness of the world as it’s currently ordered. Imogene knew very well that she could do something about it, so she did, over and over again. It was that simple. 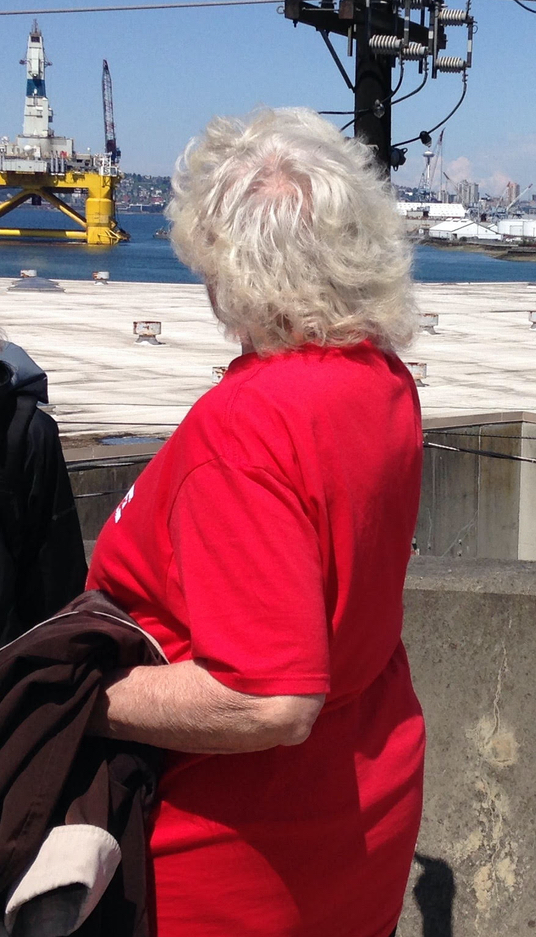 Imogene giving the Shell rig the welcome it deserves (see the shadow at bottom right….)