Six years ago, I lived in rural Vermont — a good 150+ miles from the ocean. When the weather forecast said to prepare for Hurricane Irene, I ran out and bought a bottle of wine (in case the power went out!) and thought little of it. How bad could a hurricane be in Vermont?

I knew something was wrong when I could smell the ocean. And every step I took on “dry” ground made crickets jump out of the way. As the river waters rose rapidly, overtaking the nearby hay field and destroying all the bridges into the town, I started to get nervous. I’d never seen waters rise so fast. 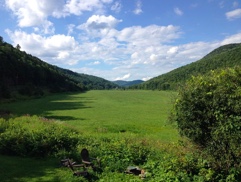 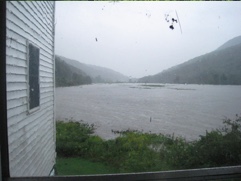 We were among the lucky ones. Many people in the valley lost their homes and businesses. Our place was just high enough and far enough from the river to be spared.

I’ve never looked at rivers the same way since.

Little did I know that on that same day in 2011, some of the people I now hold dearest in my life were in Washington, DC risking arrest outside the White House. 350.org put out a call for people to gather and protest the Keystone XL pipeline, resulting in the largest climate-related civil disobedience in the United States at the time. These early founders of 350 Seattle responded to the call, not know what would come of it, but knowing they had to do more than work within the current system.

I’m glad this early act of civil disobedience informed the culture of 350 Seattle.

Fast forward to 2017. As  Harvey wreaks its slow and steady havoc on Texas, I’m watching like so many, hoping it doesn’t get worse but fearful it will. Irene dropped 11” of rain on Vermont — parts of Houston expect over 50”.  I deeply believe in the resilience of people, especially when disaster strikes. Acts of heroism abound; people take care of each other; and communities self-organize without “professionals” to direct them (check out what Occupy Sandy did after that Hurricane hit–and some of those same people are talking to folks on the front lines in Houston right now). We are mighty when we unite.

Yes, we can and should do all we can to help with relief efforts. Donate. Volunteer. Learn crisis response skills.

But that doesn’t feel like enough. With the climate changing, and some people losing everything, (including their lives), what is an appropriate response? 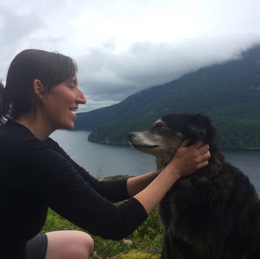 This is what we grapple with as climate organizers. The clock is ticking, and disasters underline  the need for a rapid shift to 100% renewables. Yet we’re playing whack-a-mole trying to stop new fossil fuel development, while Trump and friends roll back environmental protections, social services, civil liberties, and any semblance of a free society we’re living in. Our corporate overlords are taking over and our dystopian future is becoming a reality (1984 and Idiocracy are a little too real right now).

I’m feel like I’m stuck in two worlds and two selves right now. The “head” – practical me, needing to survive in Seattle, with all my programming to be successful and stable, managing the operations of a legal 501c3 (uh, 350 Seattle!). Then there’s the “heart”– realistic me, filled with a deep sense that if I live a “normal” life, I haven’t used my privilege, that if I do what’s comfortable and predictable, I’m complicit. I’ve seen the waters rise. I’ve witnessed suffering firsthand. I do what I can to organize and resist and it still doesn’t feel like it’s enough. I’m filled with yearning.

We can’t overcome the most powerful forces in the world by playing their game.

Instead of a New Year’s resolution, I pick one word to reflect on throughout the year. In 2016 it was “resolve.” This year it’s “heart.” Strong, warm, steady heart.

I hold these words close when I think about what it will take for me (and you) to resist the fossil fuel empire. To do seemingly unreasonable things out of love and care for each other, and for everything living. 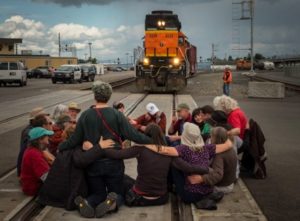 For me, an appropriate response now necessitates following my heart (essentially everything I was cautioned against growing up!). This isn’t comfortable or easy. For some of us, this looks like civil disobedience,  risking arrest and even physical harm. Going to jail. How else can I embody this yearning to stop the harm in some real, direct way?

Yet getting arrested isn’t the goal. The goal is to collectively change the way we live, and render the current system of oppression–built on extraction and sacrificing people’s lives for the sake of profits–obsolete. That’s where the heart comes in. Living from the heart is nothing new; look to the strong care work (held mostly by women) that makes sure we’re supported physically, emotionally, and spiritually. The community of resistance at 350 Seattle is filled with people following their hearts — they are the dearest people I know: resisting by questioning, listening, championing climate action all the time, caring for kids or aging parents. The risk-takers, and the countless others who have their backs.

The waters will continue to rise, even if the world takes a turn for the better tomorrow. I know that for sure.

What I don’t know is if anything we are doing will be enough. If the acts of disobedience will ripple out far enough, fast enough, to inspire enough people to refuse to comply. I am not driven by the hope this will happen, but by the journey itself. My life is so much richer as a result.