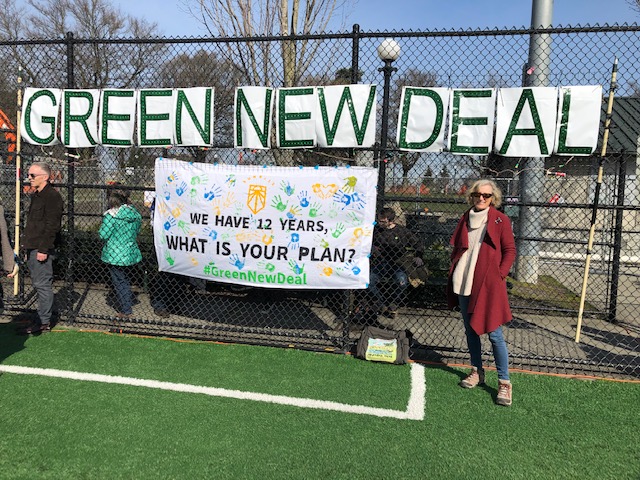 The 2022 mid-term election results — specifically the Democrats’ loss of the House majority — mean that our lobbying efforts in Congress will be significantly different than they were during the first two years of the Biden administration. Luckily for all of us, our work, and the work of thousands across the country — including groups like Sunrise and the Indigenous Environmental Network —  led to a partial victory in the Inflation Reduction Act (IRA). Unfortunately, the law includes giveaways to the fossil fuel industry and in significant provisions ignores the rights of frontline and indigenous communities. At the same time, the law does include $369 billion in funding to tackle climate change and may put us on a path to 40% emissions reduction by 2030.

To move forward in 2023 and beyond, and to address the failings of the IRA, we will focus our efforts on the following work:

1. Pushing Biden to take strong executive action on climate.
The President holds unused powers to make dramatic shifts in the use and production of fossil fuels in this country. Along with the coalition People v. Fossil Fuels, we will be asking the President to 1) declare a climate emergency, 2) ban fossil fuel leasing, and 3) stop the Federal approval of all new fossil fuel projects and exports. As part of the work to push the President on these issues, we will urge our local Congressional representatives to do the same.

2. Advocating with Congressional offices for stronger climate provisions in the Farm Bill.
Regardless of which party holds power in Congress, a Farm Bill must pass the Congress every 5 years. This offers us the chance to lobby our Congressional representatives regarding the connection between climate and agriculture. The industrial agri-food system contributes close to one third of all greenhouse gas emissions, yet has long been omitted from discussions on climate policy.  But there is now a growing recognition that agriculture, when conducted in a regenerative, ecologically sustainable manner, can actually become a climate solution instead of a major driver of climate change.

3. Asking the Biden Administration to include a Climate Peace Clause in current and future trade agreements.
Historically, international trade deals, hammered out primarily with corporate interests in mind, have included a plethora of provisions that interfere with our ability to address the climate crisis. For example, NAFTA, now known as the USMCA, allows corporate challenges of environmental policies in trade tribunals. Similarly, World Trade Organization (WTO) rules allow countries to challenge climate policies that create a preference for local production. For example, the US sued India at the WTO over the domestic content requirements in India’s massive solar program, which aims to ease chronic energy shortages in Asia’s third-largest economy. More currently, a proposed trade deal with Kenya indicates that the fossil fuel industry hopes to use trade agreements to save the plastics industry. A Climate Peace Clause included in trade agreements may be at least a partial solution, and we’ll be advocating for one in the coming year. Learn more on the Trade and Climate page.