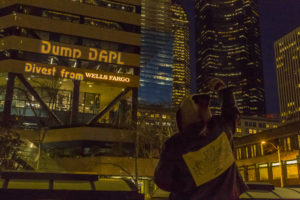 Earlier this year, a broad coalition of Indigenous-led groups teamed up with 122 First Nations and tribes to launch Mazaska Talks: a campaign calling on organizations, governments, and individuals to remove their business from the 64 banks most guilty of funding the climate crisis.

The movement against the Dakota Access pipeline highlighted the financial sector’s role in the climate crisis — and its appalling lack of respect for Indigenous Peoples’ rights — as never before: individuals closed $81 million worth of accounts, cities removed over $4.3 billion worth of business, and huge protests erupted at banks throughout the country from New York to Los Angeles.

Despite the construction of the DAPL now being completed — although a federal judge may still stop the flow of oil — the movement against the banks has continued: Seattle City Council followed up their dumping of Wells Fargo by voting unanimously to avoid banking with any financial institution that provides loans to Keystone XL.

On May 8th 2017, a coalition of Native Americans and 350 Seattle activists used nonviolent civil disobedience to shut down thirteen branches of JPMorgan Chase across the City of Seattle, calling on the bank to stop funding new tar sands projects, such as the Keystone XL and Trans-Mountain.

Then, on May 9th — not coincidentally, the day after our action in Seattle — Native-led organizations, including Honor the Earth, Indigenous Environmental Network and Camp of the Sacred Stones, teamed up with the 122 First Nations and tribes who are part of the Treaty Alliance Against Tar Sands Expansion to launch Mazaska Talks: a campaign calling on organizations, governments and individuals to remove their business from the 64 banks that are funding new tar sands pipelines and the Dakota Access pipeline. 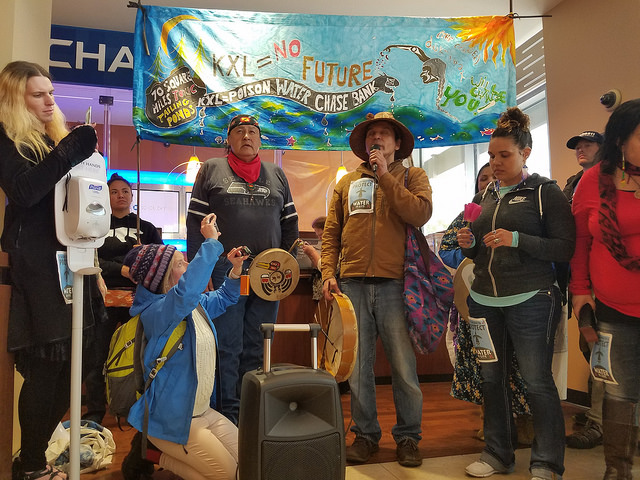 Standing in solidarity with the Indigenous coalition, 350 Seattle calls on Pacific Northwest to join us in boycotting the banks highlighted by Mazaska Talks.

Mazaska Talks is focused on the banks financing new tar sands projects for a number of reasons: tar sands are one of the most environmentally destructive forms of energy on Earth, resulting in huge amounts of deforestation, loss of wildlife, water pollution, and toxic oil spills; it is the most carbon-intensive form of fuel on Earth, dirtier even than coal; studies show that expansion of tar sands is incompatible with internationally agreed climate targets aimed at curtailing catastrophic climate change; and tar sands are the form of energy that most systematically abuses the rights of Indigenous Peoples.

This is also why some of the biggest infrastructure fights on the horizon are going to be against new tar sands pipelines: The Keystone XL would cut through the land of the Rosebud Sioux in South Dakota, which has prompted their president, Cyril Scott to proclaim that, “Authorizing the Keystone XL is an act of war against our people.” Meanwhile, 21,000 people have signed a pledge to the Union of BC Indian Chief’s that they will do “whatever it takes” to ensure that Kinder Morgan’s Trans-Mountain pipeline is stopped.

With the role of the financial sector in the climate crisis coming under unprecedented scrutiny, the time is now for people and organizations of conscience to to collectively deliver a message the banks cannot ignore.  As Rachel Heaton, member of the Muckleshoot and founder of Mazaska Talks has said, “You cannot support these banks and support your Native communities.” 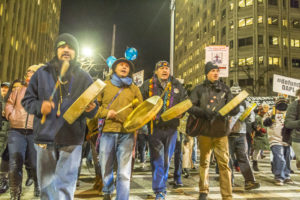 Of course, funding of tar sands is just one reason to boycott the Wall Street banks: They also drove the economy off a cliff in 2008, resulting in up to ten million people losing their homes; they systematically target immigrants and people of color through discriminatory lending practices; they finance private prisons; they charge exorbitant overdraft fees that disproportionately impact low-income communities; and they have carried out thousands of wrongful foreclosures.

With all that said, the banks and their oligarchs may seem so powerful that even the multi-billion-dollar accounts of cities like Seattle are just loose change. And yet… in recent years we have seen the runaway momentum that divestment campaigns can gather. Since its inception in 2011, the fossil fuel divestment movement has seen over $5.44 trillion worth of investment capital commit to no longer funding the fossil fuel industry. The vast majority of that capital has come from institutions with a social or moral mission — universities, faith communities, philanthropic foundations.

What if we were to see an equally powerful divestment movement focusing on the banks? What if organizations representing trillions of dollars started to boycott the banks most guilty of enabling the climate crisis?

With Trump’s all-out attacks on climate progress, such an evolution of the divestment movement makes sense. At a time when we know that burning all the oil, gas and coal fields already in production would blow us past the Paris Agreement’s’ hard limit of 2°C, the world’s largest banks have provided $290 billion to finance new fossil fuel projects over the last three years; including $87 billion in 2016, the year after the Paris Agreement was signed by 195 nations. To curtail catastrophic climate change, it is essential that the financial sector brings its business practices into alignment with a 1.5° world.

Projects like KXL and Trans Mountain rely on large loans for their construction — the Dakota Access pipeline, for example, was a $3.8 billion pipeline, $2.5 billion of which came from bank loans. Without these loans, it becomes difficult for fossil fuel corporations to find the billions required to build new infrastructure projects. In other words: if you stop the flow of dollars, you keep the oil in the ground.

In addition to helping directly stop loans, our pressure can make fossil fuel projects much riskier and help stop them indirectly. Banks will likely respond to the increased reputational damage of investing in new fossil fuel projects by cranking up interest rates, which in itself may be enough to stop projects. To put it simply: the more the costs of new fossil fuel projects increase, the less likely they are to be built. As even HSBC Bank points out, this is particularly true of capital-intensive forms of fossil fuel, such as tar sands and Arctic drilling, which are dependent upon an oil price of between $80-$100 a barrel in order to be profitable. (Global oil prices haven’t been much above $55 a barrel for over two years.)

Making such investments in fossil fuel projects financially and reputationally risky for banks, through the combination of disruptive protests and well-organized boycotts, is one of the best ways that activists can seek to increase the cost of fossil fuel projects, since the banks will charge higher rates of interest on riskier loans. 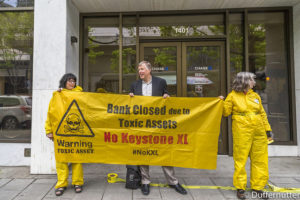 Another reason why targeting the banks makes sense: fossil fuels make up a relatively small percentage of their overall business. On average fossil fuels only represent only between 1% to 4% of the big banks’ assets. It is clear there will be a time when investing in fossil fuels — this relatively small part of their business — will no longer be worth the reputational damage that such investments cause. As citizens of conscience, it is our duty to force that shift as quickly as we can–and it may arrive sooner than we think: US Bank recently became the first bank in the United States to announce that it would no longer be investing directly in new oil and gas pipelines. (US Bank continues to provide billions of dollars in lines of credit to companies building tar sands pipelines, making this a partial victory at best–but this announcement still sets a precedent upon which the bank divestment movement can build.)

Loaning to big projects, of course, is normal business practice for big banks. But there comes a time when what was once considered normal—be it slavery, a sweatshop, or sexual harassment—is seen to be profoundly immoral. When it comes to protecting a livable planet for our children, we have come to that moment: climate change is already causing the deaths of over 150,000 people a year, the relocation of entire nations and the collapse of ecosystems.

The financial sector is not only morally culpable in this crisis, it is enabling it — many proposed new fossil fuel projects would not be possible without them. It’s about time that we showed them we’re not going to stand for their profiteering from destruction any longer. When we use our voices, together, we have that power.

Please join 350 Seattle and stand in solidarity with Mazaska Talks by signing this pledge to boycott the banks funding the climate crisis.

Here’s what to ask mayoral and council candidates