We caught up with Dr. Sarah Myhre, an advocate, science communicator, paleoceanographer, and outspoken feminist and anti-racist. Among other credentials, she is a Kavli Fellow with the National Academy of Science, a founding member of 500 Women Scientists, and a board member for the Center for Women and Democracy. The interview has been lightly edited for clarity.

Q: You seem to be doing so much with both your scientific work and your science communication. How do you make that possible?

DR. MYHRE: Like many activists. I burned the candle at both ends. And I struggled to make sure that I’m really in a healthy and balanced center. I think many activists are usually time- or cash-strapped, and doing the best they can in challenging conditions. 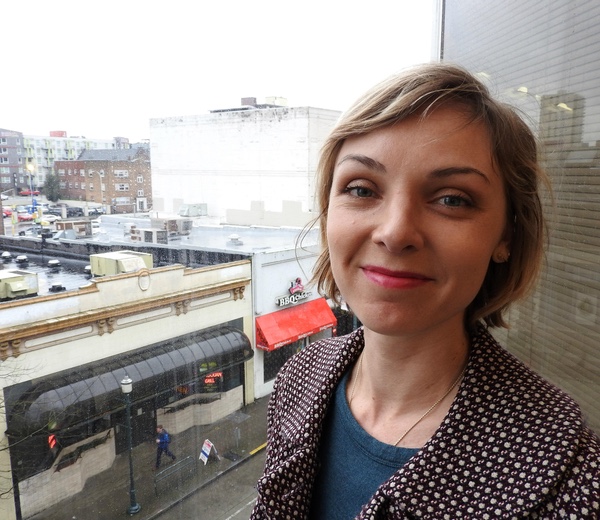 Q: Right. And one thing that struck me in looking at your interviews with The Washington Post and Mother Jones is that you’re really open about the emotional effects that both your research and your activism have, that you’re open about the climate grief and the anxiety. Do you think that being open about this can possibly help with science communication, if you can get your average American to understand what scientists are feeling as they face climate change?

DR. MYHRE: There’s a whole field of science communication, and that field has a lot of insight and recommendations that I try to use in public when I talk about climate change. One of the things that I have learned is that if you are talking with people about really hard information and you don’t recognize with them that, yeah, this is really tough information, it’s tough to process, and it’s tough to sit with… If you don’t recognize that and model that for people, then you are possibly shutting them down. And you’re definitely not working in a trauma-informed approach where you are honoring individuals’ agency and their own sort of emotional reckoning with the state and nature of this information. I do my best to try to model what people that are smarter than me tell me to do. [laughs]

Q: I read that in a way it’s not super effective to rely on facts to change somebody’s mind about these really crucial issues. Do you find that that’s true?

DR. MYHRE: There’s a common assumption in science communication and it’s called the information deficit model. The idea is that if you give people new information, they will make different choices. It’s predicated on a sort of two- dimensional characterization of the social, emotional, cultural milieu, and context by which people make decisions and form their identities. So instead you have to, I think, take a deeper, more complex view of how people interact with information, and that of course is also rooted in really excellent social science. The information deficit model has been proved to not work, and that’s because of the ways people attach worth and value to certain kinds of information, and then hinge their identity upon that information. Talking about climate change is not really about talking about science, ultimately. It’s talking about values and identity, political positionality, social positionality, all that stuff.

Q: Have there been innovations that have been particularly helpful in reaching people who are not sure about climate change or are even climate change deniers?

DR. MYHRE: There’s a great resource called the Yale Center for Climate Communication, and they do surveys of the public’s understanding and acceptance and alliance with the facts around climate change… people are all over the spectrum from very very concerned to totally dismissive and then denialist. No one message will be great for everyone, because all of this has a lot of coded identity and political orientation and values [baked in]. Not every messenger is the right messenger for every audience, too. There’s some real tactical positioning, as you communicate with public, and I think you have to recognize that you are not likely the best vehicle for many people. Instead you want to make space for those people too, to function and lead in this context as well.

Q: Have you been able to convince people you know personally or, at least have them open their mind a little bit through a more intimate conversation?

DR. MYHRE: I’m in a sort of in a bubble. My close friends are all women scientists, so I’m not convincing them of anything. And my family is a bunch of weird engineers and they also don’t need convincing. But I have been able to continue to cultivate… the idea that we are not meeting the climate change with a technocratic and top-down or reductive narrative about how to “fix the problem,” because ultimately the problem is fundamentally rooted in extractive economies and human rights violations. That [context] is where I get to do the most good in convincing my family and the folks in my life.

Q: That’s a really good point. Those of us in bubbles have our own kinds of convincing to do.

DR. MYHRE: For sure. And I think that convincing is really important for people who are in predominantly white bubbles. There’s a lot of work that needs to be done in communicating to white, left, liberal communities about why this is an issue fundamentally about racism and colonization, and that is work that white people should do. And to contribute to the restorative approaches to climate leadership that are necessary right now.

Q: Have you seen that happening in Seattle? That people of privilege, especially white privilege, have been ceding a little bit to people of color, or is that something that is a huge problem here?

DR. MYHRE: I mean, racism is so knit into the structural and systemic fabric of every single aspect of US life, that there’s no way it doesn’t reach into and characterize all the norms that are here in Seattle. We are in a particularly catalytic moment around understanding how the police execution of Black people in this country is the current form of a 200-year campaign of terror and murder. Climate change is happening alongside other social change movements, and they are relevant to each other. I hope white-led climate organizations and white leaders in this space are really paying attention and really showing up for racial justice.

Q: I also wanted to talk a little bit about what you’ve said about children. The children who are going to be the most affected are those who have been affected by redlining and other forms of prejudice that have harmed BIPOC for centuries. Of course, the issue is going to affect everybody, even if some less than others. How can parents who recognize climate change, and the threat that it represents, raise children to cope with the fear and the loss of climate change, but also to act?

DR. MYHRE: I’m doing this every day as a parent. But just for context, there are layers to this because there have been children born into this country for hundreds of years [whose] futures had been foreclosed upon. They came from genocidal contexts. They are the direct descendants of the human rights violations of slavery.

We are a nation of people who are determined to forget every single lesson that the past has taught us. And there’s real reclamation in knowing your own history upon that land and then acting with the ethical and moral stewardship of that history to try to address the wrongs that have been done.

Q: In our moment, there’s a recognition that environmental fascism could start emerging where maybe our leaders finally acknowledge climate change, but then decide that the only ones who can shelter from it or who can survive it are the ones who are already hyper-privileged. Is that something that we can start fighting against now?

DR. MYHRE: Well, I think that kind of environmental fascism is already occurring. We saw that with Hurricane Katrina, we saw that with Hurricane Maria in Puerto Rico, where thousands of American citizens were left to die because the leaders of our country did not recognize them as worthy of moral attention and moral value. So it’s already happening. We just need the language to identify it. And the way to back out of that is already happening as well. So every single transit equity, every single housing equity, every single regional climate program, every program that’s trying to put carbon back into the soil and you know, all of those iterative, small restorative steps towards making this country safer for everyone, that’s what is required to address this kind of environmental terrorism … that’s already happening.