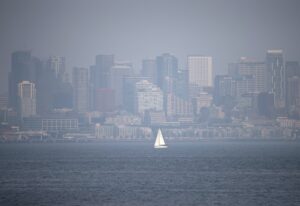 Seattle, WA: Hours ago, the City of Seattle released its greenhouse gas inventory for 2017 and 2018. The data, released by the Office of Sustainability and Environment, show that in spite of Seattle’s commitments to climate action, our city’s climate pollution continues to rise. Between 2018 and 2016, overall emissions rose by around 1.1%. Climate pollution emitted by Seattle’s buildings rose by a whopping 8.3%.

“It’s terrifying that not only are we not reducing our climate pollution in line with what science and justice demand, but we’re not reducing it at all,” said Alec Connon, Campaigns Co-Director with 350 Seattle.

One of the major reasons that Seattle’s climate pollution has increased is the significant number of new buildings that use methane gas for heating. In 2019, then-Councilmember O’Brien introduced legislation that would have banned gas in all new construction in the city; however, the legislation stalled after concerted opposition from Partnership for Energy Progress, a fossil fuel front group that includes the Western States Petroleum Association, TC Energy, and Enbridge Energy.

Today, Mayor Durkan is expected to submit improved energy codes that will increase energy efficiency standards in Seattle’s buildings, and prohibit the use of methane gas in commercial buildings over three stories, excluding ranges and fireplaces. The energy codes updates will, however, have no impact on the use of methane gas in new residential buildings or new commercial buildings under three stories, owing to limitations imposed by state law. The updates will also not have an impact on existing buildings, where methane gas used for space and water heating accounts for more than ⅓ of Seattle’s current climate pollution.

“It’s a good step that the new energy codes are moving forward, but they’re just the lowest-hanging fruit,” said Jess Wallach, Campaigns co-Director with 350 Seattle. “More than twenty cities in California have outright banned the use of methane gas in all new buildings, including residential homes. If the Mayor is truly serious about climate action, she’ll announce by Executive Order that Seattle will never build another home that will be heated by fossil fuels.”

Earlier this year, when Seattle City Council passed the JumpStart Seattle tax, approximately $22 million a year in new revenue was earmarked for transitioning Seattle homes off of fossil fuels. That work is expected to begin in 2022.

“It’s ludicrous that we’re going to start spending millions of dollars on getting fossil fuels out of Seattle homes, while at the same time, we’re still building new homes dependent on fossil fuels,” said 350 Seattle’s Executive Director, Valerie Costa. “The number one thing that Mayor Durkan can do to get us back on track is make sure that no new homes are built to be dependent on methane gas ever again.”