After a shaky start to 2022 with a resurgence of COVID-19 cases, climate activists in Seattle had an important cause to celebrate. Revenue returns from the 2020-approved JumpStart tax began to trickle in this past February: first $200 million, then $215 million, then finally, $231 million in projected revenue to support affordable housing, business assistance, community development, and Green New Deal policies for Seattle. The final revenue return was over $30 million more than what was originally anticipated.

The JumpStart tax, championed by City Councilmember Teresa Mosqueda (Position 8/Citywide), applies to large businesses with Seattle-based employees and at least $7 million in annual payroll. The tax kicks in with salaries above $150,000 per year and ranges from 0.7 percent to 2.4 percent.

The tax was designed to address some of the biggest challenges facing Seattle, further exacerbated by the COVID-19 pandemic, and make critical investments in developing a more sustainable, green city. The progressive tax is part of a hopeful trend across city governments in the United States to champion policies that decrease emissions, support clean water, and invest in infrastructure developments that address and prevent an increasingly hotter world. 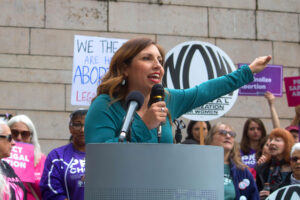 We caught up with City Councilmember Mosqueda, a frequent ally of 350 Seattle, to discuss the unanticipated returns of the JumpStart tax and the interconnected role of environmental, economic, housing, and labor policies in supporting sustainable communities in Seattle.

“We can’t have climate resilience without good access to affordable housing and good jobs. We can’t have healthy kiddos if they don’t have a safe place to play, clean water, and the ability to live in community. As we see more people getting pushed out of their homes due to global warming, more people are going to be coming to Seattle, and we need to build a city that is prepared to welcome them,” said Councilmember Mosqueda.

Councilmember Mosqueda, now serving in her second term, has dedicated her career to the health and wellbeing of communities. After starting her career in public health, Councilmember Mosqueda later joined the State Labor Council, where she saw firsthand the connection between labor and environmental policies in building better jobs, increasing public transportation options for workers, and ensuring workers at the forefront of toxic pollution have a right to defend their health in the workplace.

“When we bridge the false divides between labor and climate activists, we can truly create a blue green coalition, and that’s when we can really make change,” said Councilmember Mosqueda.

During her first term as City Councilmember in 2018, she was introduced to 350 Seattle via a forum we hosted, At Home in the World, focused on the intersection of livable, workable, community neighborhoods, climate injustice, and the need for zoning reform. The forum brought together climate justice and housing advocates to dispel the common notion that density is bad for the environment and to shine a light on how denser cities can support communities across Seattle with more affordable and climate-friendly housing options.

“With denser, taller, and greener cities, you cut down on growth in the suburbs, encroachment into wetlands and forests, and multi-hour commutes for workers. 350 also called out the specific racial injustice element of this discussion: the people who are getting pushed out of Seattle because of high costs of living and a lack of affordable housing are often communities of color and working families. Without change, we’ll only perpetuate that trend,” said Councilmember Mosqueda. She added, “The concept of a dense, green, walkable city is something I’ve been fighting for for a long time.”

Councilmember Mosqueda’s deep experience across labor, housing, public health, and environmental issues uniquely positioned her to lead discussions on the JumpStart tax in 2020. After the city faced budget cuts and a growing need to support communities through the COVID-19 pandemic, it became clear that a progressive tax on businesses doing well during the pandemic could have a significant impact.

Now with $231 million in revenue in its first year, Councilmember Mosqueda is hopeful for the impact this will have on direct Green New Deal investments.

“In our JumpStart spend plan, revenues are dedicated specifically to Green New Deal policies so that we never lose sight of why this proposal was put together in the first place. It came together with folks like 350 Seattle at the table saying we want there to be a specific Green New Deal investment,” said Councilmember Mosqueda.

The revenue will primarily be directed by a Green New Deal advisory board, which Councilmber Mosqueda says flips traditional power dynamics wherein city leaders are typically the primary decision makers on how funding gets allocated. “The board will be made up of folks who have direct lived experience and are subject matter experts on how we can deploy those dollars so that they are directing the city on how to prioritize those funds,” said Councilmember Mosqueda. (350 Seattle Campaigns Co-Director Jess Wallach is one of the advisory board members.)

An estimated 9% (or about $20 million, conservatively) of the annual revenue return from JumpStart is expected to be allocated by the Board to Green New Deal investments like transitioning homes from fossil fuel use to electricity, as well as other energy efficiency strategies to ensure affordability for residents, with a focus on communities most impacted by the climate and affordability crises. Monies will also be invested in job training programs for just transition and outreach to BIPOC communities to create pathways to good green jobs for local communities. Additionally, overall funding from the tax will support policies which Councilmember Mosqueda says are at the nexus of Green New Deal commitments, including more affordable housing; equitable community development that helps root communities most at risk of displacement by providing services like childcare and space for small entrepreneurs paired with culturally appropriate housing and community space; programs that help diversify our local economy and improve job quality; funding to support small businesses and their employees; and greater investments in green spaces and parks for the city.

The potential impact could be massive for the city, moving forward on many fronts at once to build a more sustainable, resilient Seattle. Councilmember Mosqueda notes, though, there are still many challenges that lie ahead, including addressing fear and uncertainty for redefining what more sustainable Seattle neighborhoods and city spaces could look like in the future.

“We need to be able to have a conversation with folks who think these efforts are somehow counter to the character of a neighborhood. It is very much within the character of Seattle to have duplexes, triplexes, and to preserve parks and grow green space. We have to demonstrate these are good, powerful changes that will preserve and sustain our communities,” she said.

Despite the challenges that lie ahead, Councilmember Mosqueda remains hopeful: “I am hopeful and optimistic about the changes we’re seeing, including the most recent JumpStart returns and the impact they will have on creating a more economically resilient and equitable Seattle. I think we all need a little bit of hope right now,” she said.

She pointed out that Seattle isn’t the only city embracing more comprehensive climate policies. In Los Angeles, the city has set a bold target to reduce emissions to 50 percent below their 1990 level by 2025, with the goal to reach full neutrality of emissions by 2050. In November, Michelle Wu was elected to serve as Boston’s Mayor, running on an explicit Green New Deal platform in her campaign. And lastly, in Antelope Valley in California, the local transit authority is 18 years ahead of schedule in electrifying their public transit.

Such efforts can inspire others and have a multiplier effect—helping more cities learn the most effective and speedy paths forward. Seattle has long been a place that (mostly) said the right things on climate, while doing almost nothing. Finally, that’s changing, and the funding from the JumpStart tax can make a meaningful difference to our emissions. In leaders who understand both the intersecting issues and the barriers to change, people-powered groups like 350 Seattle have incredibly valuable allies.  “I’m excited to keep working with 350,” said Councilmember Mosqueda.

We are, too. There’s not a moment to waste.