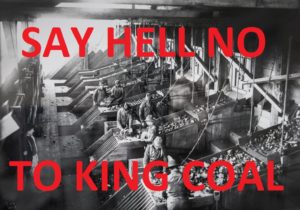 We thank King County Executive Dow Constantine for pledging to reject the John Henry No. 1 coal mine and urge Washington Governor Jay Inslee and Director of Ecology Maia Bellon to commit to protecting our region from this coal mine and other dangerous fossil fuel projects.

Pacific Coast Coal Company is trying to recommence coal mining at the John Henry No 1 Coal Mine just outside of Black Diamond, WA.

PCCC would mine about 123,000 short tons of coal per year for six years–coal that would emit as much carbon dioxide into the atmosphere each year as driving 51,500 cars at exactly the moment when we need to drastically reduce emissions.

Despite this, the federal permitting agency for the mine, the Office of Surface Mining Reclamation and Enforcement, has found that the reopening of this mine would have “No Significant Impact” on our health or environment.

Coal is the dirtiest fossil fuel, emitting twice as much CO2 as other fossil fuels. With our climate on the brink of collapse, a rapid transition to 100% renewables is our only option. The reopening of the John Henry coal mine fundamentally undermines Washington State and King County policies on coal and climate change.

We the people of King County, committed to a just and livable future, can never let this dirtiest of fossil fuel projects see the light of day.

In order to ensure King County remain coal-free, we demand that:

We know why they want to reopen the mine: renewing active mining permits is a way for PCCC to delay its legal responsibility to implement the required cleanup and reclamation. If the mine is not re-opened, PCCC is required to begin reclamation immediately.

The Washington State Department of Ecology and King County Department of Permitting have both stated that the mine is not up to current standards and that the federal review is inadequate. King County Executive Dow Constantine has said that he will fight this with every tool at his disposal; we need Governor Inslee and Director of the Department of Ecology Maia Bellon to do the same. This hazardous and climate-wrecking project cannot not move forward. As the people of Washington state, we call on them to come out publicly in opposition to this project, and to outline a plan of resistance to coal in King County.

We are here to permanently revoke the social and legal license for coal in Washington state. Join us in stopping the John Henry Coal mine!