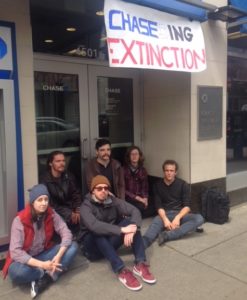 A couple years ago, I was watching events at Standing Rock unfold. At the time, the 2016 election was kicking into gear and the world felt increasingly, hopelessly complex. The world grew bigger as I became smaller. Whether it was yet another police shooting, the war in Syria, or a pipeline protest, I felt powerless to make anything change. But Standing Rock seemed different, and events since then have confirmed that perception. It seems like the protest never died, just spread to other locations.

Watching water protectors face the brutality of local police, counterterrorism tactics from private companies like TigerSwan, and hostility from elected officials was infuriating and compelling. I believe their cause is just, their tactics sound, and I admire their bravery. What stops me from joining them?

It was around this time I found out about 350 Seattle and took the Pledge of Resistance, committing to direct action, civil disobedience, and if necessary arrest. Since then I’ve been part of several demonstrations and two arrestable actions. The first was on May 8th, when 13 Chase bank locations were shut down around Seattle in protest of their funding of tar sand oil pipelines. The second was on October 23rd where we targeted over 100 banks in Seattle that fund pipelines, disrupting business and locking down inside the building. Both times I was arrested and still face potential charges.

While Standing Rock was the match for me, the fuel was more personal. I wondered about my impact on the world, whether anything I did mattered, whether I’d die having lived a comfortable but meaningless life. Friends of mine are having children now, some I’ve known since elementary school. One two-year-old girl in particular came to represent something more for me. I get to be an uncle to her and that changed how I felt towards the world. I wanted to make it better for her and found myself worrying what the world would be like when she grew up. Would she see the beauty of the Salish Sea? Would she live in fear of ravaging storms? Would she worry about having clean water? Imagining her face probably more than anything, compelled me to act. But joining with the people at 350 Seattle kept me going.

When I’m blocking the doors of a bank, or protesting Puget Sound Energy’s LNG plant, or simply calling my legislator, I feel part of a whole. I’m supported, encouraged, and needed in the fight for climate justice. Often I’ve marveled at the quality of the people at 350 Seattle. They’re kind, determined, and self-sacrificing. They take personal risks for all of us, and often do so while anxious and afraid. They do so because they think beyond themselves, they think about the planet, about the future, about their children. It’s easy to be overwhelmed with the chaos in the world, but when I’m with 350 Seattle, engaging in direct action, I feel calm. Nothing any one of us can do will ever be enough but if there are enough of us doing it we can build bridges to a better world.

Seattle is my home, and the people that live here are my neighbors. Engaging in civil disobedience is an act of service to my community, it’s a statement of the value I see in others, and the future I believe in. If fighting for climate justice compels you, I encourage you to take the pledge and stand with us on the “thin green line.”

Inspired? In addition to risking arrest at actions, Barry is training to be a police liaison. Click here to sign the Pledge of Resistance and check out this Police Liaison training on March 28th from 7-9pm at Prospect UCC (1919 E Prospect St., Seattle WA 98112).