The Cause that Connects Us

The day after election day, feeling fear and dread, I boarded a bus to Pioneer Square, where I met with a group of organizers who shared my worries. Before joining a larger protest for justice, we gathered in a circle and sang together, “count every vote” and “protect every person.” Although we were singing about fair elections, it was clear from the beginning that this wasn’t merely a protest to protect “democracy.” I was struck by how many different groups were present, from abolitionist and Black Lives Matter to socialist and climate justice groups. Leaders from these groups gave passionate speeches that touched on everything from prison abolition and violent policing to the instability and exploitation of capitalism. The socialist group, for example, spoke about the electoral college, the power elite, and the facade of democracy. This was a protest for a broader vision of justice, and represented cross-movement solidarity. 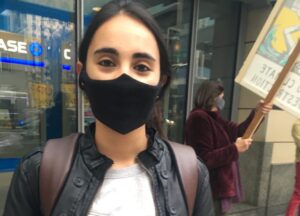 Fired up by the speeches, I marched uphill, carrying a heavy sign and resisting winds that nearly knocked me down. I was moved by the vision the march represented: Whether the primary battle for any one of us was racial justice, climate justice, or free and fair elections, all of us were fighting an ideology that puts profits before people and the planet. We were and are fighting unfettered capitalism and all the exploitation it entails — for example, fossil fuel companies like Chevron and Shell aggressively seek profits no matter the environmental degradation and impacts to community health; and dirty energy projects, such as pipelines and plants, disproportionately pollute Black, brown, and Indigenous communities — Cancer Alley in Louisiana is one example of many. These companies are hard to regulate or dismantle because of their economic stronghold and political power. What drew me to this movement was witnessing widespread determination to dismantle this system of oppression from the ground up.

Empowering ordinary people by building mass movements presents a powerful challenge to exploitative corporations and power-hungry politicians, as the youth-led Sunrise movement has shown. Like the gusts I struggled against as I marched, entrenched systems such as capitalism can knock us back and keep us down, feeling afraid and powerless. But I was able to make it up that hill, and to process my fears and take action, because we had all shown up together. That’s the only way we’ll win — if we fight together, hold each other, and help each other rise up.

I got involved in the recent Solidarity Budget campaign because it was an excellent example of such a fight, made up of many groups in many movements. The campaign demanded a City budget that defunds the police to free up resources for vulnerable communities that have suffered for far too long under systems of oppression. It envisioned a budget that invests in in affordable housing, healthcare, education, a Green New Deal, mental health, and other vital needs that will help our communities thrive, and not merely survive.

The campaign launched in September, 2020, forming a broad coalition of more than 200 groups, including racial and environmental justice organizations, labor unions, service providers, art and cultural organizations, and other community groups who committed to work together to win an anti-racist 2021 budget toward a healthy future for everyone. These groups include Black Action Coalition, Everyday March, The Engage Team, King County Equity NOW, Got Green, Sunrise Seattle, Mazaska Talks, 350 Seattle, Climate Justice for Black Lives, Puget Sound Sage, and Transit Riders Union. Underlying such diversity was a shared understanding that budgets are moral documents; they show how our leaders prioritize community needs, and the kind of world we envision. The Solidarity Budget was a moral demand representing solidarity across movements.

The Solidarity Budget asked for $1 million toward starting Seattle’s transition to clean energy. Like the demand to defund SPD, this is about divesting from harmful systems. My passion is climate justice, and I was drawn to the campaign because I wanted to help others see that acting on climate in just ways can connect us all together. Investing in clean air and water, climate and community resilience, healthy food, access to nature, and a sustainable environment for everyone means standing up to powerful vested interests. We must protect frontline communities not just from racist policing, but also from racist policies and practices that pollute the neighborhoods of Black people, Indigenous people, and people of color — and the policing and polluting are connected, because the police institutions that inflict violence on these communities are funded by the fossil fuel industry.

Marginalized communities don’t only face the highest rates of police violence; they also face the worst effects of the climate crisis and the local pollution that causes it. Valuing the lives in these communities means blocking all attempts to build dirty pipelines and power plants, as well as other toxic projects in their neighborhoods. No lives should be sacrificed for profits. As Rev. William Barber states in How to Win a Green New Deal, “A future free from the polluting economy of extraction is inextricably tied to a future free from the systemic exploitation of white supremacy …” That’s one of the shared principles that drew together so many groups and individuals to fight for the Solidarity Budget.

Katie Wilson from the Transit Riders Union points out, “Part of the reason that all of these 200 organizations came together in the Solidarity Budget is to resist being pitted against each other. So that instead of fighting over crumbs, we can all get together and fight for a bigger pie.” The budget had some success in winning its demands to divest from overfunded and violent institutions, and invest in the health and safety of the city’s most vulnerable residents — and in doing so, taking important steps toward that bigger pie.

Building powerful solidarity creates meaningful change — but there is far more work to be done. More funding is needed for the Green New Deal; SPD’s budget should have been cut by at least 50%; and although 150 SPD positions were eliminated, officers leaving will still be replaced. Community members continue to strive for further divestment from SPD and investment in community-led alternatives, to decriminalize poverty and mental health, and for real public safety, progressive new revenue sources, and investments in Green New Deal solutions that include clean energy, good union jobs, and affordable housing. Daniel McGraw of SHARE — a grassroots organization led by individuals who are experiencing or have experienced homelessness — stated at a community teach-in in November, “The political struggle doesn’t end when the budget season is over. It’s a political struggle all year long. We pledged solidarity to our mutual efforts and warn you that protecting the gains in this budget just passed won’t be easy. But together we can do it.” (Emphasis mine.) The Solidarity Budget Campaign continues to give me hope and reinforces my belief in the power we hold when we work together toward a shared goal, a bigger pie.

As I marched and protested on that windy, rainy election day, I nearly fell over, but I yelled, “I’ve got this!” An organizer saw me pushing on and yelled back, “I love that!” Their words kept me going, as did all the support from other members in the crowd. We can do this, but only together.

Raising Children in a Warming World