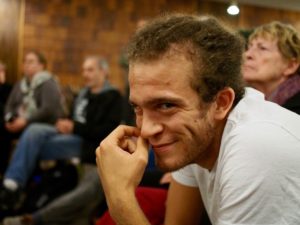 As May 8th turned into May 9th, I sat in a holding cell watching police officers shuffle papers and stride slowly through the booking facility of King County Jail. I had been there since the late afternoon, after being arrested outside a Chase Bank in Seattle’s U-District for protesting the bank’s role in financing fossil fuel infrastructure projects. I didn’t know when I was going home, whether I was due to be released in the early morning hours, or if I would have to stay the night in jail and appear before a judge in the morning. Above the main counter, where I had hours earlier been booked and given a red jumpsuit, hung a kitschy sign one would expect to grace the walls of a suburban home that proclaimed “You are entering a stress free zone.”

I am a child of a home fractured by divorce, an alumni of a competitive Ivy League university, and a current graduate student researching climate physics at the UW, and I had never been more stressed than I was sitting in that cell. Feelings of guilt, anxiety, and worthlessness congealed over the hours and sank deep into places I had not anticipated or prepared for. I felt that I had let my friends and family down somehow, that my actions would jeopardize my important relationships and academic aspirations. As my thoughts ran in self-deprecating cycles, I kept passing the question of why I had done this to myself? Why had I put myself at the mercy of the Seattle Police and the criminal justice system? Why had I taken this action, when I had the option to cease and desist?

The answer remains elusive, but part of it relates to the responsibility I feel, both as a scientist and a citizen, to promote environmental justice. I believe climate scientists are uniquely equipped to participate in this movement, as important rhetorical shifts have already taken place that destroy the boundary between the traditionally disparate spheres of societal action and scientific inquiry. The Intergovernmental Panel on Climate Change’s consideration of emissions scenarios (business as usual vs. aggressive changes in fossil fuel policy) for the next century is a glaring example of how this partition is being demolished by those in the scientific community: experiments on computers are now being required to account for the actions of human collectives.

Climate scientists may have helped to articulate the effects of climate change, but the community’s participation in influencing the scenarios that they have already put forward has been characterized by an unwillingness to acknowledge the connections between the causes of climate change and other manifestations of socio-political violence. The reasons I would not move from my spot in front of Chase Bank center on my belief that their corporate policy represents a heinous disregard for both the indigenous people who would be harmed by their investments, and for the climatic disruption that a well financed fossil fuel industry is in the process of accelerating.   As a citizen, I felt compelled to stand in their way because the rights of human beings come before the interests of corporations; as a scientist, I felt required to resist because when I work through the model output and data every day, I find myself thinking that scientists, of all people, should know and act better. We should know better than to eschew political action. We should know better than to act like science is carried out in a social vacuum. We should know better than to think the problem will go away just because we think we understand it.

I still worry about the consequences of the actions I took outside Chase Bank that day. I worry that I am a person with a Puerto Rican last name with a pending case against me, just like I worried when the officer came into the cell at 2:30 A.M. and barked “VARGAS!” at me when my time came to be released. I don’t know what the consequences may be, but I have faith that the echoes of my actions, and the actions of those who protested and were arrested with me, will resonate with others who feel impelled to resist in their own spheres of influence.

Atmospheric scientists invented the mathematical tools associated with “chaos theory” because they needed a way to quantify how small changes to the initial conditions of a system could result in the discovery of a new equilibrium state. The idea that seemingly insignificant perturbations to a system have a tendency to grow exponentially is helpful to me when justifying actions that, on a superficial level, can be (and are often) critiqued as meaningless. The science I study every day teaches me that this criticism does not add up. I am encouraged now, as I was when I fell into the arms of my friends upon being released from jail, at the potential of direct action to push society’s chaotic systems into a realm of justice.

Protect What You Love album coming!