I was recently elected to 350 Seattle’s board of directors. Those of you who know me well know I’m a librarian by trade, and reading is one of the ways in which I make sense of the world. For years, I read about climate change, but I became involved in climate justice fairly recently, when I realized that we as a society can no longer expect that our elected leaders will treat this issue like the crisis it is. On some level, I’d also been looking for a community: a group of people whose values were similar to mine and who weren’t afraid to take action in all sorts of ways to live those values. Whether it’s showing up to city council budget hearings to advocate for a more liveable city for all, canvassing for a carbon fee on corporate polluters, supporting the Puyallup tribe in their fight against a fracked gas facility, or holding big banks accountable for their investments in tar sands infrastructure, I’m proud of the transformative work that this organization is engaged in. 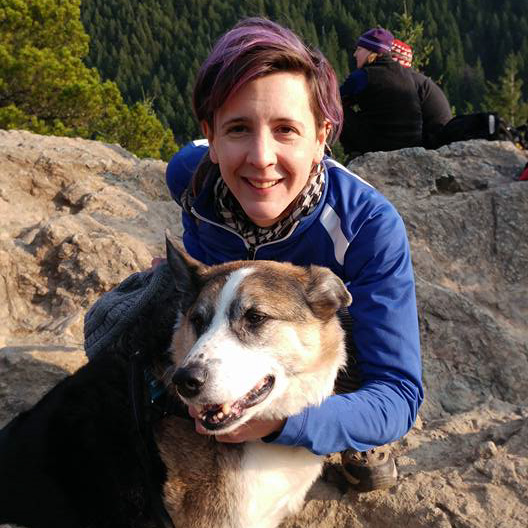 I’ve been thinking a great deal about hope in the past year. There is no denying that we are in dark times, certainly the darkest era I’ve seen in my lifetime. And that’s why hope is so vital. We can choose to succumb to cynicism and despair, we can stand idly by and wish things were different, or we can choose a path of collective action — of working together with our friends, our neighbors, in our communities, and even forming global networks of direct action, resistance, and mutual aid. Having hope is all about recognizing that, as author Arundhati Roy says, “Another world is not only possible, she is on her way. On a quiet day, I can hear her breathing.”

If we’re willing to peer into that darkness and imagine the world in which we want to live, the world in which we want future generations to live, and then get up every morning and take small steps toward making that world a reality while acknowledging that we may not see it in our lifetimes, then we are creating a climate of hope. And that is why the work that 350 Seattle is doing is so important to me. When I think of the battles we’ve won, and the battles we’ve yet to win, it brings me hope. And as the brilliant essayist Rebecca Solnit says, “Hope is a gift you don’t have to surrender, a power you don’t have to throw away.”

We have it within our power to make change. Whatever your talents and interests, there are so many ways that you can be involved in this work. I’m a bit of a theater geek, so perhaps it’s not surprising then that in the past couple years I’ve found myself dressed up in a bright yellow hazmat suit, occupying banks in Seattle, and performing street theater to bring attention to Chase’s funding of tar sands pipeline projects. And while this definitely involved me moving outside of my comfort zone, it was also really fun. I’ve made connections and friendships that I believe will last for the rest of my life. And it’s thanks to these connections and that support that I felt ready to take a risk and use my privilege to get arrested and hopefully bring more attention to the seriousness of climate chaos. (Now I’m not asking you all to get arrested, but if you’re interested in talking about it, come and find me sometime).

We have an amazing group of people from all walks of life who are engaged in this fight. Some of them have radically rearranged their priorities and sacrificed financial stability to become more involved with 350 Seattle, but they can’t do this alone. Doing this work takes a great deal of organizing, coordinating resources, and providing logistical support. And that’s where we all come in. We are spending the next few weeks trying to raise $6000 more for 350 Seattle’s work — the remainder of our original goal of $20,000 that’s being matched by an anonymous donor. I’m asking you to ask yourself what you can donate. Please donate an amount that is meaningful to you. Or become a monthly donor, of which we now have almost 200. Think about how much you pay a month for coffee, or perhaps for Netflix, or some other small indulgence. Would you be willing to match that amount with a regular donation? Or maybe give a little more? I’m asking you to make a gift that feels significant to you, as significant as the work we’re doing. We all have different financial circumstances and no amount is too small. Most of all, thank you for continuing to engage in and support the work of 350 Seattle. Without you, without us, none of this would be possible.