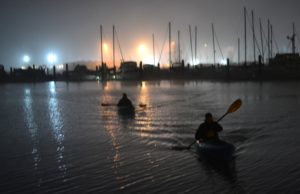 FOR IMMEDIATE RELEASE: Activists to be arraigned today for lockdown on crane at PSE’s LNG plant

Activists locked themselves to a crane for nine hours at the site of the proposed Puget Sound Energy (PSE) liquefied “natural” gas (LNG) facility at the Port of Tacoma yesterday—halting construction of an 8 million gallon storage tank all day.

Though it lacks essential permits and has been issued a Notice of Violation by the Puget Sound Clean Air Agency following a Work Stop Request by the Puyallup Tribe in August, PSE has continued to build the facility, which is adjacent to the Puyallup Tribe’s reservation boundaries.

“If I tried to build an addition to my house without permits, the City of Tacoma would make me stop, and might require me to undo the work done. If a powerful corporation like PSE can get away with what is happening here, then the community has to take a stand,” said Stephen Way, a 72-year-old Tacoma grandfather and one of the two men locked to the crane. The pair had kayaked across the Hylebos Waterway in the pre-dawn hour, scaled a fence, and then climbed the crane.

Way and Carlo Voli, 52, an activist with 350 Seattle, will be arraigned today at 1pm PST.

PSE touts the project as producing a cleaner shipping fuel (although better alternatives exist, including low-sulfur diesel) and as a source of jobs (though it will only create 18 jobs). The Puyallup Tribe points to a litany of issues: it risks their waters, salmon, and treaty fishing rights; an explosion would have a 3.5 mile blast-zone range, endangering adjacent communities; and the Port of Tacoma sits in a zone at risk for earthquakes, lahars and tsunamis.  Other Tacoma community members add that emissions from the liquefaction process will worsen the already unhealthy air near the Port; that there has not been proper regulatory process by the City and Port of Tacoma; that over 40% of the price tag for the project will be paid by PSE ratepayers; that PSE has created a shell company in order to avoid liability in the event of a disaster; and that the project would facilitate the poisoning of waters, land, and communities at fracking well sites.

“The time for talk is over—the planet is on fire and in dire need of first responders,” says Robert Satiacum, Puyallup Tribal member. “Disregarding the Puyallup Tribe’s objections is criminal: No means no.”

Climate activists are also concerned that this project will lock the region into “natural” gas use for decades to come; recent studies indicate that fracked gas is as bad as coal in its climate impacts. With the increase of extreme weather patterns, sea level rise,and forest fires, they say we can no longer afford to build new fossil fuel infrastructure.

Today is also the continuation of the trial of two women (Cynthia Linet and Marilyn Kimmerling, part of the “Super Six”) for a direct action at the same facility in May.

Activists from the #NoLNG253 coalition say that yesterday’s action marks the beginning of a new wave of public opposition to this project. They are calling for people from around the region to converge on Tacoma on the morning of the 18th of December to slow construction of the plant while the final regulatory processes are underway. 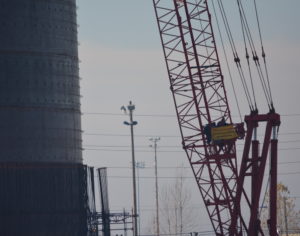 We WILL stop Tacoma LNG